Skip to content
Home
/
The New Crossover Members of the House

— Republicans won a slim House majority at least in part by winning more victories in districts that Joe Biden carried than Democrats did in districts carried by Donald Trump.

— There are currently slated to be 18 Republicans in Biden seats and just 5 Democrats in Trump seats.

— It is common for the opposition party in Congress to add to their roster of crossover districts in a midterm, and that’s exactly what happened in 2022, despite Republicans having a disappointing election overall.

With vote counts near final across the country, it appears that Republicans are on track for a 222-213 majority in the U.S. House, a mirror image of the small majority that Democrats won in 2020. When a party wins such a small House edge, there are all sorts of factors that one can reasonably argue was crucial to the outcome.

One of those, undoubtedly, was the Republicans’ superior ability to win districts that did not vote for their party for president in 2020.

The overall number of “crossover” districts — seats that vote for one party for House but the other party for president — has been generally on a downward trajectory. Table 1 shows the number of crossover districts since the 2000 election. 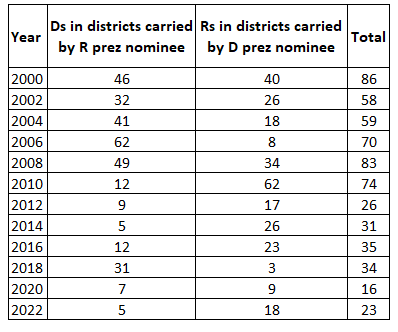 Prior to the Republican Revolution of 1994, when the GOP flipped the House for the first time in 4 decades, it was much more common for Democrats to win on hostile territory than vice versa. One can see that ancestral Democratic legacy even in the first decade of the 2000s. For instance, in 2004, Democrats had about twice the number of crossover members than Republicans did even as Republicans won the House and George W. Bush won reelection.

There are a lot of other things going on too, like partisan realignment sometimes happening at the presidential level first and then bleeding down the ballot, leading to split outcomes in the interim. Nearly half of the Trump districts that Democratic House candidates won in 2018 turned around and voted for Biden in 2020. We also don’t want to discount the legitimate crossover appeal that some Republican candidates have demonstrated in recent cycles (and that some Democrats have shown as well).

As Table 1 shows, it’s common for the opposition party to cut deeper into the other side’s turf during midterm years. The number of crossover districts captured by the opposition party spiked in each of the last 5 midterms. So even though Republicans had a somewhat disappointing year compared to the last 4 midterms — all elections we can classify as waves — this trend still held, although 2022 was also a redistricting year, unlike the previous 4 midterms. New lines contributed to changes in crossover district membership: For instance, Rep. Elissa Slotkin (D, MI-7) saw her district changed from a narrow Trump district to a narrow Biden one. Given that she ended up winning by about 5.5 points, it stands to reason that she would have held on in her old district as well. But she is not on our list, because she won a Biden district.

In 2000, about 20% of House members came from crossover districts. While the total fluctuates over time, in this election just about 5% of the total House membership will come from crossover districts. Assuming John Duarte (R) does in fact win in an open-seat race in CA-13 — he narrowly leads Adam Gray (D) but the race is not yet called — there will be 18 Republicans in districts that Joe Biden won in 2020 and just 5 Democrats in districts that Donald Trump carried in the last presidential election. Table 2 shows those members. 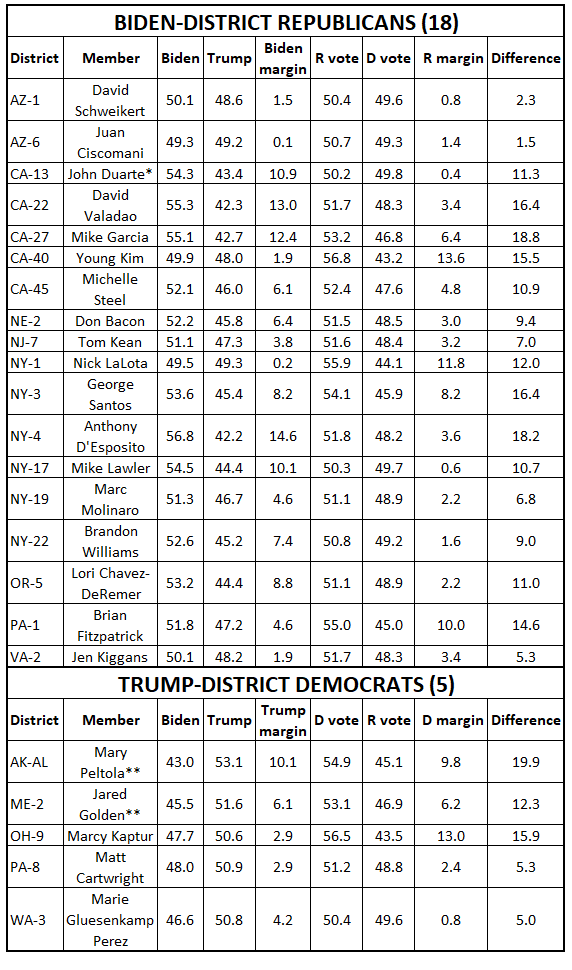 There is a lot to digest on Table 2, but take a look especially at the final column on the right. This compares the 2020 presidential margin to the 2022 House margin — how many points each crossover winner ran ahead of their party’s presidential margin from 2020. The difference between the presidential and the House results was relatively small in several instances. For instance, Rep. David Schweikert (R, AZ-1) and Rep.-elect Juan Ciscomani (R, AZ-6) won districts that are very marginal at the presidential level, and they won marginal victories themselves this year.

Others ran more clearly ahead of their presidential standard bearer from 2 years ago. The biggest overperformer here was Rep. Mary Peltola (D, AK-AL), who ran roughly 20 points ahead of Joe Biden’s 2020 showing in Alaska. There is something of an asterisk on this race: Peltola’s final 10-point margin came after a ranked-choice voting process that saw her and 2008 Republican vice presidential nominee Sarah Palin (R) go head-to-head once again after Peltola beat Palin by 3 points in a ranked-choice special election earlier this year. So, one could argue that her margin is not directly comparable to elections in other places that do not utilize this system.

There were several Republicans who performed nearly as well as Peltola did compared to the 2020 presidential results, including a couple of newly-elected Republicans in the New York City suburbs, Reps.-elect George Santos (R, NY-3) and Anthony D’Esposito (R, NY-4). Additionally, several California Republicans posted impressive overperformances in both 2020 and 2022, such as Reps. Mike Garcia (R, CA-27), Young Kim (R, CA-40), and David Valadao (R, CA-22).

Naturally, many of these districts will be top targets in 2024. For instance, Democrats may reasonably believe that higher Republican engagement paired with a weak campaign by Gov. Kathy Hochul (D-NY) hurt them in New York. The Albany Times Union recently reported that Republican turnout in New York far outpaced Democratic turnout, with GOP turnout reaching presidential levels on Long Island — where Republican House candidates performed exceptionally well, including flipping NY-3 and NY-4. In a presidential year with more normalized turnout, Democrats very well could have a good opportunity to grab these districts back.

On the other hand, it may not be a fluke that some of the California Republicans are outrunning presidential partisanship by a considerable degree, given that it’s now happened in a couple straight elections. Democrats surely will prioritize several of those districts in 2024. In at least one of them, CA-27, Democrats also will hope to find a stronger candidate than former state Assemblywoman Christy Smith (D) against Garcia (Smith has now lost to Garcia in 3 straight elections and is not well-respected by campaign operatives, for what it’s worth).

Republicans, meanwhile, did not have particularly strong candidates in any of the 5 Trump districts that they lost to Democrats — and they had downright awful nominees in OH-9 and WA-3, where Rep.-elect Marie Gluesenkamp Perez (D) beat fringe candidate Joe Kent (R) in what was one of the biggest upsets of the night. If outgoing Rep. Jaime Herrera Beutler (R, WA-3) had advanced to the top-2 general election ahead of Kent, it is very likely that she would have been reelected.

Incoming Republicans from Biden districts would be wise to find ways to buck party leadership, if possible, as some other successful swing district Republicans have in recent years, like Rep. Brian Fitzpatrick (R, PA-1) of suburban Philadelphia. But with only a tiny majority, Republican House leadership will only have a few “hall passes” to hand out on tough votes. This was also the case with the 2020 Democratic House majority, although one of the remaining Trump-district Democrats, Rep. Jared Golden (D, ME-2), has highlighted votes against his party in his reelection campaigns, likely to good effect.

In 2020, Biden won the national popular vote by about 4.5 points, or a little more than 2 points better than Hillary Clinton’s 2016 margin (she won the popular vote by 2.1 points but lost the Electoral College). Based on data from Dave’s Redistricting App, Biden’s margin was better than Clinton’s in 19 of the 23 crossover districts.