— Democrats turned in an impressive victory in Tuesday night’s special election in NM-1. This comes a month after Republicans scored an impressive performance of their own in the first round of the TX-6 special.

— Democratic performance represented an improvement over both Barack Obama and Joe Biden’s showings in the district, though in some ways, it seemed more due to regional than demographic factors.

— Special elections were among the many indicators that pointed to a strong Democratic year in the House in the 2018 cycle. For a variety of reasons, specials may not be as useful of an indicator this time.

Breaking down the NM-1 special

A month after Republicans held serve in one of their districts in a House special election, Democrats did the same Tuesday night. Rep.-elect Melanie Stansbury (D, NM-1) easily defeated state Sen. Mark Moores (R) for the right to represent an Albuquerque-centered House seat that once was a battleground but now is solidly Democratic.

Stansbury won by about 24.5 points, 60%-36%, slightly outrunning Joe Biden’s 23-point victory in the district last November and clearly outrunning the 16-point victory by the district’s former representative, now-Secretary of the Interior Deb Haaland (D). This was an impressive showing for Democrats, at least from a historical perspective: According to friend of the Crystal Ball Jacob Smith of Duke University, this is the first time since Woodrow Wilson’s administration that the nominee from the president’s party did better in a House special election than a departed Cabinet appointee did in the previous November election.

Democrats appeared to take the race more seriously than Republicans did. While big outside Democratic groups did not feel obligated to spend money on television advertising for Stansbury, Democratic House members raised a considerable amount of money for Stansbury. Big-name Democrats, most notably First Lady Jill Biden and Second Gentleman Douglas Emhoff, visited the district to campaign on behalf of Stansbury. Democrats clearly wanted to avoid an embarrassment in NM-1, and they succeeded.

Does NM-1 confirm trends? It depends on how far back you look

Because of some of its demographics, NM-1 was seen as an interesting test case for how the parties would fare with certain constituencies with Donald Trump out of office. Specifically, a big trend from the 2020 election was Trump’s gains with minority voters — conveniently for the purposes of analysis, NM-1 is just over 50% Hispanic, by composition. At a broader level, the Trump era was defined by Democrats’ gains with college-educated white voters. Of New Mexico’s three districts, NM-1 is home to the largest population of college graduates — almost 35% of its residents over 25 hold a four-year college degree, compared to less than 30% for the state’s other two districts.

So how did these demographic groups vote in yesterday’s election? Map 1 looks at the Bernalillo County portion of NM-1. Housing Albuquerque, this county cast almost all (about 92%) of the district’s votes. Broken down by state House district, the top map compares Stansbury’s margins to Barack Obama’s in 2008, while the bottom image considers her numbers relative to Biden’s last year. 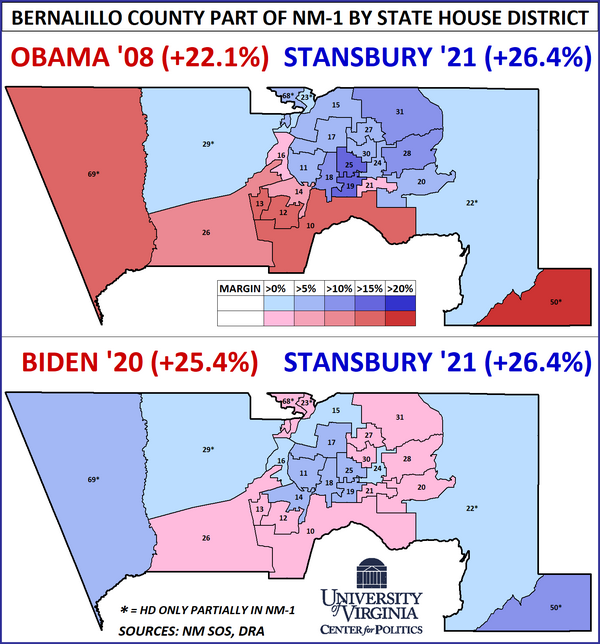 Stansbury beat Obama’s 2008 margin in the county by about four percentage points. As the Crystal Ball alluded to last week, the eastern part of the county is whiter and more suburban — it has moved Democratic relatively recently. Stansbury’s own state House district, HD-28, is located in this area. While Obama lost HD-28 by about two points in 2008, Stansbury carried it by just over 11% yesterday. This type of pro-Democratic movement was typical of most adjacent districts.

Much of the county’s Hispanic population is concentrated in the south-central region, where Stansbury clearly ran behind Obama’s numbers. As of 2019, seven state House districts were majority-Hispanic by citizen voting age population: Stansbury only beat Obama’s performance in one of them, HD-11.

So looking longer-term, yesterday’s result in NM-1 seemed to confirm the prevailing national trends. But when comparing Stansbury’s numbers to Biden’s more recent baseline, the results are mixed and the swings are less drastic.

As the lower image on Map 1 shows, Stansbury outperformed Biden’s margin by about 1% in the county — a slight improvement, and very impressive considering the pre-election expectations.

State House District 14 is one of the most heavily-Hispanic seats in NM-1 (as of 2019, it was 79% Hispanic). Stansbury posted a 6% gain over Biden there — larger than her districtwide improvement — but she did slightly worse in the demographically similar districts just south of it. Similarly, Stansbury ran behind in her own HD-28, but held up well in other white-majority areas.

Considering those divergent shifts, it may be better to say that Stansbury’s overperformance broke down more along regional, as opposed to racial, lines. She performed over 5% better than Biden in several districts located in the center of the county. This cluster includes HD-11, which takes in Downtown Albuquerque, and HD-18, which houses the University of New Mexico — perhaps the campaign simply emphasized voter mobilization in these areas.

Turnout was respectable in yesterday’s election — Bernalillo County cast about 40% of the votes that it did in last year’s general election, not a bad turnout when comparing an off-year House special to a very high turnout presidential election. Still, it may be difficult to draw firm conclusions from the result. While state House districts are useful in illustrating granular-level breakdowns, almost all of those districts in NM-1 cast fewer than 8,000 votes apiece, which could make for noisy results.

One trend that clearly did hold up from last year was the polarization of voting methods. At least in Bernalillo County, the Secretary of State reported the early voting totals first, then the Election Day votes (which tended to be more pro-Republican) trickled in. It initially looked like Stansbury carried the state Senate district that Moores represents by a 52%-47% vote — she still ended up (impressively) carrying her opponent’s seat, but by a much closer margin.

So far there have only been two special U.S. House elections in districts one could construe as competitive: NM-1 last night, and TX-6, which held an all-party first round of voting on May 1. Two Republicans advanced to a runoff there, with a Democrat narrowly finishing in third. TX-6 was a clear Republican overperformance, as the combined Republican share was much larger than the Democratic share: 22 points better than Trump’s three-point victory in the district. That said, TX-6 is more Republican down-ballot, and Republicans won the district by 10 points for House last year. National Democrats also did not put any effort into that race, just like national Republicans did not put any effort into NM-1.

During the 2018 cycle, it became common for analysts to compare the results in federal special elections to the 2016 presidential results. Generally speaking, Democrats outperformed Hillary Clinton’s showing in these races, which suggested that the Democrats were enjoying a better political environment than the previous presidential cycle. In 10 House special elections held in advance of Election Day 2018, the Democrats outran Hillary Clinton’s 2016 margin in eight of the races, often by large margins. The average improvement was 10.5 points. The special election results, though hardly featuring a large sample size, was one of several data points that pointed toward the Democrats having a good election in 2018, which they did on balance that year, particularly in the House. This indicator was bolstered by Democratic overperformances in the much larger universe of state legislative special elections as well. (So far this cycle, there has not been much overall partisan lean in special election results, according to calculations by FiveThirtyEight’s Nathaniel Rakich of both state and federal results.)

As we noted in a history of House special elections earlier this year, special elections are likelier than not to break against the White House party. With the Democrats now controlling the White House, we’ll be following these races throughout the cycle and looking for any signs they might be giving us about the overall political environment. So far, we wouldn’t read too much into the special results either way.

NM-1 was the fourth federal special election this cycle, although it’s only the third one that has produced a winner: The aforementioned TX-6 special election is going to a July 27 runoff between state Rep. Jake Ellzey (R) and Susan Wright (R), the widow of the district’s late representative, Ron Wright (R). Louisiana used an all-party primary system for its two House specials too. In those specials, Rep. Julia Letlow (R, LA-5) won her race outright, while Rep. Troy Carter (D, LA-2) won a runoff against another Democrat.

Table 1 compares the House special elections held in the 2018 cycle to those held so far in 2022. 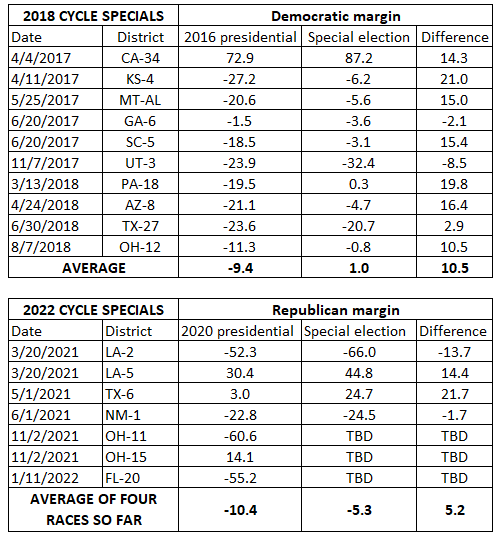 Note: 2018 cycle GA-6 results are for the runoff, not the combined tallies in the first round of voting. Results from CA-34 and TX-27 feature combined party totals (two Democrats advanced to the CA-34 runoff, whereas a Republican won outright in TX-27). 2021 LA-2, LA-5, and TX-6 results are the combined results from the first round of voting. TX-6 will be decided in a July 27 runoff between two Republicans.

The specials in 2017 were livelier than the ones so far in 2021. By this time four years ago, Democrats had turned in a surprising overperformance in KS-4 and had held their own in Montana’s at-large race. We also were in the leadup to the GA-6 special, which would become the most expensive House race of all time. In that race, Karen Handel (R) fended off Jon Ossoff (D) in a Democratic-trending suburban Atlanta seat. Handel ended up running a little ahead of Donald Trump’s 2016 margin in the runoff, but she would lose the following year to now-Rep. Lucy McBath (D, GA-6). Ossoff, meanwhile, is now in the U.S. Senate.

The four races so far have not attracted nearly that kind of attention, and the big Democratic and Republican outside groups that support their candidates in general elections have not fought TV air wars over this cycle’s races. Part of it has to do with the terrain: The two Louisiana seats are totally uncompetitive. NM-1 is very much left of center, leaving behind the swing district status it held a decade ago, and TX-6 likely is not as competitive as its presidential topline would suggest. Another factor is redistricting: By the time these districts are next on the ballot, they will have different lines, which could make any possible upset fleeting. Republicans control the redistricting process in Texas, and Democrats control it in New Mexico: Had either of them surprisingly lost a seat, they could have made alterations to the lines in order to take the districts back in November 2022.

One outcome of the lopsided tallies in TX-6 and NM-1 could be that partisan linedrawers in each state will not feel a need to shore up these districts in redistricting. New Mexico only has three districts, and Democrats could try to target the one Republican, Rep. Yvette Herrell (R, NM-2), by diluting the Democratic strength in the state’s other two districts. New Mexico recently established a redistricting commission, where both sides will have some input, but the Democrats who control state government are free to ignore its recommendations. Texas, which now has 38 districts, is much more complicated, but Republicans will maximize their advantages there to the extent they can in a state known for hard-edged gerrymandering, both by Republicans the past couple of decades and by Democrats in decades past.

Overall, there’s not a ton to take from the House specials so far. Both parties overperformed in their safe Louisiana seats. Republicans turned in a great performance in the TX-6 first round, while Democrats did very well in NM-1. Of the remaining specials currently scheduled, only one — OH-15 — could be considered even remotely competitive, and it’s still a double-digit Trump district.

So it may be that while House specials nudged analysts in the right direction in 2018 — toward what became a great showing for Democrats in the House — they don’t end up telling us much either way about 2022.