Skip to content
Home
/
The Outlook for the 2022 Senate Elections: A State-by-State Analysis

— Democrats now hold a tiny Senate majority in large part because of their superior performance in otherwise Republican-leaning states, a performance they may find difficult to sustain because of deepening partisan polarization.

— Based on the fundamentals of state partisanship, incumbency, and the national political environment, Republicans have a good chance to pick up at least a seat and take back control of the upper chamber. But poor candidates could hurt their chances, as they have in some other recent Senate races.

What the last decade’s Senate results tell us about 2022

In a previous article in the Crystal Ball, I examined the outlook for the 2022 House and Senate elections at the national level based on the generic ballot forecasting model. With Republicans enjoying a consistent lead of 2-3 points on the generic ballot according to the FiveThirtyEight polling average, the results indicated that the GOP was very likely to gain enough seats in November to take control of the House of Representatives. In the case of the Senate, however, the results indicated that the outcome was likelier to be close to a standoff. That was mainly because Republicans currently hold 21 of the 35 seats that are up for election in 2022.

Given the uncertainty of the overall results of the 2022 Senate elections, I decided to conduct a seat-by-seat analysis of all 174 Senate races since 2012 to see what factors have influenced the results of these contests. I then applied the findings from these earlier elections to the 35 contests taking place this year in order to predict their outcomes. The results of this seat-by-seat analysis were consistent with the national forecast from the generic ballot model. With neither party holding a clear advantage, control of the Senate will likely come down to a half dozen or so competitive contests in which the strengths and weaknesses of individual candidates could be crucial.

Table 1 summarizes the results of the 174 U.S. Senate elections held between 2012 and 2020, including special elections. Several interesting patterns are evident in these data. While the 2 parties split these contests almost evenly, with Democratic candidates winning 89 contests and Republican candidates winning 85, there was considerable variation from year to year. Democratic candidates won the large majority of contests in 2012 and 2018 while Republicans won the large majority of contests in 2014, 2016, and 2020. These differences in results reflected differences in the partisan makeup of the 3 classes of Senate seats as well as differences in the national political environment at the time of each election. 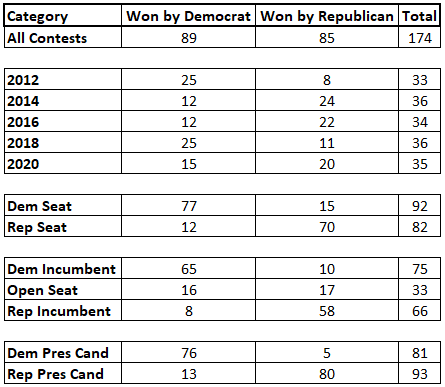 Note: Includes special elections held during year of election or during previous year. Three independent candidates — Bernie Sanders (VT), Angus King (ME) and Greg Orman (KS) — are classified as Democrats. Contests were only counted once per cycle, so the 2013 Massachusetts and New Jersey special elections were omitted because those same seats were also contested in the 2014 November general election. Several other special elections held concurrently with the general election are included, as well as the 2017 Alabama Senate special because it was only contested once during the 2018 cycle — the seat was next contested as a regular election in the 2020 cycle.

In the current era, Democrats generally have to win contests in Republican-leaning states in order to win a majority of seats in the Senate. However, this has become increasingly difficult, as partisan polarization has deepened. In the current 50-50 Senate, only 6 members represent states that voted for the opposing party’s presidential candidate in 2020 — 3 Democrats (Ohio’s Sherrod Brown, West Virginia’s Joe Manchin, and Montana’s Jon Tester) and 3 Republicans (Maine’s Susan Collins, Wisconsin’s Ron Johnson, and Pennsylvania’s Pat Toomey). 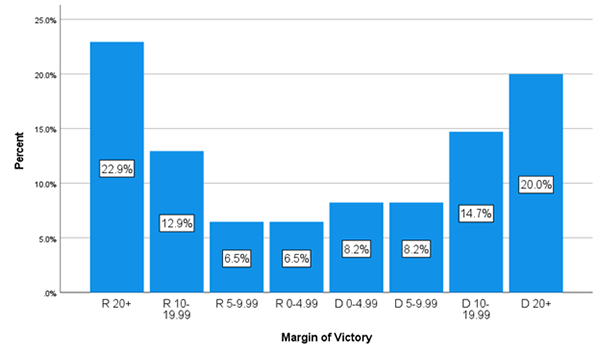 In order to estimate the contributions of state partisanship, incumbency, and election timing to the outcomes of Senate elections between 2012 and 2020, I conducted a multiple regression analysis with the Democratic candidate’s margin as the dependent variable. Independent variables were the Democratic margin in the current or most recent presidential election in the state, incumbency status (coded as +1 for Democratic incumbent, 0 for open seats, and -1 for Republican incumbents), and election type (-1 for Republican midterm, 0 for presidential, and +1 for Democratic midterm). The results are displayed in Table 2. 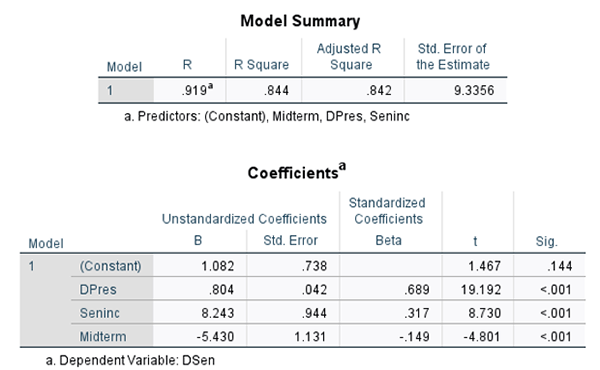 The results in Table 2 show that the 3 variable model was quite accurate, explaining 84% of the variance in the outcomes of individual Senate contests. All 3 predictors had highly significant effects, with state presidential partisanship having the strongest influence. This finding reflects the increasing nationalization of Senate elections in the 21st century. Along with the powerful influence of presidential partisanship, incumbency continues to have a substantial impact on Senate elections, with the average incumbent adding about 8 points of margin to her party’s expected vote. Finally, there is a clear midterm effect on Senate elections, with candidates from the party occupying the White House experiencing an average penalty of 5.4 points of margin. 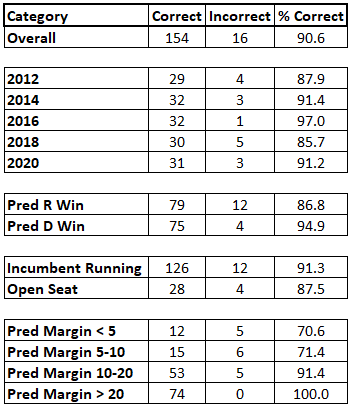 The other interesting finding in Table 3 is that the large majority of erroneous predictions, 12 of 16, involved Democratic victories in contests that Republicans were expected to win. This finding indicates that Republican candidates have underperformed in Senate elections relative to what we would have expected based on state presidential partisanship, incumbency, and election type. Republican candidates won 83 out of 170 contested Senate races between 2012 and 2020, but the prediction model indicates that they should have won 91. Given the narrow size of recent Senate majorities, that underperformance is quite significant. 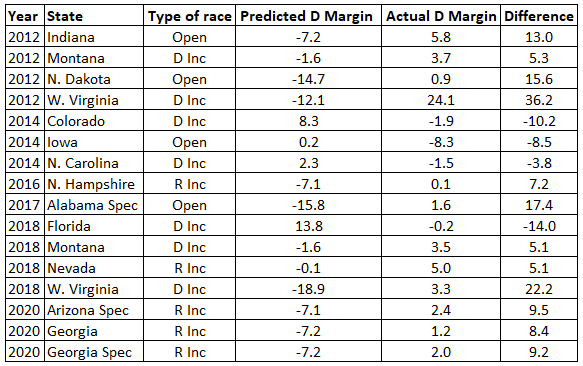 Table 4 presents data on the 16 Senate contests in which the model predicted the wrong winner. In several of these races, the discrepancy between the predicted and actual results was quite large. For example, in the 2012 Indiana Senate election, the Republican candidate was favored by just over 7 points but the Democratic candidate won by almost 6 points. The Republican nominee, Richard Mourdock, a staunch conservative, defeated the more moderate incumbent, Richard Lugar, in the GOP primary. Mourdock gained national notoriety for his comment that when a woman becomes pregnant as a result of rape, “it is something that God intended,” and went on to lose the general election to a moderate Democrat, Joe Donnelly.

An even greater discrepancy between predicted and actual results occurred in the 2017 Alabama special election in which ultra-conservative former state Supreme Court justice Roy Moore won a runoff primary against appointed incumbent Luther Strange to win the Republican nomination. After facing credible charges of child molestation, Moore went on to lose the general election to Democrat Doug Jones, a civil rights lawyer and former U.S. Attorney. Our model predicted that the Republican nominee would win the race by about 16 points, but Moore ended up losing to Jones by 1.6 points.

The most recent examples of Republican candidates losing races they should have won occurred in 2020 when the GOP lost 2 contests in Georgia and another in Arizona by margins ranging from 1-3 points that they should have won by about 7 points according to our model. In Arizona, Democrat and former astronaut Mark Kelly defeated the appointed Republican incumbent, Martha McSally, while in Georgia, Democrat Jon Ossoff, a documentary filmmaker and former congressional aide, defeated Republican incumbent David Perdue, and Democrat Raphael Warnock, pastor of Ebenezer Baptist Church in Atlanta, defeated appointed Republican incumbent Kelly Loeffler. Particularly in the 2 decisive Georgia Senate runoffs held in early January 2021, Donald Trump’s visibility and highly publicized claims of widespread voting fraud involving absentee ballots may have served to motivate Democratic voters while suppressing turnout among some Republican voters concerned that their votes would not be accurately counted.

Two of the biggest discrepancies between actual and predicted vote margins involved the same candidate: West Virginia Sen. Joe Manchin. In both 2012 and 2018, Manchin far outperformed the expected vote for a Democratic candidate in a state that Donald Trump carried twice by enormous margins. In these elections, it was not the unpopularity of the GOP challengers that explained the discrepancies, but Manchin’s extraordinary popularity as a former governor and relatively conservative Democrat. What all of these examples demonstrate, however, is that exceptionally popular or unpopular candidates or unusual circumstances can sometimes produce results in Senate contests that are well out of line with what would be expected based on factors such as presidential partisanship, incumbency, and the national political environment. 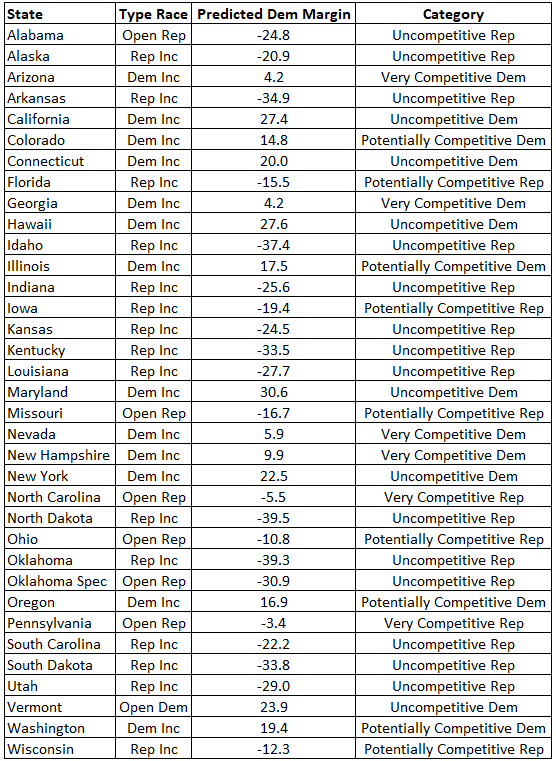 According to the results displayed in Table 5, only a small minority of Senate contests in 2022 are likely to be highly competitive. The most competitive races, with predicted margins of under 5 points, are expected to be in Arizona, Georgia, and Pennsylvania. These contests should be regarded as Toss-ups. Three other races, in North Carolina, Nevada, and New Hampshire, are also expected to be closely contested. Four of the 6 contests that are expected to be very competitive are currently held by Democrats (Arizona, Georgia, Nevada, and New Hampshire) while the other 2 (North Carolina and Pennsylvania) are currently held by Republicans. These results suggest that Republicans have a slight edge in the 2022 Senate elections when it comes to potential seat swing based on the fundamentals in these races. However, Republicans are also defending seats in Ohio and Wisconsin, in which their predicted victory margin is just over 10 points, indicating that these seats could potentially be in play.

The outcomes of the 6-8 contests that will most likely determine control of the U.S. Senate in the next Congress will depend to a large extent on the individual candidates and their campaigns. Based on the fundamentals of state partisanship, incumbency, and the national political environment, Republicans have a good chance to pick up at least a seat and take back control of the upper chamber. Over the past decade, however, we have seen that Republicans have blown several opportunities to pick up Democratic seats by nominating candidates who were either ideologically extreme or weighed down by personal controversies. It remains to be seen whether any of the current crop of GOP candidates, many of whom are running as staunch Trump loyalists and some of whom have endorsed the Big Lie of the stolen 2020 election, will suffer a similar fate.