Skip to content
Home
/
The Political Profile of McCarthy’s Detractors

— This article is being published following the adjournment of the House on the afternoon of Wednesday, Jan. 4 after the body failed to elect a speaker on 6 roll call votes held Tuesday and Wednesday. The House was scheduled to return at 8 p.m. eastern on Wednesday.

— The 21 Republicans who did not vote for Kevin McCarthy on every roll call generally, but not exclusively, come from uncompetitive districts. They almost all appear to have at least some connection to the House Freedom Caucus, the group of hardline conservatives.

— Some recent choices by GOP electorates helped strengthen what would become this anti-McCarthy coalition.

— The longer this goes on, the more need there may be for a creative solution, like we saw in Pennsylvania’s state House speaker election on Tuesday.

The U.S. House of Representatives did something on Tuesday that it had not done in a century — go to a second ballot for speaker. Then it went to a third, without resolution. Votes 4, 5, and 6 happened on Wednesday, with almost exactly the same results as those held on Tuesday. No clear resolution is in sight as of this writing.

The vast majority of the Republican conference dutifully supported House Republican leader Kevin McCarthy (R, CA-20) on all of the votes, but 19 of the 222 Republicans voted against McCarthy each time. With the House at a 222-212 Republican majority — there is a single vacant Democratic seat, VA-4 — McCarthy needs 218 votes to win, assuming that everyone votes and votes for a speaker candidate by name (as opposed to voting “present”). A 20th Republican defected on the final vote held on Tuesday, Rep. Byron Donalds (R, FL-19). The only change on Wednesday was that Rep. Victoria Spartz (R, IN-5) voted “present” on votes 4, 5, and 6. That reduced the winning threshold from 218, to 217, but it also removed a vote from the McCarthy column. Very subtly, the McCarthy position was weakening — he started with 203 votes on the first 2 votes, fell to 202 on the third, and then 201 on the fourth, fifth, and sixth. It may be worth noting that McCarthy received more votes in 2021 (209), when Republicans were in the minority, than what he got on any of the votes so far.

The anti-McCarthy forces do not really have a clear alternative. The non-McCarthy votes were splintered on the first roll call. They then went to Rep. Jim Jordan (R, OH-4), who himself backs McCarthy, on votes 2 and 3. The insurgents then backed Donalds, the Tuesday vote-switcher, on votes 4, 5, and 6.

The entire Democratic caucus, with 212 votes, backed House Democratic leader Hakeem Jeffries (D, NY-8) on all 6 votes. Though much of the attention was on the Republican side, the Democratic unity was also notable: in each post-2010 vote, former Speaker Nancy Pelosi (D, CA-11) always had at least a few detractors.

How this gets resolved remains a mystery, but while we wait, we thought we’d take a closer look at the 21 Republicans who did not back McCarthy on all of the votes.

Table 1 lists them alphabetically — just like the roll call to which our eyeballs have been glued over the past couple of days — and notes when they were first elected, Donald Trump’s margin in their districts in the 2020 presidential election, and their own electoral performance in 2022.

Table 1: Electoral profile of Republicans who did not support McCarthy on all votes 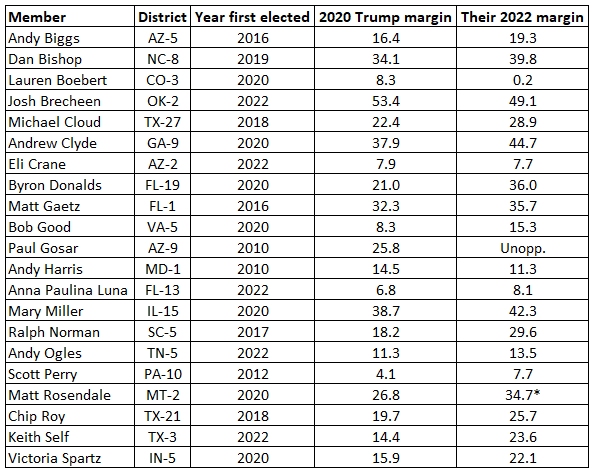 Notes: All voted for someone other than Kevin McCarthy on all 6 speaker votes conducted on Tuesday and Wednesday, with the exception of Rep. Byron Donalds (R, FL-19), who supported McCarthy on the first 2 ballots but not on subsequent votes, and Rep. Victoria Spartz (R, IN-5), who backed McCarthy on the first 3 ballots but voted present on subsequent votes. *The “their 2022 margin” column shows how much these Republicans won by in November 2022 over the person who finished in second place in their districts. In all but one instance, the second-place finisher was a Democrat; Rep. Matt Rosendale’s (R, MT-2) nearest rival in a 3-way race was an independent.

Nearly all of those who did not support McCarthy on every roll call are either members of the House Freedom Caucus, a group of hardline Republicans, or are politically adjacent to the Freedom Caucus. The House Freedom Fund, which is associated with the Freedom Caucus, supported some of the new members-elect who voted against McCarthy. The exact membership of the Freedom Caucus is a little hazy, as the group does not have an official public roster, but in going through these individuals, we found Freedom Caucus membership or connections for almost all of them. Spartz appears to be the single exception, although she has been supported by the Club for Growth, an outside conservative group that has often served as an anti-establishment force within the GOP political universe.

Many are newer to the House, and some of the more veteran members were part of previous protests against McCarthy. For instance, Reps. Andy Biggs (R, AZ-5), Paul Gosar (R, AZ-9), and Scott Perry (R, PA-10) backed Jordan for speaker as a protest vote in the 2019 speaker election won by Pelosi. They are among the 21 non-McCarthy voters now.

All of those who did not consistently vote for McCarthy were elected to districts that voted for Donald Trump for president in 2020, as well, although Trump’s performance in these districts varied widely, and a handful of them are on the fringe of the competitive House battlefield.

Rep. Lauren Boebert (R, CO-3), who has quickly become one of the biggest rabble-rousers in the House, only very narrowly won reelection in 2022 in her Trump +8 district that covers much of western Colorado. She really sticks out as the biggest 2022 electoral underperformer on this list. Joe Biden, or whoever the Democratic nominee is, may not carry her district in 2024 — it usually has a mild but stubborn Republican lean — but Democrats would like to give Boebert another tough race after her close call last year.

The others who won districts that Trump only carried by single digits are House Freedom Caucus Chairman Perry, who represents a Republican-leaning but arguably blue-trending Harrisburg-based district and has had competitive elections in recent years, particularly in 2018; Rep.-elect[^] Anna Paulina Luna (R, FL-13), who won by 8 points in a gerrymandered, more Republican version of the seat that former Rep. Charlie Crist (D) left behind to run what became an uncompetitive challenge to Gov. Ron DeSantis (R-FL) last year; Rep.-elect Eli Crane (R, AZ-2), who defeated former Rep. Tom O’Halleran (D) last year after Arizona’s independent redistricting commission made his sprawling northern Arizona district markedly more Republican; and Bob Good (R, VA-5), whose district includes Charlottesville and the University of Virginia — but also much of the redder Southside region — won a competitive election in 2020 before winning more easily in 2022.

Many of these other Republicans are in extremely red districts that are uncompetitive in general elections.

There are a number of choices made by GOP voters in this group of districts in recent years that have now made McCarthy’s life harder. What follows is not meant to be an exhaustive list of all the changes in all of these districts. But note the political trajectory in these handful we mention, where harder-line Republicans won out over other Republicans who profile less as troublemakers in a speaker vote:

— Good unseated now-former Rep. Denver Riggleman (R) in a 2020 convention. Riggleman has since left the Republican Party. Though Riggleman was a member of the Freedom Caucus during his time in Congress, he was not as ideological and socially conservative as his successor has been.

— Rep. Mary Miller (R, IL-15) defeated now-former Rep. Rodney Davis (R, IL-13) in a member vs. member primary last year. Davis is a mainstream Republican who was friendly with leadership; Miller is much more of a renegade.

— Boebert ran to the right of former Rep. Scott Tipton (R) in a shocking primary upset in 2020.

— Rep.-elect Andy Ogles (R, TN-5), who last year won a gerrymandered version of a seat that was previously much more Democratic and centered on Nashville, defeated, among others, former state House Speaker Beth Harwell (R), who we suspect would have been friendlier to House leadership.

— Rep.-elect Keith Self (R, TX-3) appeared headed to a primary runoff with now-former Rep. Van Taylor (R) last year, but Taylor bowed out immediately after the first round of voting, admitting to infidelity. Taylor, who tried to position himself closer to the center in a somewhat competitive 2020 general election, got 49% in the first round, almost enough to avoid the runoff. Republican mapmakers shored up this northern Dallas-area suburban/exurban seat in redistricting.

While the votes are not directly comparable to this one, Riggleman, Davis, Tipton, and Taylor all voted for McCarthy in the 2019 speaker vote (it’s fair to note that some of those who are not backing McCarthy now nonetheless backed McCarthy in that previous vote). And McCarthy would probably still be in trouble even if some of these districts had made different choices in recent years. But we thought it was worth pointing out how the changing composition of the Republican conference’s membership helped bring us to this point, where a GOP House leader has thus far proven unable to unify his conference in a speaker vote.

So the House’s business of choosing a speaker is unfinished as of this writing (following House adjournment on Wednesday afternoon). The longer this drags on, the more potential there may be for a creative solution.

We saw a couple such instances in the states yesterday.

In Ohio, Democrats — deep in the minority — ended up helping deny the state’s House GOP from picking its preferred candidate for speaker (Democrats and some Republicans backed a different Republican instead).

More interestingly, Pennsylvania Democrats and some Republicans came together yesterday to elect a Democrat (who says he will govern as an independent) as speaker in the narrowly-divided chamber. Democrats won a 102-101 majority in November, but 3 vacancies in Democratic-won districts gave Republicans a nominal 101-99 edge to start the session.

The likeliest outcome here is that the Republicans eventually figure this out and elect a speaker with just Republican votes. But we must reiterate that we are in essentially uncharted history here, at least in modern times.

[^]Because members have not been sworn in yet, which happens after a speaker is chosen, technically everyone elected to the House is a “Rep.-elect” as opposed to a “Rep.” right now. For clarity’s sake, we are referring to members who were elected prior to November 2022 as “Rep.” and members elected in November as “Rep.-elect.” But we wanted to note this distinction. It is a wild time. If you’re curious about the state of the House right now, and some of these distinctions in this limbo, speakerless period, we recommend following congressional procedure expert Matt Glassman on Twitter.