The twin Seats-in-Trouble forecasting models of congressional elections predict the net two-party aggregate seat change for the Democratic Party in the House and Senate, respectively. These are essentially hybrid models combining the virtues of intensive district-by-district and state-by-state in-depth handicapping of congressional races with the value-added rigor of the careful construction of an aggregate index and the systematic statistical evaluation of its historical relationship to seat changes in past elections.

The models use the late-August competitiveness ratings of congressional races from the Cook Political Report. Based on an evaluation of the correspondence of these individual race ratings to their election outcomes in the past, indices of each party’s number of vulnerable seats were calculated. The aggregate difference between the parties was used as an index and then included in a regression analysis to estimate its relationship to actual net seat changes. The seats-in-trouble index might be regarded as an extension of Oppenheimer, Stimson, and Waterman’s exposure model (1986). Rather than the number of seats nominally in jeopardy, the seats-in-trouble index counts those seriously threatened.

Both models have proven quite accurate in real-time application. The House model has been used since the 2010 election (though simplified in 2014). It was quite accurate in predicting the 2010 Republican wave and off by only six seats in 2012 and three in 2014. First used in 2014, the Senate model’s forecast missed the 2014 Republican nine-seat gain by a single seat.

For Senate elections, the index is slightly more stringent. It is the net number of a party’s seats (Democrats minus Republicans) rated as toss-ups or worse. The indices use ratings available in late August of the election year.

Based on one Senate Democratic seat being rated as a toss-up or tipped toward the Republicans and eight Senate Republican seats being rated as toss-ups or tipped toward the Democrats — a net of seven more Republican than Democratic seats-in-trouble — the model predicts that Democrats will gain seven Senate seats. This would bring the number of Senate Democrats (including two Independents who caucus with Democrats) up to 53 seats, a majority. The forecast was made on Aug. 19, 2016. 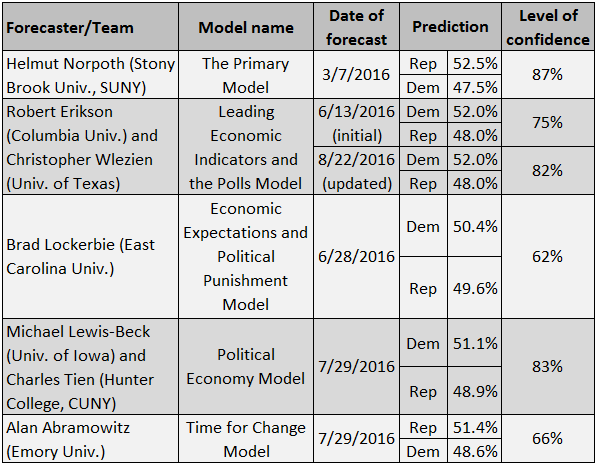 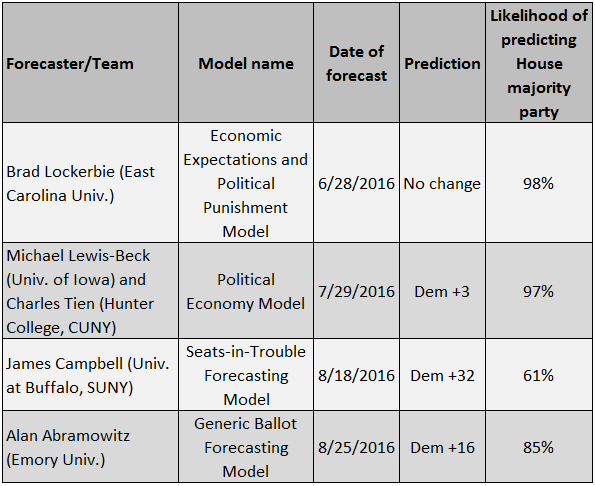