— Joe Biden is better positioned to win the presidency than Donald Trump, but it would be foolish to rule out another Trump upset.

The state of the presidential race

Everybody complains about the Electoral College but nobody ever does anything about it.

Before PolitiFact gets hold of this, let’s admit the statement is false in two respects. First, there are loads of plans floating out there to reform or abolish the Electoral College. We’ve dabbled at fixing it ourselves. But nothing’s going to happen this year — and that’s for sure.

Second, everybody is not complaining about the Electoral College. Republicans, for instance. In 2000 and 2016, the GOP has won the presidency while losing the national popular vote, and if Donald Trump wins a second term, he will likely travel this route again in November.

So like it or not, we as a nation are still going to College this fall. The popular vote is fun to talk about, but it is an artificial, powerless concept — as Al Gore and Hillary Clinton know all too well. And because most states are not two-party competitive anymore, we ought to spend the next two months focusing almost entirely on the dozen or so states that will pick the next president: Arizona, Florida, Georgia, Iowa, Michigan, Minnesota, Nevada, New Hampshire, North Carolina, Ohio, Pennsylvania, Texas, and Wisconsin. (These are the 13 states we rate as Toss-ups or as Leaning toward one party — additionally, there are competitive, single electoral votes in the ME-2 and NE-2 congressional districts.)

Everybody has a different theory about how the Donald Trump-Joe Biden contest will go, and thousands of people on Twitter fight about it all day long. One thing both sides agree on is that the race in the swing states will, on the whole, be closer than the national vote. In the polling averages, Joe Biden leads by 7-8%. Yet Biden’s lead in most of the swing states is smaller, and sometimes considerably smaller, than his national edge. Therefore, if the contest truly tightens in the next seven weeks, then Biden’s hold on some of the swing states will likely fall to a few points or less — and the makings of another Trump upset will emerge.

This is the scenario that, apologies to Jesse Jackson, keeps hope alive in the Trump camp and causes Democrats to lose sleep with nightmarish flashbacks to 2016.

By no means are the two years, this election and the one four years ago, riding on parallel tracks. Clinton was considerably more controversial than Biden is now. Trump has to defend his record in office; in ’16 he could just go after President Obama and his would-be successor, claiming “only I can fix it.” Plus, this time around, Trump has to defend his handling of the pandemic and make excuses for a bad economy. As the Hotline pointed out Tuesday, Trump was close to or ahead of Clinton in national polls at quite a few points in summer 2016, while Trump hasn’t led Biden in a reputable nonpartisan survey since early April.

It is still not clear precisely how racial justice issues will cut. Recent polls suggest Trump isn’t benefitting, but surveys often fail to pick up white racial resentment: Whites are sympathetic to the plight of Blacks on the record, less so when they mark their ballots in private.

For the record, we didn’t believe the overly rosy summer polls for Biden — who can forget Quinnipiac’s 13% margin for Biden in highly competitive Florida, for example (the pollster’s more recent survey has it at Biden +3). Trump has proven a hundred times that his base will stick with him through thick and thin, and so will other Republicans and GOP-leaning independents in this highly partisan and polarized era. Is Trump more than a few points shy of the 46% he received in 2016? If he is not, an effective get-out-the-vote effort targeting Trump supporters who weren’t registered or didn’t vote four years ago could do the trick. On the other hand, as we have argued for months, the lack of prominent third-party candidates this time means Trump will need more than the 46% he garnered before.

Anyway, everybody’s got a theory and this strange impersonal campaign makes handicapping tougher than usual, especially with so many surprises to come. Right now, you’d rather be Joe Biden, but only a very foolish person would rule out another Trump upset. It is never easy to defeat an incumbent president, even a deeply flawed one. Trump will pull out all the stops, and no doubt he has October surprises — very plural — planned right up until the end.

So let’s look at what Trump’s winning Electoral College map might look like — the one his campaign realistically believes can be achieved — and then do the same for Biden. Finally, we’ll tell you where we believe the map is today (subject to later revisions, inevitably).

Map 1: A good night for Trump 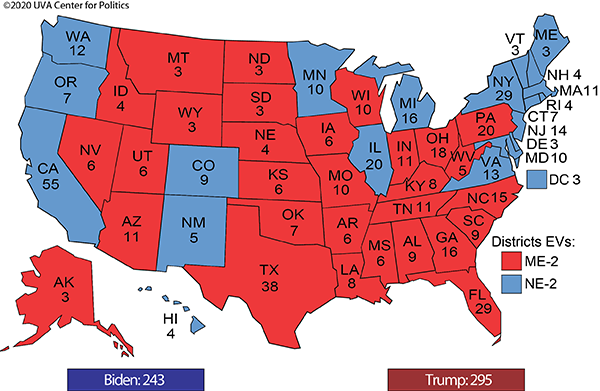 On a good night for Trump, he’d essentially pull off a repeat of his 2016 win, though we think it’s likely there would be at least a few states that change hands. Among the trio of Michigan, Pennsylvania, and Wisconsin, we’ve always regarded Michigan as the likeliest state to revert back to blue. Perhaps after watching the Clinton campaign fail to inspire the necessary turnout in urban areas in those states, the Biden operation does a better job turning out Black voters — but Trump’s rural strength ends up holding, and Democrats can ultimately only flip one of the three back. So in that case, Michigan would seem the most likely state to flip back blue, with Pennsylvania and Wisconsin narrowly sticking with Trump in this scenario.

In terms of expanding their map, the Trump campaign has often cited New Mexico as a Clinton state that they can gain this year. Still, the last Republican to carry New Mexico, George W. Bush in 2004, did so because he was competitive in the suburbs there. Bush took just over 47% in Bernalillo County — the state’s most populous county, which houses Albuquerque — while Trump couldn’t crack 35% there in 2016. There’s little reason to think voters there have warmed to him, and the (limited) polling from the state this year suggests that Trump isn’t in a position to close the eight percentage point deficit he sported in 2016.

Instead, we’d point to another small, western state as a better Clinton-to-Trump prospect: Nevada. Clinton carried the state by a more manageable 2.4% margin in 2016, and there are other structural factors at play that may benefit Republicans.

As 270toWin contributor Drew Savicki pointed out, the state’s light blue lean isn’t something you’d expect just by looking at some of its demographic points. Specifically, less than a quarter of its residents over 25 have a bachelor’s degree or higher — Democrats’ bread-and-butter coalition in the state consists of a diverse coalition of hospitality and culinary workers. By contrast, in both Minnesota and New Hampshire, two other Clinton states that Trump has mentioned targeting, about 35% of adults over 25 are college graduates. As we’ve frequently explained, Democrats have been making gains recently in places that have higher rates of four-year college attainment.

Something that’s helped to keep Nevada blue is the Democrats’ famous turnout operation; honed by former Senate Democratic leader Harry Reid (D-NV) over the last few decades, the “Reid machine” continues to be a powerful force in state politics. Still, there’s some evidence that the Reid machine may have some difficulty adapting this year, as the COVID-19 pandemic has necessitated new forms of campaigning — and voting.

If educational attainment is a reason we’d keep Minnesota and New Hampshire in the Biden column, it may also make sense to put Nebraska’s 2nd District there, as well. About 40% of residents there have a bachelor’s degree or higher, making it more educated than every actual state except for Massachusetts. Earlier this year, we noted that, despite its deep red lean at the statewide level, Nebraska hasn’t been immune to national trends: its two urban centers, Omaha and Lincoln, have gotten more Democratic while its vast rural swaths have drifted more Republican. Just like rural Maine’s redshift meant Trump could net an electoral vote there in 2016, NE-2’s movement in the other direction could stand to benefit Biden. This is the one rating change we are making this week: pushing NE-2 from Toss-up to Leans Democratic.

Back to the Trump winning scenario. On this map, Trump would see his Electoral College tally take somewhat of hit, dropping from 306 in 2016 to 295, but his two maps would be similar. In his 2004 reelection, George W. Bush saw a slight shuffling as well: he largely retained his 2000 coalition, but a few states changed hands. Running against a New Englander in John Kerry, New Hampshire flipped Democratic against Bush that year, but the president saw his electoral tally go up as he narrowly gained Iowa and New Mexico.

In his 2012 reelection, Obama became the only president since the Civil War to earn a second term while not adding a new state to his previous coalition, so Trump gaining Nevada — or any other Clinton state — would be right in line with history, if voters send him back to the White House.

Map 2: A good night for Biden 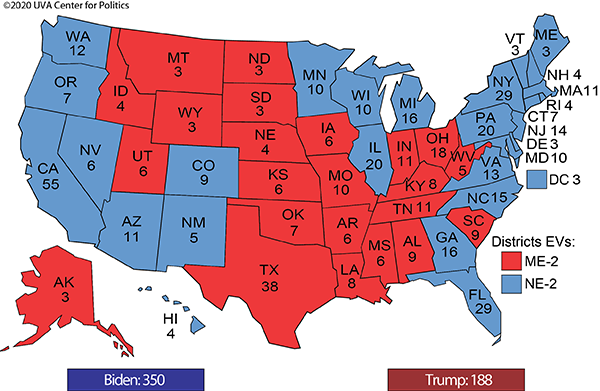 On a good night for Biden, his current polling situation would essentially manifest itself onto the election map. As of Wednesday morning, the RealClearPolitics average pegged Biden’s national lead at 7.3 percentage points, or the exact same margin Barack Obama earned in 2008. Speaking to the increased polarization that’s taken hold since then, that type of national lead would “only” be good for 350 electoral votes in this scenario, a bit less than Obama’s 365 a dozen years ago.

There’s been some debate this cycle whether a potential Biden victory would either reverse or accelerate political trends. In a reversal election, Biden’s strength would be similar to Obama’s in the Rust Belt, while in a situation where trends accelerate, the Democratic coalition would be marked by gains in the Sun Belt.

For this, we’ve tried to split the difference. In the Rust Belt, Biden’s lead is more than adequate to flip back Michigan, Pennsylvania, and Wisconsin, but Ohio and Iowa — states that gave Trump high single-digit margins in 2016 — may have just become too red. That ME-2 stays red in this scenario may also be a sign that Biden simply couldn’t match Obama’s strength with white working class voters. In the Sun Belt, Biden adds Georgia and Arizona to Obama’s 2008 map, but the biggest electoral prize in the region, Texas, stays Republican, though it’s easy to see Biden getting within a few points in the Lone Star State.

Though the Democrats are sometimes derided as a “coastal party,” looking longer term, this formula may represent a realistic ceiling for future nominees. If the party could continue to sweep the West Coast while winning every state on the Eastern Seaboard but South Carolina in the Electoral College, it would go a long way towards insulating Democratic nominees from further erosion in the Rust Belt.

Map 3 shows our current ratings. Again, this reflects today’s rating change in NE-2. We now have Biden right on the precipice of an Electoral College majority, with 269 electoral votes at least leaning his way. Although we have them as Toss-ups, we also think Biden is in a good position to carry Arizona and Wisconsin, as of today. That would put him at 290 electoral votes.

Florida and North Carolina are significantly closer. Of the Leans Republican states, Trump’s leads in Georgia, Iowa, Ohio, and Texas, as well as for the single ME-2 electoral vote, appear to be quite small.

So Trump has more work to do: He needs all of the Toss-ups just to get to a tie — which would be the craziest possible end to a crazy year, and where the Republicans likely would retain an advantage in a U.S. House of Representatives vote to determine the election. The Industrial North states, to us, remain the key to the election, with Nevada as an underappreciated GOP target as well. 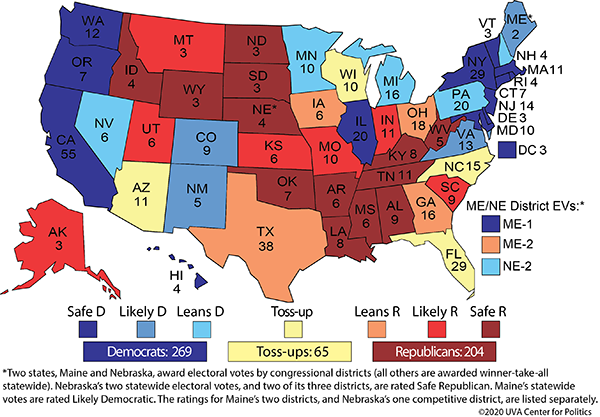