The Seats-in-Trouble model of party seat change in national congressional elections (both on-year and midterms) is a hybrid election forecasting model. It combines the insights and comprehensive assessments of expert election analysts examining in depth the conditions of individual House and Senate contests with a rigorous statistical analysis of historical aggregate data of partisan seat change.

From seats exposed to seats in trouble

The model essentially builds on the seat exposure idea explored by Bruce Oppenheimer, James Stimson, and Richard Waterman and similar notions examined by others who recognized the simple facts that you can’t lose what you don’t have and you are more likely to lose a lot if you have a lot to lose. Taking it to the next level, if you have a lot of vulnerable seats, chances are greater you’ll lose a lot of seats. The Seats-in-Trouble forecasting equation built from these observations was first used in the 2010 House elections. It has since been modified, tweaked, and extended to Senate elections. The accuracy of its forecasts in its various incarnations has been quite good until 2016, when substantial expected Democratic seat gains failed to materialize. As a result, the model’s standard of what constitutes a “seat in trouble” has now been tightened.

From individual ratings to an aggregate index

The raw material of seats-in-trouble equation is the pre-election competitiveness ratings of individual district or state races determined by The Cook Political Report since the mid-1980s.[1] Races are rated in one of eight categories: solid, likely, or leaning to the Democrats, a Democratic toss-up seat, and the same four levels of competitiveness on the Republican side. The seats-in-trouble index aggregates these individual district or state (in application to the Senate) ratings to a national measure. The revised index now counts a seat as being in trouble if it is rated as a toss-up or worse for the party currently holding the seat. The index is computed as the net difference in the number of seats in trouble for each party: Democratic seats in trouble minus Republican seats in trouble. A negative relationship is expected between the number of seats in trouble for a party and the number of seats actually gained by that party.

From an aggregate index to a statistical forecast 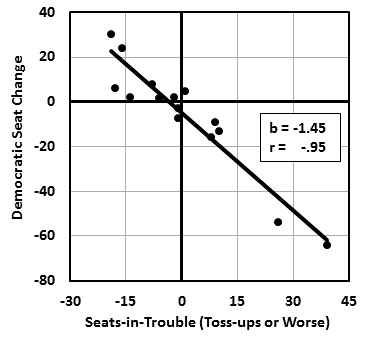 Note: Ratings around August were not made in 1986 and 1990 and those elections, therefore, are not included. 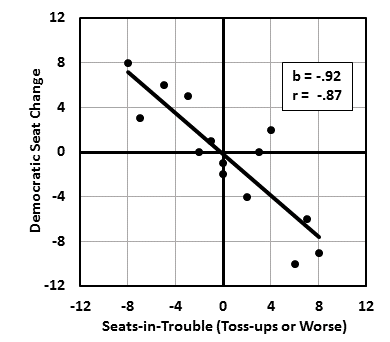 Note: Ratings around August were not made in 1990 and are, therefore, not included. 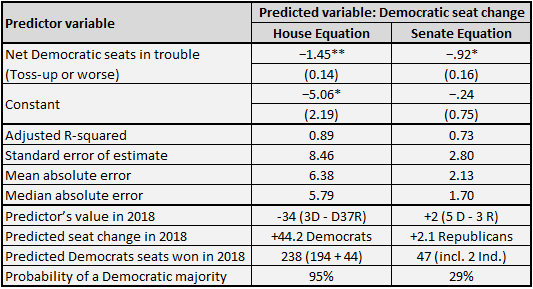 As Figure 1 and the table indicate, the index and actual seat changes are strongly related in House elections and the conversion of vulnerable seats to lost seats is greater than one in absolute value. If there are strong partisan short-term forces developing in an election, August ratings pick up their early signs, but not their full brunt as they build to November. In concrete terms, for every two “toss-up or worse” seats a party has in August compared to its opposition, it should expect to lose three seats in November.

The Cook Political Report in mid-August 2018 rated three House seats held by Democrats and 37 seats held by Republicans as toss-ups or worse. With a toss-up or worse difference of -34 for the Democrats, they are likely to gain about 44 seats. If this comes to fruition, the next House will have a Democratic majority with about 238 Democrats and 197 Republicans. Based on both in sample and out of sample errors, the odds are very high that the Democrats will emerge from the midterm with control of the House.

1. Thanks to Charlie Cook and his colleagues at The Cook Political Report for generously sharing their data.