— Nationalization is an increasingly important trend in American election outcomes. It’s hard to think of a more nationalizing issue than a presidential impeachment.

— Vulnerable members on both sides in the Senate will have a lot to consider if and when they have to cast a vote on convicting President Trump in a potential Senate impeachment trial.

— There are two Senate ratings changes this week, one benefiting each side. The most vulnerable senator, Sen. Doug Jones (D-AL), moves from Toss-up to Leans Republican, while Sen. Thom Tillis (R-NC) moves from Leans Republican to Toss-up. 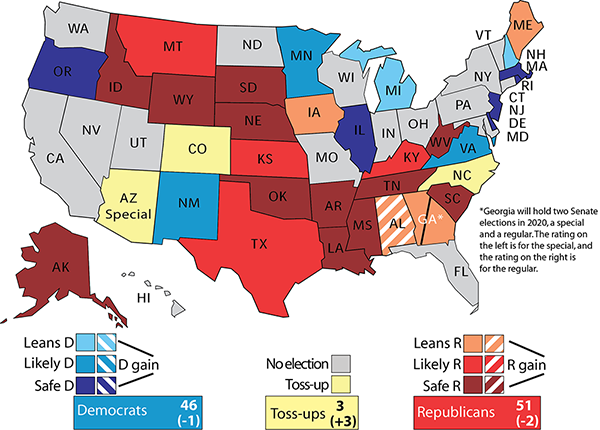 A major overall theme in American political life is the nationalization of politics. How people feel about the president is bleeding down the ballot to an extreme degree, to the point where congressional expert Gary Jacobson observed that the 2018 midterm was “the most sweeping national referendum on any administration at least since the Great Depression.” This helps explain the 2018 results, when Democrats swept the House but lost ground in the Senate because they held too many seats in states that had trended so far to the right in presidential races.

This trend showed up in 2016, too. Every state with a Senate race voted for the same party for Senate and for president for the first time in the history of Senate popular elections.

Nationalization seems very germane when assessing the Democrats’ drive for impeaching President Trump in the House and the possibility of an impeachment trial in the Senate.

In what is already a nationalized political time, impeachment may be the ultimate nationalizing event for members of the House and the Senate. An up-or-down vote on the continuation of the Trump presidency in advance of a presidential general election would be an unprecedented event in our lifetimes, and it would be occurring in a time when down-ballot politics is more defined by opinions of presidents than in any time in most, if not all, of our lifetimes as well.

It would make sense, therefore, that the impeachment vote would most potentially threaten members of Congress who occupy seats in enemy partisan territory.

Let’s take a look at the Senate, where the president would be tried if the House impeaches him.

Only a little more than a third of the Senate is up in 2020 (35 out of the 100 seats), so while certain members of the Senate not up for reelection next year might be unpredictable votes on impeachment, like Sens. Mitt Romney (R-UT) or Joe Manchin (D-WV), let’s just focus on the seats up next year. If there is a major political fallout over impeachment one way or the other, one would expect it to happen in this cycle as opposed to future ones, when this impeachment battle may be, politically speaking, ancient history (and it may be ancient history by November 2020, given how quickly the news cycle moves these days).

The senator on the ballot next year who most clearly represents the enemy territory we referred to above is Sen. Doug Jones (D-AL). He most clearly needs to attract a significant amount of crossover support next year, given that Trump won Alabama by 28 points in 2016. Jones can’t be looking forward to a possible impeachment vote, because he’d either let down his party base if he votes to acquit, or burn some already rickety bridges with Trump voters if he votes to convict.

In truth, our Toss-up rating in Alabama was being generous to Jones; it should be more like Leans Republican, particularly in a hyper-nationalized political environment. While it’s true Jones may again face Roy Moore, his disastrously bad GOP opponent from the December 2017 special election, in all likelihood another Republican should win the nomination, and even Moore vs. Jones would probably be a Toss-up, at best, for the Democrat. So we’re moving this race to Leans Republican, formalizing Jones as the most vulnerable incumbent of either party next year. The one possible exception might be Sen. Ed Markey (D-MA), who faces a stiff primary challenge from Rep. Joe Kennedy (D, MA-4), but that seat is safe for the Democrats either way.

Other Democrats up next year who may have trouble with a Senate vote represent Trump’s smallest win by margin, Sen. Gary Peters (D-MI), and his smallest loss, Sen. Jeanne Shaheen (D-NH). We have both rated as Leans Democratic, matching our Electoral College ratings in those states. Neither appears to be leading the Democratic drumbeat on impeachment.

Caution is also evident so far in the cases of Sens. Cory Gardner (R-CO) and Susan Collins (R-ME), who are the only two Republicans up for reelection next year from states Hillary Clinton won in 2016 — in fact, they are the only two Clinton-state Republican senators, period. But their states are not quite as blue as commonly believed. Colorado’s turn toward the Democrats is only recent, and Clinton carried it by five points — a respectable victory margin, for sure, but not an overwhelming one. Maine, meanwhile, only backed Clinton by three, very similar to her national margin of victory. Gardner and Collins are keeping their opinions close to their vests, and the nationalization trend could hurt both of them: Collins has lost some of her once-overwhelming crossover appeal as part of the fallout from the last great nationalizing moment in American politics, the confirmation battle over Supreme Court Justice Brett Kavanaugh last year. A vote to acquit Trump might nationalize Collins even further, although at the moment we’re keeping her race rated Leans Republican. Gardner, meanwhile, has generally positioned himself as pro-Trump following the president’s election (although he doesn’t yell it from the rooftops, understandably), and his state could very well get bluer in 2020, which puts him in real trouble. Gardner’s seat is the second-likeliest to flip parties next fall, behind only Jones, although we’re not moving him out of the Toss-up category yet.

Two other vulnerable Senate Republicans, Sens. Martha McSally (R-AZ) and Thom Tillis (R-NC), seem to be more clearly supportive of the president in the impeachment battle in the early going, and part of the reason may be that they both have at least somewhat serious primary challengers. Tillis, in particular, appears to be sweating the challenge from businessman Garland Tucker (R), as the incumbent has dropped $2 million on a pre-primary ad buy and is highlighting his backing from Trump. McSally and Tillis should both be OK in their primaries, but pressure from the right likely will keep them in line with their party on an impeachment vote, which could deprive them of crossover support in states that backed Trump in 2016 by about 3.5 points apiece but appear to be live targets for the eventual Democratic presidential nominee next year. McSally was already firmly in the Toss-up column, and we’re moving Tillis to that rating too. His personal favorability numbers are not good, and his primary challenge is pushing him to embrace Trump strongly, which may or may not be the right move in the long term. The Democratic field is uncertain, but the preferred pick for D.C. Democrats appears to be Cal Cunningham (D), a veteran and former one-term state senator who lost a primary for U.S. Senate in 2010. Cunningham does not have the profile of an obvious top-tier U.S. Senate recruit, although the last two winners of this seat, Tillis and former Sen. Kay Hagan (D), didn’t have elected experience beyond the state legislative level either.

One final point: While there are potentially vulnerable senators here we’ve left out, such as Sens. David Perdue (R-GA), Joni Ernst (R-IA), Tina Smith (D-MN), and John Cornyn (R-TX), most of the others are only hypothetically vulnerable in primaries. We have no clue when a Senate trial and vote on removing the president might occur, but the timing may be important depending on whether it comes before or after a state’s filing deadline. If there are senators on either side of the aisle who decide they want to buck their party on impeachment, it might be an easier decision if they could cast this vote after major party candidate filing deadlines have passed. Some of these deadlines — helpfully compiled by Daily Kos Elections and listed in Table 2 along with the Senate seats on the ballot next year — are coming up as early as November, although others don’t come until the middle of next year. In fact, only eight of the 34 states with Senate elections next year — Georgia has two — have filing deadlines that come before the end of January.

So if the impeachment wheels turn quickly, many members on the ballot next year may have to cast their votes prior to their states’ filing deadlines, which means that if there are political consequences from the decisions they make, that could lead to the emergence of new general election or primary challengers. 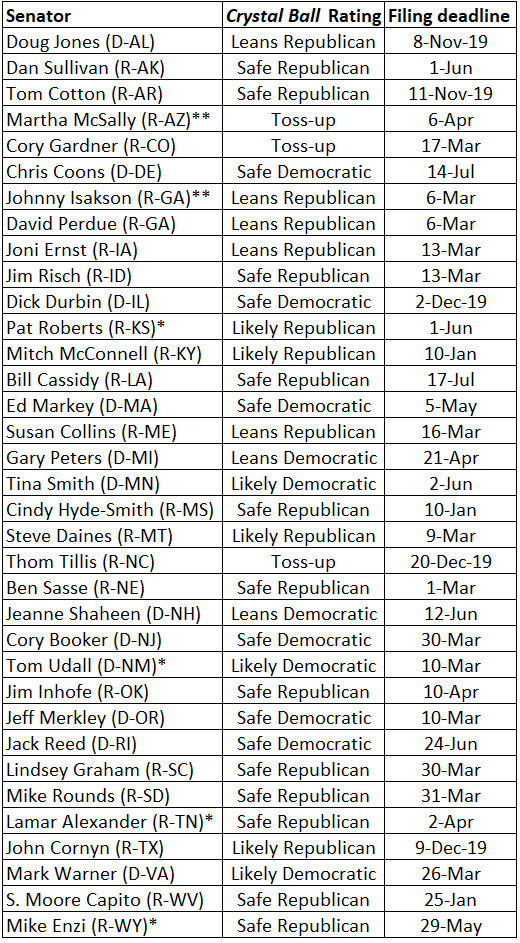 Notes: * indicates member is retiring at the end of next year. ** indicates a special election for 2020; Martha McSally (R-AZ) is running for reelection to the Senate after taking over for the late John McCain (R-AZ) last year, while Johnny Isakson (R-GA) is resigning at the end of this year. A previous version of this table had the incorrect date for Kentucky, which has been moved up to Jan. 10, 2020.

We would be lying if we said we had a great sense as to how the Democrats’ drive to impeach Trump will impact the elections next year. There are just too many variables and moving pieces to feel strongly about it. But the potential for the battle to harden partisan attitudes may have down-ballot effects for some members of Congress, as noted above.

But don’t be surprised if, for all the noise, the impeachment inquiry — and even a successful House vote for impeachment and subsequent Senate trial — does not lead to sharp changes in public attitudes. It is true from limited polling that, at the very least, Democrats are coalescing around impeachment after the revelation of the now-famous telephone readout between Trump and the Ukrainian president. What seems to be happening is that Democrats are taking their cues from party leadership, which has resisted calling for impeachment until now, and increasing their own support for impeachment as a result. There has been some movement in favor of impeachment among independents and Republicans, although one would have to cherry-pick data to argue that overall support for impeaching and removing the president is significantly more than mixed.

Meanwhile, the president’s approval rating — as it seems to do — has remained largely fixed where it’s been, in the low-to-mid 40s, with disapproval over 50%. Could the Ukraine bombshell and subsequent discoveries from the impeachment process cause it to dip over time? Sure.

But after years of observing the president’s durability in polls, thanks in large part to strong GOP support, it’s safer to expect continuity as opposed to change in the president’s standing.