Skip to content
Home
/
The Senate: Watch the Top of the Ticket

— Democrats need to net four seats to win an outright majority in the Senate and three seats to tie it. In the case of a Senate tie, the vice president casts the tie-breaking vote.

— Democrats’ magic number in the Senate realistically is three — if they net any more, all signs point to them winning the presidential election and, with it, the tie-breaking Senate vote.

For Senate Democrats, three is the magic number

In order for Democrats to win an outright majority in the Senate and overcome the current 53-47 Republican split, they need to net four seats. In the case of a Senate tie, however, the vice president casts the tie-breaking vote. Given the 2020 Electoral College and Senate maps, it is difficult to imagine a plausible scenario whereby Democrats net four Senate seats but do not win the presidency and the tiebreaking power in the Senate.

So three is the real magic number for Senate Democrats.

In a previous edition of the Crystal Ball, I argued that presidential candidates should run strong campaigns in states with competitive Senate and House elections in order to boost their party in down-ballot races. What that piece did not cover was just how tightly down-ballot candidates are strapped to their party’s presidential nominee.

Senate elections follow the top of the ticket and incumbency

Going back three decades to 1992, we have had seven presidential elections. A total of 240 Senate races have been run in these cycles. Two factors have been particularly influential in these Senate races: the presidential election and incumbency. Stick with me through this data (which you can access here), and then we will get to the fun part of gaming out the electoral map.

Three of these four elections had particularly remarkable conditions. In one (Alaska, 2008), the incumbent was convicted of corruption charges eight days before the election. In the second (Missouri, 2000), the winner died three weeks before the election. In the third (Georgia, 1992), neither candidate reached the requisite 50% threshold and a runoff took place three weeks after the general election. This leaves just one ordinary election out of 180 (South Dakota, 1996) where an incumbent senator lost when their party’s presidential nominee won their state.

So, what does this mean for November? 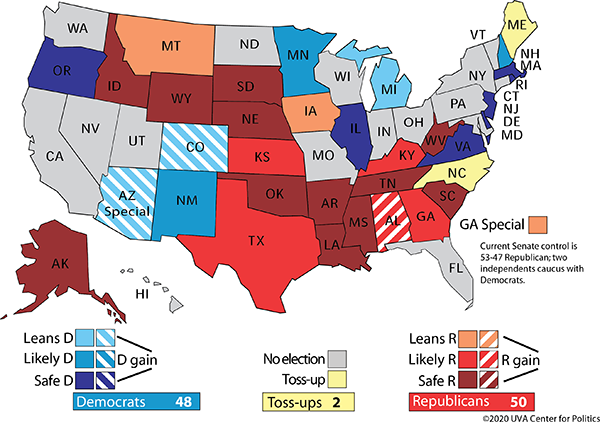 Republicans currently control 53 Senate seats to Democrats’ 47. Democrats have two plausible paths to net the four seats they need to control an outright majority of 51 Senate seats. First, they could hold onto their precarious seat in Alabama and win any four Republican-held seats that the Crystal Ball rates as Toss-up, Leans Democratic, or Leans Republican. Second, they could lose the Alabama race but win any five Republican-held seats.

I will generously assume Democrats hold onto Alabama and need to win four Republican seats to reach 51. Democrats’ best pickup opportunities are in Arizona and Colorado, two seats that are currently held by Republicans and which the Crystal Ball rates as Leans Democratic. Their next best prospects are in North Carolina and Maine, both of which are rated as Toss-ups. From here, Democrats will look to races that the Crystal Ball has rated Leans Republican: Georgia’s special election, along with Iowa and Montana.

The electoral history above shows that a near-essential prerequisite to Democrats flipping these Senate seats is winning the states on the presidential level. In order for Democrats to net four Senate seats, their presidential nominee will likely have to win at least four of the following states: Arizona, Colorado, Georgia, Iowa, Maine, Montana, and North Carolina.

Of these states, Colorado is likely the easiest for the Democratic presidential nominee to win. It has been trending blue on the presidential level since 2000 and Hillary Clinton carried the state by five percentage points. The next six states are more difficult to rank, though Maine, as the only other Clinton state, would seem like an enticing target. Taken together, though, any combination of four would point to a clear Democratic Electoral College victory.

Winning Maine — a state that is 95% white, 31% college educated, and which Clinton won by just 3% — would indicate that the Democratic nominee had not hemorrhaged northern white-working class voters crucial to winning the Rust Belt. Winning Arizona (and, to a greater degree), North Carolina, Georgia, Iowa, or especially Montana would point to a general popular vote shift in Democrats’ favor relative to 2016. That year, Trump won these five states by greater margins than he did the crucial Rust Belt states of Michigan, Wisconsin, and Pennsylvania.

If the Democratic nominee wins any four of the identified states — AZ, CO, GA, IA, ME, MT, NC — they should have won a clear Democratic victory in the Electoral College. For example, it is difficult to believe that the Democratic nominee could win Colorado, the white voters in Maine, and 2016’s more Republican states of Arizona and North Carolina without reaching 270 electoral votes. Similarly, if Democrats lose the white voters of Maine but win Colorado, Arizona, North Carolina, and Georgia (or Iowa), their Electoral College prospects look bright.

If Democrats win the Electoral College (and vice presidency), they will have won the tie-breaking vote in the Senate, meaning they only needed to win 50 Senate seats, not 51. Democrats’ magic number in the Senate is three — if they net any more, all signs point to them winning the presidential election and the tie-breaking Senate vote.

Exceptional races may upend historical precedent, but don’t count on it

Claims that historical precedent does not apply to our political era or the upcoming elections should be treated with skepticism. There are, however, conditions that toss unpredictability into upcoming Senate races.

Consider Georgia’s overlapping Senate elections. One of the state’s seats, held by Sen. David Perdue (R-GA), is up for its regular sexennial election. The other, however, was vacated when Sen. Johnny Isakson (R-GA) resigned at the end of 2019 due to health problems.

The state’s governor appointed Republican businesswoman Kelly Loeffler (R-GA) to the vacant seat. She is running in November’s all-party special election and has drawn a serious challenge from her right in Rep. Doug Collins (R, GA-9), a stalwart Trump ally. Several Democrats have filed for the race as well. If no candidate receives over 50% of the vote — a likely scenario with multiple candidates from both parties — then there will be a runoff election in January. This could lead to various unusual scenarios, including a runoff between two members of the same party.

Arizona’s Senate race will also have oddities of its own. The incumbent, Republican Martha McSally, lost the most recent Senate election there, in 2018. A couple of months after her November defeat, she was appointed and sworn in to fill the late Sen. John McCain’s (R-AZ) seat. After McCain died in August, former Sen. Jon Kyl (R-AZ) served as a caretaker before resigning after several months. McSally is running against a strong candidate in former astronaut Mark Kelly (D). Though a first-time candidate, Kelly is married to former Rep. Gabrielle Giffords (D, AZ-8) — Giffords survived a 2011 mass shooting, and is a beloved figure in the state. Kelly has consistently outraised and outpolled McSally, an impressive feat given McSally’s incumbent status.

Moving north to Montana, Gov. Steve Bullock’s (D-MT) recent decision to run for Senate shakes up that race. Bullock, despite launching a 2020 presidential bid that fell flat, is one of the nation’s most popular Democratic governors — an impressive feat in a state Donald Trump carried by 20% in 2016. Bullock joining the race pushed the Crystal Ball to shift the race from Likely Republican to Leans Republican. In his home state, Bullock’s electoral margins were 15 percentage points stronger than Barack Obama’s in 2012 and 24 percentage points better than Clinton’s in 2016.

Though running for Senate is a different ballgame, Bullock will likely outperform the Democratic presidential nominee in Montana. However, the history recounted above shows the daunting task ahead of Bullock: He is trying to beat an incumbent senator in a state that is very likely to vote for the presidential candidate from the incumbent senator’s party. A Bullock victory under such circumstances would not be without precedent in recent times, but it would be an oddity.

Finally, we are still seven months away from the November elections. There is plenty of time for surprises that could upend any of the competitive Senate races.

Still, it is extremely rare for incumbent senators to lose if their party’s presidential nominee carries their state. In this era of political unpredictability, the one certainty we have is partisanship and its companion, straight-ticket voting. Downballot Republicans will be strapped to Donald Trump, as Democrats will be to their nominee.

In 2016, 34 states held Senate elections — there were no Clinton states that elected Republican senators or Trump states that supported Democrats. This represented an abrupt break from 2012, when five Romney states sent Democrats to the Senate while Nevada supported Obama but voted to give then-Sen. Dean Heller (R-NV) a full term. It seems reasonable to expect that 2020 will look more like 2016 than 2012.

It would take an extreme departure from historical precedent for Democrats to net more than three Senate seats without also winning the presidency. Even with the volatility of contemporary politics, some things are predictable. For Senate Democrats, the magic number is three.