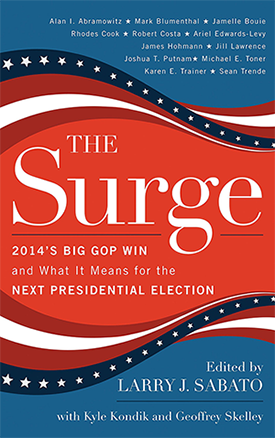 The Surge, the University of Virginia Center for Politics’ postmortem of the 2014 midterms and preview of the 2016 presidential election, is now available for pre–order.

Edited by Center for Politics Director Larry J. Sabato and Sabato’s Crystal Ball editors Kyle Kondik and Geoffrey Skelley and published by Rowman and Littlefield, The Surge: 2014’s Big GOP Win and What It Means for the Next Presidential Election brings together some of the nation’s top political journalists and analysts to explain why and how the Republicans took the Senate and where American politics stands as the country’s polarized political parties gear up for 2016.

The contributors and their chapters are:

The Surge will be released later this month and is available for pre–order.