If you’ve been following the political commentary in the national media recently, you’ve probably heard that the 2012 presidential election is likely to result in the largest vote for a third party candidate in many years, perhaps exceeding the 19% of the national popular vote won by Ross Perot in 1992. According to a number of prominent pundits and pollsters, including the Washington Post’s Ruth Marcus and Democracy Corps’ Stan Greenberg, Americans are fed up with Democrats and Republicans in Washington and are ready to vote for a centrist alternative.

In fact, there’s an organization that hopes to provide Americans with a centrist alternative to the two major party candidates in 2012. It’s called Americans Elect and it has already raised over $20 million (mostly from a few anonymous donors) and is well on its way to securing a place on the ballot in several key states for its presidential candidate — a candidate who is supposed to be chosen not by party bosses or primary voters but by millions of Americans on the Internet.

So far no prominent candidates have indicated an interest in seeking the Americans Elect nomination. Some political commentators have even suggested that the entire process could be hijacked by Internet-savvy supporters of a decidedly non-centrist candidate like Ron Paul.

But the absence of a high profile candidate is far from the only major obstacle that Americans Elect faces. Attracting media coverage, raising the hundreds of millions of dollars needed to wage a national campaign and securing a place on the ballot in all 50 states are perennial problems faced by third party candidates.

Of course there will be third party candidates on the ballot in 2012, just as there are in every presidential election. But it is unlikely that any of these candidates will approach the 19% of the vote that Ross Perot received in 1992, or even the 8% that he received in 1996.

There’s an important reason why third party candidates have fared poorly in recent presidential elections and why third party candidates are likely to fare poorly again in 2012: partisan polarization. The vast majority of American voters today, in fact well over 90%, identify with or lean toward one of the two major parties. And the vast majority of those identifiers and leaners strongly prefer their own party’s candidates and policies to those of the opposing party.

For the past 40 years, America’s two major parties have been moving apart, with Democrats moving to the left and Republicans moving to the right. According to some observers, the majority of voters have been left stranded in the middle, yearning for a centrist alternative. And the trends displayed in Chart 1 seem to support this conclusion.

Chart 1: Average positions of voters and perceptions of parties on liberal-conservative scale by decade 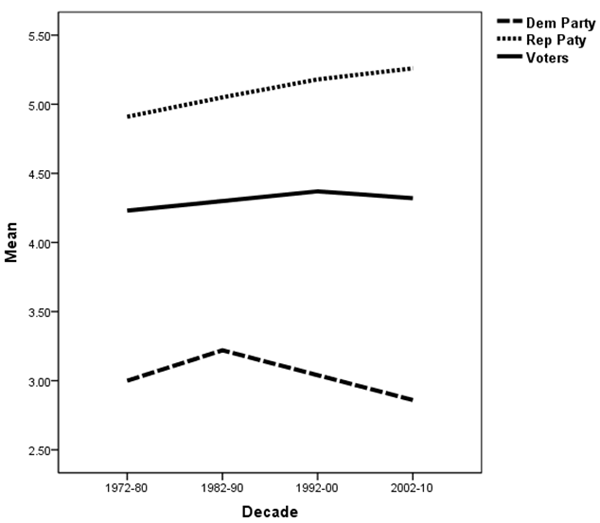 According to these data from surveys conducted by the American National Election Studies, the location of the average voter on a seven-point liberal-conservative scale has barely budged since the 1970s while the perceived location of the Republican Party has shifted to the right and the perceived location of the Democratic Party has shifted to the left. The result of these trends is what seems to be a growing gap between the average voter and both major parties: a gap that would appear to provide a large opening for a centrist third party candidate.

Chart 2: Average positions of voters and perceptions of parties on liberal-conservative scale by decade for Democratic and Republican identifiers and leaners 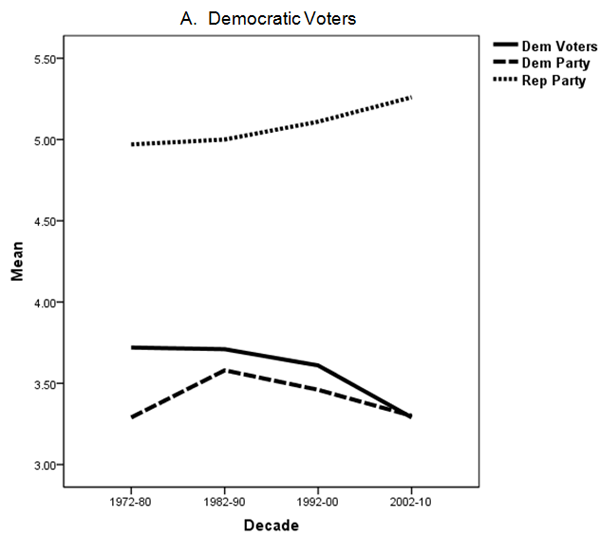 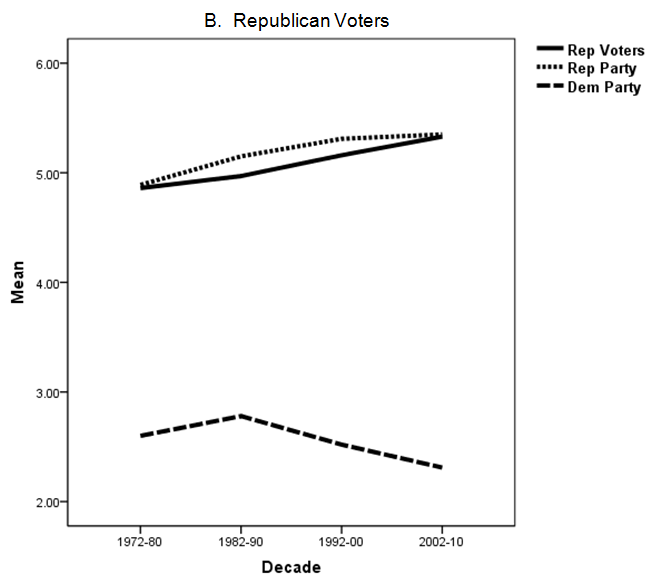 But the impression of a large and growing gap between the voters and both major parties is very misleading. As the data displayed in Chart 2 show, once we break the electorate down into Democrats and Republicans, with leaning independents included with the party they lean toward, the picture changes drastically.

There is one group of voters that might be tempted to vote for a centrist third party: pure independents. These voters, on average, place themselves right in the middle of the two major parties and rather far from either one. But pure independents typically make up less than 10% of the electorate, and they tend to be less interested in politics and less attentive to political campaigns than voters who identify with a political party. There are simply not enough of them and they are too hard to mobilize to have a major impact on the outcome of a presidential election.