— Female candidates enjoyed a cash advantage over male candidates, with an especially large gap among Democrats in open competitive seats.

–There has been no observable advantage in the amount of cash spent between newer incumbents and those who have been reelected multiple times.

Running a political campaign, even for a House seat, can take a lot of money. This is especially true if the district happens to be competitive, and this cycle saw extremely high spending and engaged donors, especially on the Democratic side. Thanks to data compiled from the Federal Election Commission and OpenSecrets.org, we can now explore the database of all candidate spending and look at the baseline and how it’s changed from previous cycles.

Figure 1 shows how much House campaigns spent on their races for all the cycles this decade (2012-2018). The number plotted on the y-axis is the total spent by a single candidate in a race during all of the campaign, not the cost of the race as a whole. This excludes third-party spending or any money coming from outside groups that went into a race. This is then broken out by the final margin in that race, so that the spending looks at competitiveness. The chart has a few outliers, but is cut off at $8 million to visualize it better. 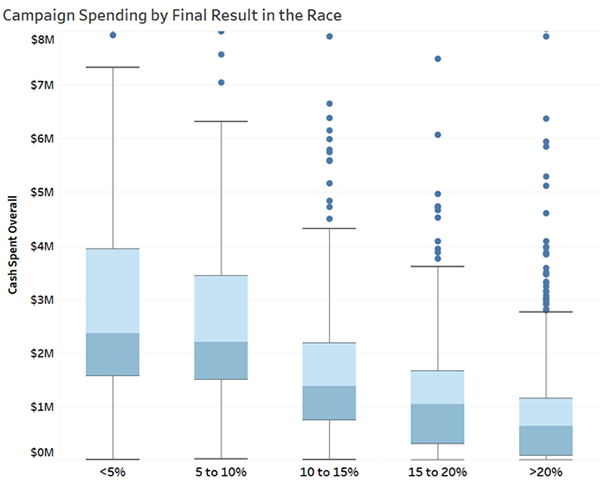 Figure 1 shows that a competitive House race within single digits is likely to set a candidate back over $2 million, while it falls within the normal interquartile range of the middle 50% of races to spend millions more than that. After that, the amount put into running a campaign continues to decrease, with more of the higher spending being during a primary. This is still the commitment it takes and provides a good baseline for the health of a campaign along the way.

2018 was an aberration, and as financial reporting came in, Republicans began to worry more and more about the Democratic cash advantage. For the first time, we have a compiled dataset of all campaign spending to examine just how abnormal the cash spent in 2018 was compared to other cycles this decade. Figure 2 below plots out the last four cycles and the median cash spent in each race by category for competitive races, or races that were ultimately decided by less than 10 percentage points. The categories are, from left to right: Republican and Democratic incumbents; the Republican and Democratic challengers to those incumbents; and Republicans and then Democrats running in open seats. 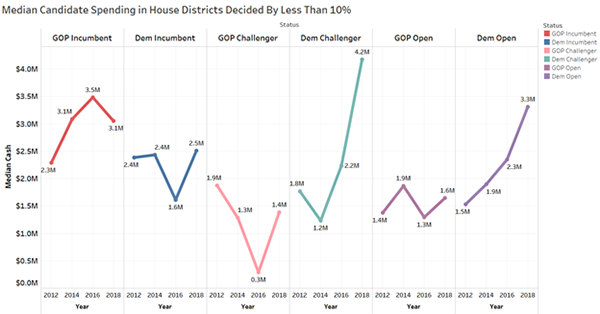 Note: Click on the image to see a larger, easier-to-read version.

Here you can see 2018 is a huge outlier in two main categories: Democratic challengers and Democratic open seats. Both sides’ incumbents spent about the same as past years with not much deviation. You will also notice that, generally speaking, GOP non-incumbents didn’t spend as much as their Dem counterparts; however, their incumbents spent more per campaign despite there being far more examples. A lot of this gap is accounted for by the Republican reliance on large donors as opposed to small donors. As they’ve held the majority, those large donors came relatively easy, but with Republicans now in the minority, their influence wanes and industry money pivots to the new party in power. One of the big challenges in retaking seats in 2020 for Republicans will be accounting for a $1.5+ million gap in their typical numbers for challenger campaigns. The other major trend is the jump in Democratic money spent, with challengers going from a median of $2.2 million per campaign to $4.2 million in 2018, or nearly double. Democratic open seats also saw an increase up to $3.3 million as the median campaign, up from $2.3 million in 2016. The median Democratic candidate in these competitive open seats actually spent more money than the median Republican incumbent in similarly competitive seats, a huge advantage.

When looking at where that money came from, I decided to look at the 2018 spending split by gender, shown below in Figure 3. The labels on each have first the median amount of cash spent and then the number of instances for each category. The Democratic incumbent/GOP challenger category was excluded because there were not enough data points. 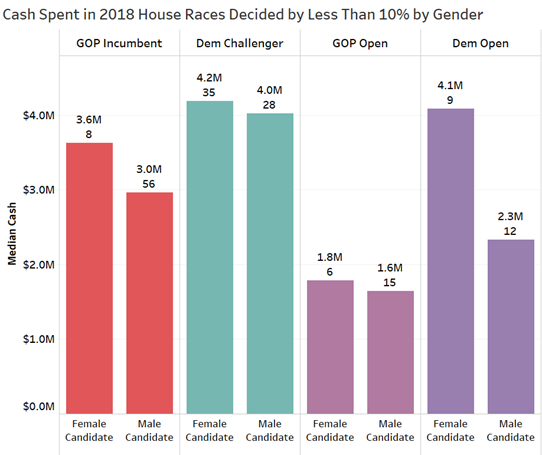 First, even if the difference was only a couple hundred thousand dollars, female candidates from both parties spent more than their male counterparts. Both spent in record numbers where Democrats were challenging incumbents, but open seats tell another story. Male Democratic candidates in competitive races spent a median of $2.3 million, identical to the 2016 median. Women, on the other hand, spent a median of $4.1 million, far ahead of the previous cycle’s totals. It stands to reason that being a woman may have held an advantage in cash spent, and possibly in election performance as well because of it.

An analysis from the Center for Public Integrity written by Carrie Levine and Sarah Kleiner looked at how women made up a larger share of donors to Democratic donation aggregate site ActBlue, and women donors gave more to women candidates. This is mostly lopsided as women continue to make up a larger and larger share of Democratic donations, while the Republican side stays flat, and a gender gap emerges among frequent donors giving $200 or more.

The last feature to explore is a variable that I have previously expressed skepticism towards: the value of “entrenchment.” This is the belief that incumbents that have been around longer have an organic advantage over those who are new, an advantage that, if it exists, might manifest itself in fundraising. In Figure 4, I try to see if this holds with regards to the ability to spend money and accumulate a bigger warchest. On the x-axis, I have taken the number of terms an incumbent has served. There were not enough data points by year after five terms but considering that this covers close to a decade, I hope for it to be sufficient. On the y-axis is the amount of cash spent by that campaign in total, and this includes all races that ended up being decided by less than 10 points. Because 2018 was such an outlier, I broke out the data by year, so everything will be relatively lined up. What we would expect to see if an entrenchment advantage existed is a positive line for at least most of the years, signifying that the longer an incumbent had been in office, the more they could spend in a competitive race. 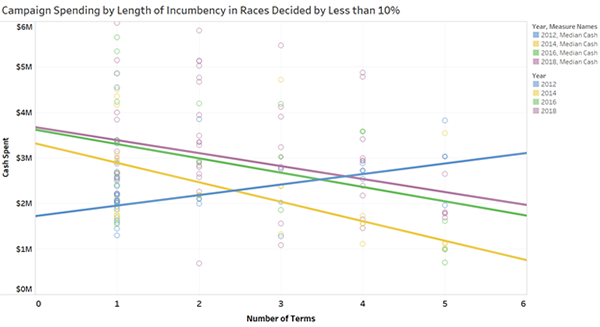 Note: Click on the image to see a larger, easier-to-read version.

This is however not the case, as the trend for every year but 2012 has a negative slope, though only 2014 in yellow has a p-value under .05 (p=.014) that says that there is a real relationship. From here we can see that the length of incumbency seems to have no bearing on how much campaign cash they can spend.

What we saw in 2018 was an explosion in House campaign spending in 2018, especially for some Democratic women in key races that likely affected the outcomes of some House seats. Both parties will need to adjust for future cycles. Democrats may not be able to replicate the historically high numbers in their campaigns, while Republican non-incumbents typically struggle to raise the same amount, and GOP incumbents are now in the minority.