Elections for the thousands of state legislative seats that determine partisan control of states are typically provincial battles drawing relatively little attention from national media. These legislative elections are often called hidden elections. However, the spotlight this November will spill over to these down-ballot races because redistricting is around the corner, so the results in hundreds of races in the hinterlands could have long term implications for partisan control of Washington. In all but six states that use some form of commission, the initial authority for redrawing House districts belongs to the state legislature. Even though the election is still three months away, an eternity in politics, historic trends and political signs point to a Republican year in state legislative races this fall and that could spell trouble for Democrats in Washington for years to come.

If Republicans fare well in legislative elections as it appears they might, combined with likely GOP gains in many of the 37 gubernatorial races this fall, they will have a decided advantage when the redrawing of congressional districts starts early next year. The 2011 redistricting could be the first time since the era of modern redistricting began in the 1980s, following the 1960s landmark Supreme Court decisions on redistricting and the evolution of the process in the 1970s, that Republicans have the redistricting edge in the states, and it could be substantial. If November 2nd is a big Republican wave election, it could give the GOP sole redistricting authority in the drawing of more than 160 U.S. House districts—nearly six times more than their Democratic counterparts. Under this scenario, the bulk of the seats redrawn in the 2011 redistricting, about 200, will be in states with divided partisan control. The stakes for this November’s legislative elections could not be higher. It’s shaping up to be a year of historic volatility in state legislative elections.

Democrats currently have the upper hand in legislatures and are at that their strongest position since the wipeout they incurred in 1994. They control both chambers of the legislature in 27 states including near total control of the northeast. The Pennsylvania Senate is the only state legislative body north of Virginia and east of Ohio that is held by Republicans. Republicans control the legislative branch of government in 14 states representing their lowest point since before the 1994 election that saw Republicans surge to nearly even on the legislative scorecard. In eight states, partisan control is divided with neither party having the majority of seats in both legislative chambers. 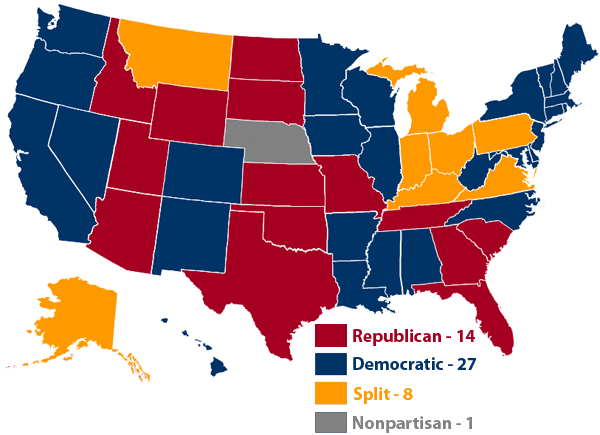 In terms of legislative chambers, Democrats hold the majority in 60, Republicans in 36, and two, the Alaska Senate and Montana House, are tied. After netting just under 100 seats in the 2008 election cycle, Democrats now hold 55.4 percent of the partisan held seats in state legislatures compared to the 44.4 percent with Republican incumbents. Third party legislators and independents continue to hold only a small fraction of all seats. This is the Democratic high water mark since the aforementioned 1994 election when Republicans added more than 500 legislators to their ranks. As of now, there are 802 more Democrats serving in legislatures than Republicans.

To say that Democrats have their work cut out for them in 2010 would be an understatement. Several historic trends point to this being a GOP year. Since 1900, there have been 27 elections held in the presidential mid-term year. In all but two of those mid-term elections, the party in the White House lost seats in state legislatures. The only exceptions were in 1934 and 2002. In 1934 during one of the lowest points of the great depression, Democrats campaigned on Franklin Roosevelt’s New Deal and gained over 1100 legislative seats nationwide in FDR’s first mid-term election. In 2002, Republicans rode a groundswell of support for President George W. Bush in the wake of the September 11th attacks to pick up 177 seats. However, in the other 25 mid-term elections, the party of the president lost an average 495 legislative seats. Mid-term losses have been mitigated in recent decades since modern redistricting took hold, but the trend is still very consistent. This trend is not good news for Democratic legislative candidates running for the first time since 2000 with a Democrat in the White House.

Fate of President’s Party in Legislatures in Midterm Elections 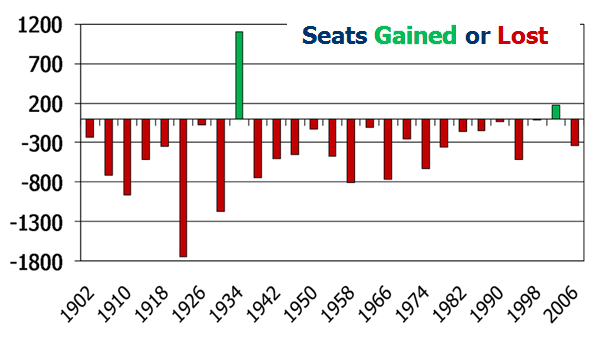 Another trend that works in favor of the GOP is the three-in-a-row syndrome. Democrats have increased their legislative numbers in each of the past three election cycles with their biggest surge being in 2006 when they added 322 seats. Neither party has netted seats in four consecutive elections since Democrats capped off a string of winning four elections in a row in 1936.

Add to this polls pointing to an anti-incumbent year, and it’s clear that Democrats face the proverbial uphill climb especially since they will have far more incumbents running for legislatures than the Republicans. One other minor trend that might bode well for Republicans is the handful of special legislative elections held thus far in 2010. Since January 1st, there have been 37 special elections to fill state legislative vacancies. In six of those races, the party control of the seat switched with Republicans winning four and Democrats winning two. In 2006, Democrats managed to swipe 11 seats in special elections compared to two won by Republicans, and that edge in specials turned out to be a harbinger of big Democratic gains in November of that year.

On average, 12 legislative chambers switch party control in every two-year election cycle since 1900. It is likely that 2010 will lead to at least that much upheaval. One way to make a first cut at competitive chambers is to identify upper chambers where a gain of three seats by the current minority party would lead to a party control switch and lower chambers where a pick-up of five seats would alter control. That leads to a preliminary list of 27 battleground chambers (see table below) headed into the 2010 elections. Fourteen of the chambers that make the initial competitive list are currently held by Democrats, and eleven by Republicans. As stated above, the Alaska Senate and Montana House are tied. Another four or five chambers fall just outside the “competitive” range and could be in play if there is a strong tide in one direction.

Several big-state legislative bodies with major redistricting implications top the list of states-to-watch including the New York Senate (32 D – 29 R – 1 vacant), the Ohio House (53 D – 46 R), and the Pennsylvania House (104 D – 98 R – 1 vacant). All three of those chambers shifted to the Democrats in the 2008 Democratic surge after years of GOP control. Other key chambers to watch include the Alabama Senate (20 D – 15 R), the Indiana House (52 D – 48 R), the Texas House (73D – 77 R) and both the Wisconsin Assembly (52 D – 46 R – 1 Ind.) and Senate (18 D – 15 R). The Alabama Senate has been in the hands of Democrats since 1872. The Indiana House has switched hands as often as any other lower chamber—19 times since 1900. Democrats face an uphill battle to win the Texas House, but it may be their only chance to derail Republicans from complete control of the redistricting process in the state projected to gain three or four new U.S. House seats. The Wisconsin Assembly has only been Democratic for two years and the Senate for four years. The table below shows the preliminary list of competitive chambers for 2010. 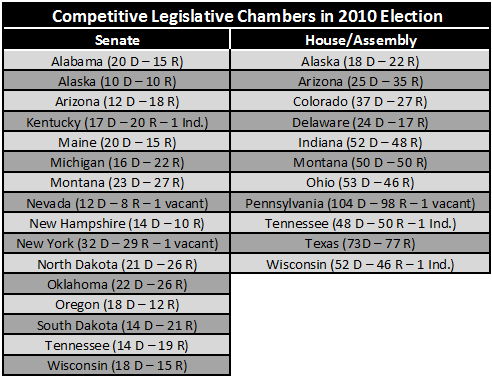 As the election nears, the list of truly competitive chambers will be pared down based on primary results, fundraising, incumbent retirements, and the general political climate in each state. It’s clear that Democrats are more likely to be playing defense and trying to hold gains made over the past six years in what is almost certainly going to be a Republican year as the political pendulum reaches its outer point and begins the path back towards the GOP. If it is a “wave” election as some are predicting, chambers such as the Colorado Senate, Iowa House, Michigan House and the North Carolina Senate will also be in play. A table of the current partisan composition for all legislatures is available on the National Conference of State Legislatures website.

It’s Not All About Redistricting

Legislative races matter and not just because of redistricting. In any given year, state legislators consider over 110,000 bills covering everything from energy policy to health care to education to economic development. Legislatures enact over 20,000 new laws every year. In addition, legislatures approve budgets that account for the spending of about $1.5 trillion in taxpayer money annually and they do that by making tough decisions and balancing state budgets. Of course, some bills are controversial; remember that the states are the “laboratories for democracy” after all. And a tiny, tiny fraction of bills are downright silly. And even though the media tends to focus on the controversial and silly bills, there’s a tremendous amount of good substantive work that goes on in legislatures. The party in the driver’s seat makes a big difference when it comes to the policy agenda from state to state.