When a presidential campaign wants to signal that it is turning from the nomination clash to the general election, “sources close to the campaign” make it known the Veep search has begun. Right on schedule, as Donald Trump has become the Republican nominee-presumptive and Hillary Clinton has maintained an unassailable mathematical lead on the Democratic side, both campaigns have reportedly hinted that they have started to vet possible vice presidential options.

How serious the vetting is at this moment cannot be known, but it would be irresponsible to let the process languish. Thorough investigation of all candidates for vice president is now a given. No presidential nominee ever wants to find him or herself in George McGovern’s shoes. In the summer of 1972 the Democratic candidate for the White House hurriedly chose Sen. Thomas Eagleton (D-MO) as his running mate, only to discover days later that Eagleton had been hospitalized several times for serious depressions and had undergone electric shock treatments.

McGovern had barely checked Eagleton’s background and Eagleton didn’t volunteer the damaging information. After declaring he’d back Eagleton “1000 percent” despite the revelations, McGovern eased Eagleton off the ticket after a mere 18 days. McGovern replaced him with Sargent Shriver, John F. Kennedy’s brother-in-law and former director of the Peace Corps, but severe damage was done. Time magazine made fun of McGovern’s hapless VP search, showing Shriver’s face pasted on the body of someone standing next to the nominee (see the image below). Democrats were never going to win in 1972, but they might have avoided a 49-state wipeout if the campaign had gone better. 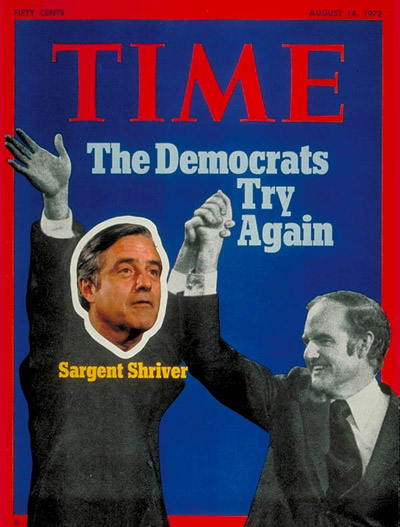 Richard Nixon’s running mate, Vice President Spiro T. Agnew, was deeply flawed as well. In 1968, Nixon had also undertaken no real background checks on the little-known Agnew, then in his first term as governor of Maryland. (Agnew was picked in part because he was unknown; many other prominent possibilities had to be eliminated for risk of alienating various factions of the GOP.) During the Watergate scandal, a separate but concurrent investigation found that Agnew had regularly taken cash bribes from contractors during his service in Maryland and even as vice president. Agnew was forced to resign in October 1973, pled nolo contendere to a charge of tax evasion, and lost the White House, which he would have inherited in August 1974 with Nixon’s resignation. It is worth noting that had Agnew’s corruption been revealed in the fall of 1968, Nixon would arguably have lost the close presidential election to Vice President Hubert Humphrey.

There have been other poor Veep choices since 1968 and 1972, but the bipartisan combination of Agnew and Eagleton has been enough to prove to most ensuing White House nominees that careful thought about, and proctoscopic investigation of, VP possibilities are essential. It’s a reasonable assumption that both Clinton and Trump understand that — though some Republicans fear that Trump will make a gut choice without sufficient examination.

Remember, though, that avoidance of disaster is just the minimal objective. The other, more elevating goal is the selection of a VP nominee who can actually help the party win the election. Without plowing too much old ground, it is remarkable how few VP picks have done that since John F. Kennedy’s smart choice of Lyndon Johnson in 1960 (which gave Kennedy Texas and probably several other Southern states in November). A few Veep nominees have marginally strengthened the ticket (Edmund Muskie in 1968, Walter Mondale in 1976, and Al Gore in 1992 aided Hubert Humphrey, Jimmy Carter, and Bill Clinton, respectively). Other VP choices were awkward distractions (including Geraldine Ferraro in 1984, Dan Quayle in 1988, and Sarah Palin in 2008). However, most Veep selections appear to have had little impact on the only thing that matters — the Electoral College tally.

Much of our modern VP history underlines a couple of conclusions. First, you never know where, or to whom, the process will lead, and most of the early speculation about the ultimate destination is dead wrong.

Second, the presidential candidates frequently make mistakes, if we define a mistake as a VP nominee who will fail to add some electoral votes or (at the very least) do no harm to the ticket. Over the decades I’ve wondered if the presidential nominees and their top managers have been determined to find someone the press and prognosticators haven’t mentioned — to show how clever and visionary the almost-president is. My advice: Better to be less creative and actually win the election.

So what about 2016? Clinton and Trump have nearly 100% name identification and are already well-defined, for better or worse. One suspects that this year, the VP choices — unless they bring disaster — will be less influential than usual. The hoopla surrounding the announcements will suggest otherwise, but even faster than usual, the 2016 VP designates will fade from the voters’ calculus (except during the one vice presidential debate in October). Clinton and Trump are deeply polarizing, and it is difficult to believe that many people will be swayed to one side or the other — much less change sides — because of the No. 2s on the ticket.

There are exceptions, though. First, suppose a VP candidate is from a key swing state that is truly in contention. The hometown effect might add two-to-three percentage points in the state, and that would be significant if the election is close. It is also possible that Trump and Clinton will play symbolic politics this year and choose a woman and/or someone from a minority ethnic or racial group. Perhaps that is worth a point or two with the target audience. Third, Trump has problems with conservatives and the GOP establishment while Clinton wants to win over liberals and Bernie Sanders’ backers. Their VP choices will probably take into account their intraparty needs.

Doubling down on strength is another option, as Bill Clinton showed in 1992 when he chose a similar young Southern moderate, Al Gore, to complete his ticket. Does Hillary Clinton create the first-ever, major-party, non-white-male ticket by picking another woman or a Hispanic, Asian, or African-American for her VP?

What about age considerations? Trump will be 70 and Clinton 69 at the time of the election — the most senior pair of major-party candidates ever. When Ronald Reagan won at age 69 in 1980, he became the oldest president ever elected. Average life span is expanding, and both Trump and Clinton appear vigorous, so age is less of an issue 36 years after Reagan’s breakthrough. Still, will the White House candidates want to balance their tickets with a younger VP? Some Clinton associates have hinted that she favors an older VP who does not plan to run for POTUS to succeed her, on the Dick Cheney and Joe Biden model. This may in part be a reaction to her experience with Al Gore, whose own White House ambitions collided with the preferences of the Clintons during President Clinton’s troubled second term.

It’s worth mentioning that the Democrats have a built-in Veep advantage this year. The White House party has the second convention, immediately following the Republican Cleveland conclave in July. Thus, Clinton can see the final GOP ticket on parade before her final choice of VP is announced, giving Democrats the opportunity of checkmating Trump’s pick (by geography, gender, race, etc.) While Clinton could announce her selection before or during the GOP convention, and thereby generate competing headlines, the early guess is that she’ll wait in order to build an audience for her party’s Philadelphia show. The announcement of a ticket mate is genuine drama that can keep people tuned in.

So get ready for the 2016 vice presidential version of Survivor, The Apprentice, and American Idol rolled into one. During the sorting process, loads of contestants will be fired or voted off the island, while two presumably lucky individuals will be put on the path to national office. It’s a more serious game than reality TV, of course. Since 1960, more than half of the 21 individuals who ran to be VP have been candidates for president at some point, and two (Lyndon Johnson by succession and George H.W. Bush by election) have made it to the White House.