It is arguable that a whole new era in American politics was spawned by 9/11. Since then, compromise has become a dirty word to many and “compassionate conservatism” has gone the way of the Edsel. The two major parties are offering two competing, and vastly different, visions of America in a world that is both physically dangerous and economically unstable.

This new era is characterized by stubborn partisanship and ongoing polarization that has drawn constant criticism from voters and pundits alike. Yet thus far there has been one positive outgrowth of this visceral political environment in the form of vastly increased turnouts, particularly in presidential elections

The last two presidential contests have offered choices, not echoes, and voters have responded by flocking to the polls. In 2004, fully 60% of the citizen-eligible population cast ballots for the first time since 1968 (the last presidential election before the voting age was lowered to 18 years old). In 2008, the turnout rate grew again to nearly 62%.

But evidence is building that voter participation this year may fall well below that mark. The 2012 presidential contest so far has failed to excite voters, unlike the campaigns of both 2004 and 2008.

The former was largely a referendum on President George W. Bush and his controversial Iraq war policy. It fully engaged both parties. The Democratic presidential vote jumped by 8 million from the “dead heat” election of 2000, while the Republican vote increased by more than 11 million — giving Bush a narrow victory.

In 2008, the passion was all on the Democratic side, stimulated by the historic nature of Barack Obama’s candidacy, the worsening economy and widespread antipathy toward President Bush. Successful party registration drives among youth and minorities set the stage for a one-sided Democratic surge that fall, when the Democratic presidential vote grew by another 10 million votes from 2004. Dispirited Republicans saw their tally drop by 2 million from four years earlier.

This year, though, it is hard to find much enthusiasm in either party. Turnout for the presidential primaries, which approached 60 million in 2008, was roughly half that this year. The decline among Democrats from the high-voltage contest between Obama and Hillary Clinton four years ago (which drew nearly 37 million primary voters) to this year’s total of about 9 million is understandable given the absence of a Democratic race in 2012. But the Republican presidential primary vote also went down this time — from nearly 21 million in 2008 to less than 19 million — with only the primary in Utah June 26 remaining to be held.

As for Romney and Obama, their primary performances among the party faithful this year were at best a mixed bag. Romney won GOP contests in battleground states such as New Hampshire, Florida, Ohio and Wisconsin, but overall drew only 40% of the Republican primary ballots cast during the competitive stage of the party’s nominating campaign. In addition, more than half of the roughly 9.5 million primary ballots for Romney this year have been cast during the post-April 3 “mop up” stage, when he was essentially running unopposed.

On the Democratic side, Obama has suffered the embarrassment of losing more than 40% of his party’s primary vote to various “no names” in Arkansas, Oklahoma and West Virginia, as well as to an “Uncommitted” line in Kentucky. No other recent president who ran essentially unopposed for renomination — Ronald Reagan in 1984, Bill Clinton in 1996 or George W. Bush in 2004 — lost more than 25% of the vote in a single primary.

Fortunately for Obama, the states where he did so poorly are not integral to his reelection. He ran much better this year in contested Democratic primaries in battleground states, taking 79% in North Carolina, 81% in New Hampshire and a nearly unanimous 98% in Wisconsin.

At first glance, it would appear that a lower turnout this November would pose a greater problem for the Democrats. Republicans fare well among constituencies that traditionally turn out to vote without much prodding, such as affluent and older voters. Obama put together a winning coalition in 2008 built in large part on an unusually high turnout from youth and Hispanics, normally low turnout groups. Reassembling that coalition in 2012 will be a tall order for the president in an environment where much of the luster and enthusiasm from his initial presidential campaign has worn off.

With little to say that is positive, both parties are seeking votes with largely negative campaigns that tout the high stakes of the election. Republicans are counting on many voters that are not too keen on Romney being galvanized by a sharp anti-Obama message. Democrats, meanwhile, hope that the pro-Obama voters of 2012 who have become disenchanted with the president and his administration can be kept in the fold by the prospect of a Republican president and Congress.

The negative campaigning is not likely to fuel a huge outpouring of voters in November. Yet high turnouts are not necessary to produce a consequential, even historic election. When Franklin D. Roosevelt was first elected in 1932 — a Depression-era contest that set the stage for the New Deal and a Democratic era in American politics — turnout was less than 60% of the electorate. When Harry Truman scored his fabled come from behind victory in 1948, the turnout rate was a bare majority. And when Reagan was initially elected in 1980, producing a turn to the right in American politics, the rate of voter participation was less than 55%.

In short, Obama’s reelection or defeat this fall may make this a memorable election regardless of the level of voter participation. But if the turnout rate actually does go down in 2012, it will remove one of the few positive aspects of this largely lamentable political era. 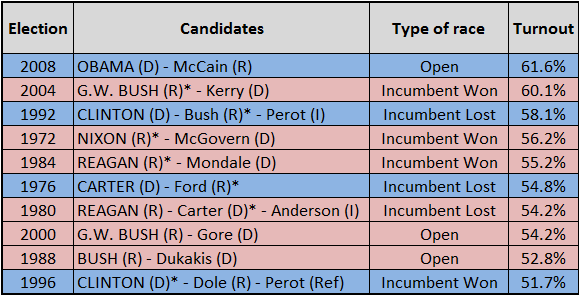 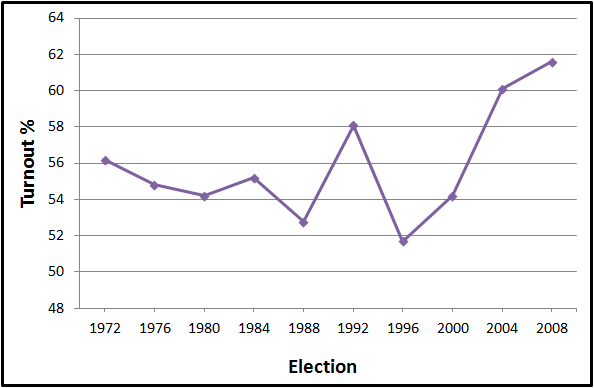 Note: The voter turnout rate is based on the presidential vote as a share of the voter-eligible population. Non-citizens and ineligible felons are excluded from the total, while eligible voters overseas are included. Significant presidential candidates that ran as an independent are indicated by “I” — “Ref” denotes the Reform Party. * denotes incumbent.
Source: Vital Statistics on American Politics 2011-2012 (Sage/CQ Press) for voter turnout rates. Those for the presidential elections of 2000, 2004 and 2008 are subject to amendment. 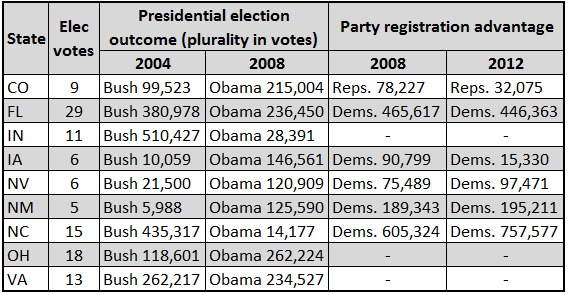 Note: In Colorado, Iowa and Nevada, party registration totals are given for both active and inactive voters. The numbers used here represent a combination of both. A dash (-) indicates that the state does not register voters by party.