Skip to content
Home
/
Where Both Parties Overperform in the House

— As we head into a once-a-decade redistricting cycle, we analyzed which states have one party that is currently overperforming in its House delegation compared to that party’s share of the 2020 presidential vote.

— Overall, the GOP has notched notable overperformances in 19 medium-to-large-sized states, compared to 11 for the Democrats. However, the total number of excess seats for each party from these states is roughly in balance, though Republicans have a slight edge: 32 for the GOP, 28 for the Democrats.

As the political world heads into a frenzied, once-every-decade redistricting process, it seemed like a good time to look at which states currently bless one party with a disproportionate share of U.S. House seats — and whether, nationally, one party has benefited from these excess seats more than the other.

“Excess” seats for one party may stem from gerrymandering, but they don’t have to. The vagaries of how a state’s population is distributed may make it hard to draw districts in precise alignment with the overall partisan balance in that state. But how the lines are drawn can make a difference, at least on the margins.

We began our analysis by calculating the percentage of House seats currently held by each party in each state (the “actual” breakdown), along with the percentage won by Joe Biden and Donald Trump in the 2020 election (the “ideal” breakdown). The 2020 presidential race isn’t the only metric we could have used to determine baseline partisanship for each state, but it’s the most straightforward.

(Some technical notes: We ignored the 15 states with only one, two, or three House seats, because states this small would distort the comparison. We also assumed that the currently vacant House seats will be filled by members of the same party once special elections are held. And we did not factor in the pending expansions or contractions in the state delegations due to reapportionment.)

So what did we find? Here are the states where Republicans are currently faring better in House seats than their percentage of the 2020 presidential vote would indicate. 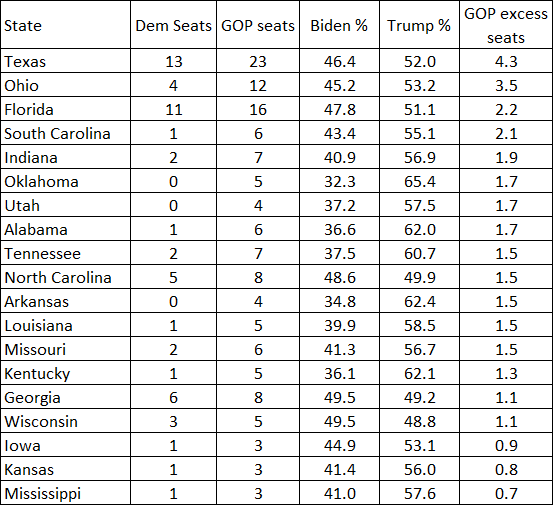 Collectively, these 19 states gave Republicans 32.4 seats beyond their presidential performance. Not surprisingly, 17 of these 19 states were won by Donald Trump, and the two that were not — Georgia and Wisconsin — were each decided by less than a percentage point in 2020. Even more strikingly, all 19 have Republican-controlled legislatures.

Some of the most impressive GOP overperformances have come from relatively small states. The party has squeezed extra seats out of such states as Arkansas, Oklahoma, South Carolina, and Utah — states that have only four-to-seven House seats total. However, there are no Democratic-held House seats left in Arkansas, Oklahoma, and Utah and only one Democratic seat left in South Carolina, a seat that has protection from the Voting Rights Act. So in these states, the GOP has essentially maxed out in excess seats (Democrats did win an extra seat apiece in three of these four states in 2018 — Oklahoma, South Carolina, and Utah — showing the risks to a dominant party of spreading its voters too thin in its congressional map. But the Republicans recaptured these seats in 2020).

But the three biggest generators of excess seats for the GOP — Texas, Ohio, and Florida — will be closely watched during this redistricting cycle for potential additional Republican gains. In Texas, Republicans control the governorship and the legislature, and in the past, the party has not been afraid to draw aggressive maps (as were Texas Democrats when they were in control decades ago). Republicans also control the governorship and the legislature in Ohio and Florida, although citizen-initiated changes to and restrictions on the redistricting processes in both states could serve to rein in some of the partisan advantage.

How about the states where Democrats are overperforming their presidential performance in the House? Here’s the list: 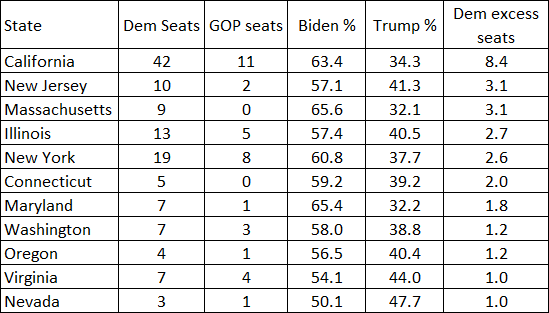 Here, we mostly see a list of solidly blue states: Each of these 11 states backed Biden in 2020, and they all have Democratic legislatures.

While the Democrats have 11 states producing noteworthy excess seats for their party, compared to 19 for the Republicans, their total number of excess seats ended up pretty close to what the GOP notched: 28.1 excess seats. Rounded, that’s a 32-28 edge for the GOP in excess seats. Were it not for the exceedingly close margin in the House today, that would almost be a rounding error in a 435-member chamber.

By contrast, the state that gives Republicans their biggest excess-seat advantage offers only half as many seats as California — Texas, with 4.3 excess seats for the GOP.

Looking ahead to the current round of redistricting, the Democrats’ options for increasing their excess seats is more limited than the Republicans’ options. California, New Jersey, Virginia, and Washington state have commissions of one type or another while Massachusetts and Connecticut already have all-Democratic delegations. The states with the biggest potential for additional excess seats for the Democrats are Illinois and New York.

Finally, there are five states where the partisan breakdown for House seats is roughly in balance with the presidential vote divide in 2020. They are Arizona, Colorado, Michigan, Minnesota, and Pennsylvania. Perhaps appropriately, three of these five states were also core battlegrounds in the 2020 presidential race: Arizona, Michigan, and Pennsylvania.

These states are not the most obvious places to look for additional excess seats in the next round of redistricting. In Arizona, Colorado, and Michigan, commissions will draw the lines (the first draft of the Colorado map came out a couple of weeks ago). Minnesota, meanwhile, has a Democratic governor and a split legislature; Pennsylvania also has a divided state government, as well as a Democratic-majority state Supreme Court that already threw out a map mid-decade.

Here’s another way of looking at the patterns of excess House seats: There are very few states where the losing presidential party has secured any excess seats. The GOP has roughly one excess seat in Wisconsin and Georgia; Biden won both, but both states voted for Trump in 2016 and were on a knife’s edge in the 2020 presidential balloting.

In other words, the pattern of excess seats is yet another indication of how unified each state has become, up and down the ballot.