— This has led to questions about whether ideological fissures in the Democratic Party could make it harder for the party to rally around its eventual nominee.

— However, Democrats actually are more united on individual issue positions than Republicans, which may mean the Democrats are less divided than ideological self-placement suggests.

Why Republicans may be more divided than Democrats

The first round of debates exposed major differences among the candidates on issues such as health care and immigration, and this has led to growing concern among party leaders about whether Democratic voters will be able to unite behind the eventual nominee. Indeed, some of the more moderate candidates have warned that nominating a candidate from the party’s left wing could cause large numbers of moderate-to-conservative Democrats to stay home or even vote for Donald Trump, thereby ensuring a Republican victory.

A number of pundits and political observers have argued that concerns about potential moderate defections are well-founded because Democratic voters are sharply divided along ideological lines. They point to recent polls showing that while the large majority of Republican voters describe themselves as conservatives, fewer than half of Democratic voters describe themselves as liberals. 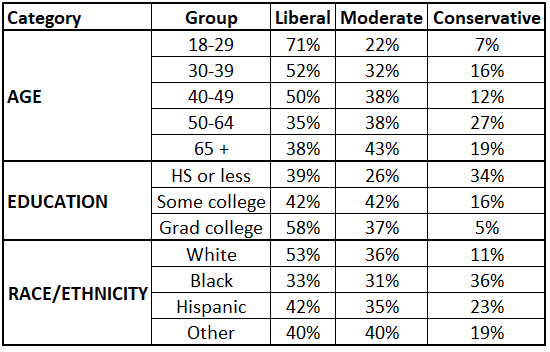 The ideological divisions evident in Table 1 are especially concerning to many Democratic leaders because they coincide with significant demographic divisions within the party. Data in Table 2 from the 2018 Pew Research Center survey show that among registered Democrats, there were sharp divisions in ideological identification based on age, education, and race. Older Democrats, those who did not graduate from college, and nonwhite Democrats were much less likely to identify as liberal and more likely to identify as moderate or conservative than younger Democrats, those with college degrees, and white Democrats. Thus, among white Democrats, liberals outnumbered conservatives by 53% to 11% but among black Democrats, conservatives outnumbered liberals by 36% to 33%. And while 71% of Democrats under the age of 30 identified themselves as liberals, only 37% of those over the age of 50 did so.

Of course, ideological identification is not the only way to measure the political leanings of voters. We can also examine their views on specific current policy issues. Fortunately, in addition to asking respondents about their ideological identification, the 2018 Pew Research Center survey asked them about their views on several of these issues. In order to compare the policy preferences of voters, I chose six of these issues that have been prominent in recent elections and were asked of all respondents in the survey: abortion, black rights, gun control, immigration, business regulation, and health care. All of the issues except immigration involved binary choices, so I was able to classify responses to these questions as either liberal or conservative. In the case of immigration, respondents were offered a middle position between the liberal and conservative options. 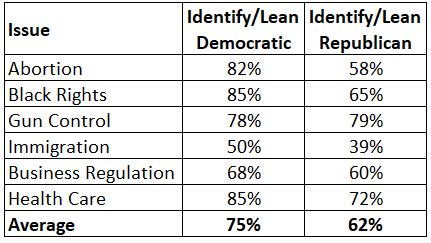 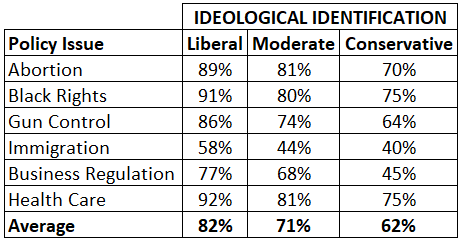 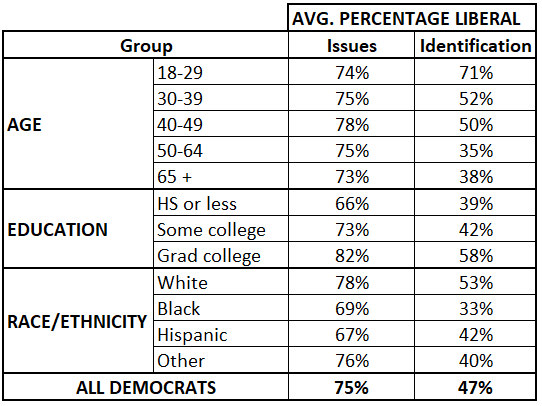 Table 5 compares the average percentage of Democratic voters taking the liberal side on the six policy issues with the percentage who identify as liberal among various key demographic groups. We saw in Table 2 that younger, better educated, and white Democrats were far more likely than older, less educated, and nonwhite Democrats to identify as liberal. However, the data in Table 5 show that divisions based on age, education, and race are much less impressive when it comes to issue positions. In fact, differences based on age are almost nonexistent — older Democrats are every bit as liberal as younger Democrats on the issues. And while less educated and nonwhite Democrats are not as liberal on these issues as more educated and white Democrats, they are actually quite liberal. An average of 66% of Democrats with no college took the liberal position on these issues. Likewise, an average of 69% of black Democrats and 67% of Hispanic Democrats took the liberal position on these issues.

In order to compare the effects of ideological identification and policy preferences on opinions of Trump, I combined opinions on the six policy issues included in this study into a scale measuring overall policy liberalism vs. conservatism and collapsed that scale into three categories: liberal, moderate, and conservative. Thirty-seven percent of registered voters were classified as liberal, 41% as moderate, and 22% as conservative on this six-item issue scale. In contrast, only 27% of registered voters identified as liberal versus 33% who identified as moderate and 40% who identified as conservative.

Table 6: Approval of Trump by ideological identification and policy preferences

When it comes to ideological identification, Democratic voters are far more divided than Republican voters. Around two-thirds of Republican voters identify as conservative while fewer than half of Democratic voters identify as liberal. Many observers of the current presidential campaign have cited this fact to argue that ideological divisions are a serious potential threat to Democratic unity, especially if the party nominates a strongly liberal candidate. But a closer examination of recent polling data indicates that when it comes to specific policy issues such as abortion, gun control, and health care, Democratic voters are actually considerably less divided than Republican voters. Moreover, these data show that divisions among Democrats based on age, education, and race are much less significant when it comes to policy issues. What makes this all the more important is that policy preferences appear to have a much stronger influence than ideological identification on voters’ broader political outlook including their opinions of President Trump. These findings suggest that the task of uniting Democrats behind the party’s eventual nominee may not be as difficult as some pundits and political observers have suggested.

[1] Results were very similar when I examined voting intentions in the 2018 midterm election instead of Trump approval. The issue scale was a much stronger predictor which party voters intended to support in the midterm election than ideological identification.