Despite their small populations, tiny numbers of national convention delegates and racially homogeneous electorates, the national parties continue to allow Iowa and New Hampshire to exert an outsized influence on the selection of the presidential nominees by kicking off the primary and caucus season. Because they go first and second, the national media provide massive coverage of the contests in these two states. This means that what happens in Iowa and New Hampshire can influence the opinions of voters in the rest of the country and, therefore, the results of later contests and the eventual outcomes of the nomination races. The last candidate to win a major party nomination without winning in either Iowa or New Hampshire was Bill Clinton in 1992. He finished second in New Hampshire, declared himself the “comeback kid,” and went on to win the Democratic nomination. 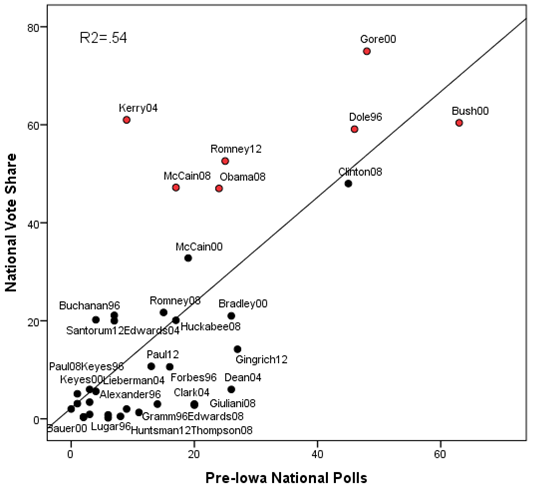 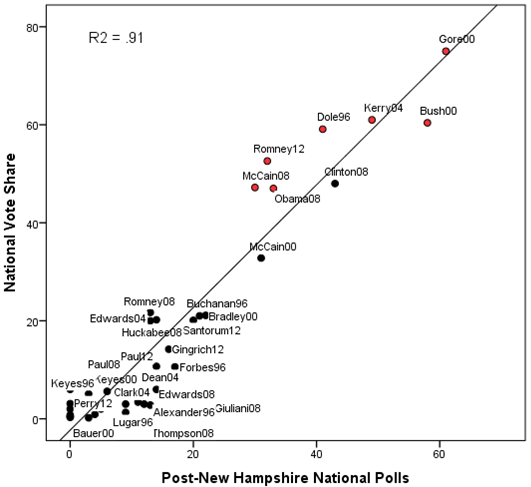 The total primary vote is very important because in the post-reform era of presidential nominations, the winner of the total primary vote almost always wins the nomination. Candidates who went on to win their party’s nomination are shown on this graph with red dots. The only candidate since 1996, and indeed the only one since 1976, who won a major party nomination without winning the most votes in the primaries was Barack Obama in 2008. Obama won slightly fewer votes than Hillary Clinton in Democratic primaries that year but won more delegates because he decisively defeated Clinton in the caucus states. 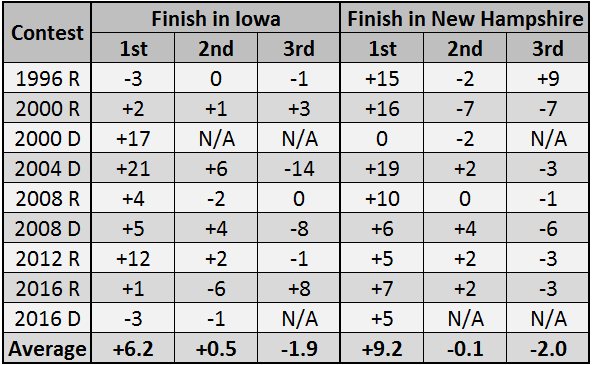 The variability in the impact of winning in Iowa and New Hampshire on the national polls suggests that these effects are mediated by the way the results are interpreted by the national media. How much of a boost a candidate gets from winning in Iowa or New Hampshire may depend on how much additional media coverage that candidate receives as well as the tone of that media coverage. This may depend, in turn, on whether the winner is portrayed by the media as doing better or worse than expected before the caucus or primary. Thus, Rubio may have gained support in national polls following his third place finish in Iowa this year because his showing was widely described as exceeding expectations in the national media.

The 2016 contests: On to Nevada and South Carolina

These trends suggest that Donald Trump should be considered a solid favorite to win the Republican presidential nomination. Since 1996, no candidate leading by such a wide margin in national polls after the New Hampshire primary has failed to win a major party nomination. The only caveat here is that Trump is a very unusual Republican frontrunner. No Republican frontrunner since Barry Goldwater in 1964 has generated anything approaching the level of resistance among Republican Party leaders and elected officials that Trump has generated. So far, however, their resistance has had little impact on GOP voters, partly because the party “establishment” has been unable to unite behind a single alternative to Trump and partly because many of these party leaders and elected officials dislike Ted Cruz even more than they dislike Donald Trump. The results of the South Carolina primary on Saturday and the Nevada caucuses three days later should provide further evidence about whether Trump’s march to the GOP nomination will continue unimpeded or suffer a serious setback. Based on the most recent polling in both states, the former seems much more likely than the latter.

On the Democratic side, things look very different. While Hillary Clinton continues to hold the lead, based on the results of the most recent national polling she can no longer be considered the prohibitive favorite to win the Democratic nomination. However, whether Bernie Sanders can continue to cut into Clinton’s lead and become the frontrunner himself will probably depend on what happens in the next two tests for the Democrats — the Nevada caucuses on February 20 and the South Carolina primary on February 27.

The history of the Nevada caucuses is too short to estimate how their results may affect the trajectory of the Democratic race. Recent polling suggests that the contest between Clinton and Sanders is very close, but polling is very difficult in a caucus state with a very low turnout like Nevada. Moreover, whatever impact Nevada has on the Democratic race is likely to be drowned out one week later by the results in South Carolina, which will receive extensive national media coverage. 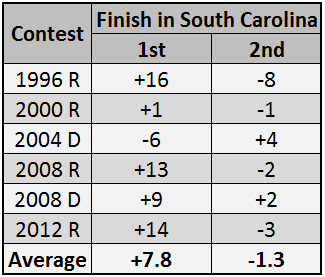 According to recent polling in South Carolina, Hillary Clinton is a strong favorite to win the Democratic primary — she currently leads by an average margin of more than 20 points. And based on the data in Table 2, a big win in South Carolina, especially if it follows a win in Nevada, could well restore Clinton’s lead in national polls to something closer to what it was before Iowa and New Hampshire and reestablish her position as the clear favorite to win the Democratic nomination. On the other hand, a relatively narrow win for Clinton in South Carolina, especially if it follows a loss in Nevada, would probably mean that the battle between Clinton and Sanders will be similar to the battle between Clinton and Obama in 2008 — protracted and nasty.