— A perpetual swing state, Wisconsin seems poised to play a pivotal role in next year’s presidential election. Milwaukee will be especially prominent as the host of the 2020 Democratic National Convention.

— With a special election in Wisconsin’s 7th District on the horizon, we rate the seat as Likely Republican. Like much of the rural Great Lakes region, the area’s transition from blue to red has accelerated in the Trump era.

— In South Jersey, Rep. Jeff Van Drew’s (NJ-2) expected switch from Democratic to Republican changes our rating for his seat to Leans Republican from Leans Democratic, though the state of the race is fluid.

As 2019 closes out, it may be worth looking to one of the states that is expected to play an outsized role in next year’s presidential election: Wisconsin.

The Badger State was truly decisive in 2016: While it’s easy to lump it in with Michigan and Pennsylvania as the three states that decided the election, Donald Trump’s margin in Wisconsin was the largest of the three nail-biters — meaning that Trump could have won even without Michigan or Pennsylvania so long as he won Wisconsin. Some recent polls showing the state effectively a coin flip give Democrats heartburn — and represent a counterpoint to those arguing that Trump is an underdog next year.

Of all the battleground states on the radar, Wisconsin perhaps best sums up how President Trump was able to pull off his historic upset. Wisconsin, part of the Democrats’ vaunted so-called “Blue Wall,” voted for President Obama twice by relatively comfortable margins. Overconfident in her chances there in 2016, Hillary Clinton’s campaign seemed to take the state for granted, as she held zero general election rallies in the state. The Democrats’ complacency fed into Trump’s unexpected resilience in the state and allowed him to carry its 10 electoral votes with just a 47% plurality.

In many ways, Wisconsin has, politically, a split personality. The state’s current U.S. Senate delegation is perhaps the most visible testament to this. Nine states currently send split delegations to the U.S. Senate; ideologically, Wisconsin’s duo may be the furthest apart, but their similar electoral trajectories illustrate how deeply national currents can inform state results.

Sen. Ron Johnson (R) was elected in 2010 in large part by making overtures to the nascent Tea Party movement, defeating liberal champion Sen. Russ Feingold (D) — with an assist from the red lean of the cycle. Johnson, rather surprisingly, prevailed in a 2016 rematch, running a bit ahead of Trump’s margin. In 2012, longtime Madison-area Rep. Tammy Baldwin (D), a member of the Congressional Progressive Caucus, won the state’s other Senate seat by beating former Gov. Tommy Thompson (R), an institution in state politics. In the blue wave of 2018, Baldwin was reelected by a clear 11% margin, running considerably ahead of the rest of her ticket.

Just within the past 14 months, the Badger State’s political volatility has been on full display. In 2018, Democrats recruited popular state Superintendent of Public Instruction Tony Evers (D) and, after three previous attempts, defeated their resilient nemesis, Gov. Scott Walker (R), in the November election. Though Evers’ margin was just 29,000 votes, or about one percentage point, he helped carry all the other statewide Democratic candidates to victory with him.

A unique electoral quirk about the state is its spring elections for Supreme Court; though judicial candidates are nominally nonpartisan, the major parties actively support candidates. In April 2019, just six months after the GOP’s statewide shutout, conservatives rebounded to pull off an upset win; as a result, their majority on the state’s Supreme Court is secure until at least 2023 (barring a surprise vacancy).

In that court race, the Democratic-aligned candidate lost in large part because she couldn’t match Hillary Clinton’s margins in the Milwaukee area. Clinton’s own numbers in the Milwaukee area, in turn, were not strong. Turnout was down statewide in Wisconsin from 2012 to 2016, but Clinton received about 44,000 fewer votes than Obama in Milwaukee County. This was nearly double Trump’s overall statewide margin of roughly 23,000. In the state’s other liberal bastion, by contrast, Dane County (Madison), Clinton actually fared better than Obama, receiving about 1,600 more votes than him.

Map 1 shows that, despite the lower overall turnout in Milwaukee County from 2012 to 2016, familiar trends emerged. Milwaukee proper, which is heavily African American and cast over half the county’s vote, saw the steepest turnout drops in the county and thus the city swung slightly toward the GOP compared to 2012. The wealthier inner suburbs, which are considerably whiter, saw less severe turnout drops but reacted poorly to Trump’s brand of Republicanism. 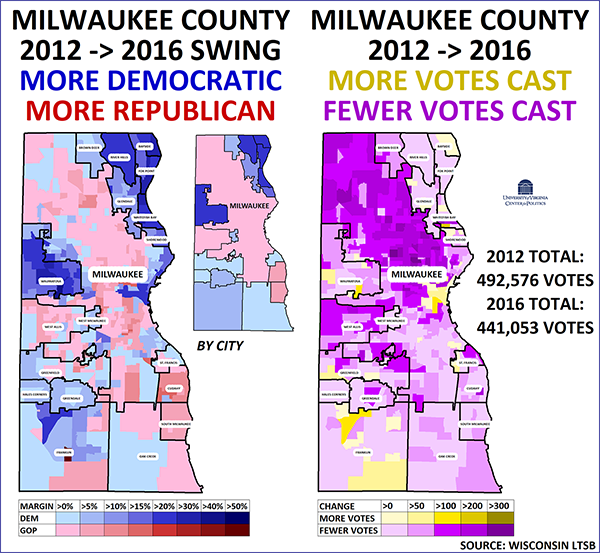 Energizing black voters in Milwaukee proper will be a chief priority of state, and national, Democrats in 2020 — perhaps not coincidentally, the city will host next year’s Democratic National Convention.

Through essentially all of 2019, Trump’s national approval has hovered in the low-40s; nationally, this would seem to bode well for Democrats, but, as 2016 showed, the election will be decided in a handful of swing states. Last week, state-specific polling from Marquette University Law School showed the president roughly tied with his prospective Democratic opponents. Marquette also pegged the president’s approval rating in the state at 47% — exactly the share of the vote he received there in 2016. That polling mirrored that of a New York Times Upshot/Siena College poll released in early November. Taken together, the polls show that Trump has a very real path to a plurality in the Badger State next year.

Looking to 2020, the question is which state will show up in November: the Wisconsin of Tammy Baldwin and Russ Feingold or the Wisconsin of Scott Walker and Ron Johnson? Perhaps it’ll be all of the above, and a reprise of the 2016 presidential, 2018 gubernatorial, and 2019 state Supreme Court races — in other words, close.

Before November of next year, political junkies will have a federal election to look forward to in the state, as its 7th Congressional District is vacant and will have a May special election with partisan primaries in February.

The trends there help illustrate what’s been helping Republicans not just in Wisconsin, but also in other parts of the Upper Midwest.

WI-7 takes up a wide rural section of the state’s north and was represented for much of the last half-century by Democrat Dave Obey; getting to Congress via a special election himself in 1969, Obey retired in 2010, leaving the seat open in a red wave year. First-time candidate Sean Duffy (R) flipped the seat that year and was reelected four times until his departure in September.

Politics in WI-7 is shaped by what the Almanac of American Politics describes as a “lumberjack populis[m].” In a contemporary context, this meant that this heavily forested area was fertile ground for President Trump’s message. Indeed, in 2016, it was his best district in the state, giving him over 57% — the suburban WI-5, which features the GOP’s more traditional base in the state, gave him a slightly lesser 56.5%.

WI-7 sits in the center of a region that’s been trending red since before President’s Trump’s tenure. Let’s consider the three congressional districts that border Lake Superior. To WI-7’s west, MN-8 is largely based in the Gopher State’s mineral-rich Iron Range; to its east, MI-1 includes the state’s Upper Peninsula and parts of northern Michigan. All three districts are tied together by mining interests and have vibrant traditions of organized labor. As deindustrialization hit the region, the GOP made inroads in these formerly blue strongholds. 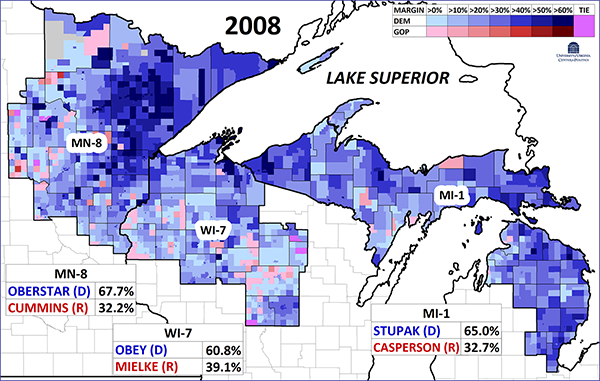 By 2010, the character of the region changed markedly, at least at the congressional level, as part of the GOP’s national rout. Sensing the year’s hostile environment, Obey and Stupak retired — their seats would go on to flip — while Oberstar ran for a 19th term but was defeated in a stunning upset (Map 3). 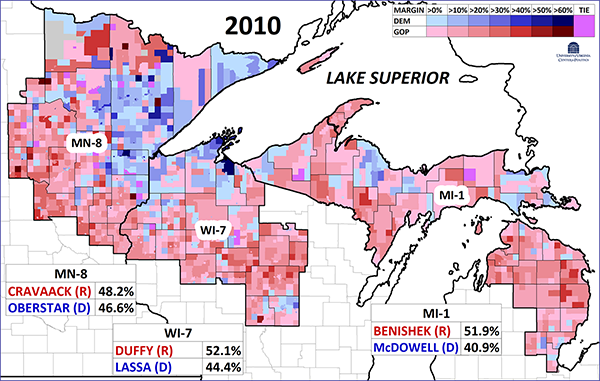 Despite the blue wave that powered the Democrats’ 2018 takeover of the House, all three seats stayed in Republican hands; in fact, Democrats regained MN-8 in 2012, only to lose it again in 2018. (For those who were following the recent elections in the United Kingdom, there are some similarities between districts such as these in the United States and some of the old Labour strongholds that fell to the Tories last week.)

Though all three seats were altered somewhat for 2012 as a result of the decennial redistricting process, their fundamental geography remains the same. This trio illustrates that in some regions of the county, 2018 was not much different from 2010. In the case of WI-7, that type of stasis would suggest Republicans are clear favorites going into the special election, hence our Likely Republican rating.

Finally, one similarly Republican-trending district that made headlines this week was New Jersey’s 2nd. Freshman Rep. Jeff Van Drew (NJ-2) seems poised to leave the Democrats and join the GOP; this would be the first true congressional party switch in 10 years. Though other Democrats hold districts that are friendlier to the president, Van Drew was especially critical of his (former?) party’s impeachment efforts.

Had Van Drew stayed a Democrat, the Crystal Ball would have considered him a favorite, although it was clear that he was getting a lot of blowback from Democratic officials and activists back home for his stance against impeachment. He was elected in 2018 by a 53%-45% margin after the president carried NJ-2 by a similar 51%-46% spread in 2016. The 2018 blue wave hit especially hard in New Jersey; after the midterms, Democrats controlled all but one of the state’s 12 congressional seats.

Given the growing ideological chasm between the parties, successfully navigating an aisle switch would seem like a tricky proposition in today’s political environment. Going forward, Van Drew’s chances in the GOP primary will largely depend on his support from the president — the field already included several candidates.

Before his time in Congress, Van Drew was a fixture in South Jersey politics; he represented the area in the legislature since 2002. Without the crossover support that Van Drew’s brand would provide to Democrats, it seems reasonable to start the race off at Leans Republican. 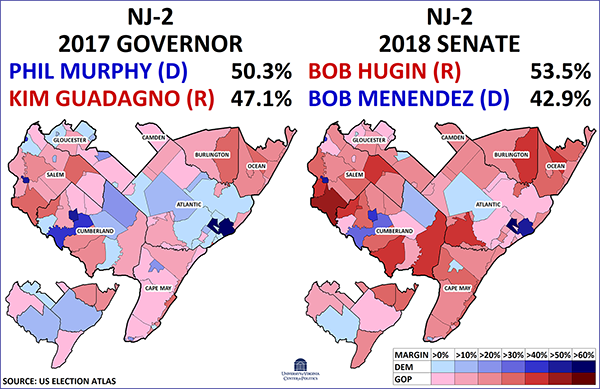 Though Menendez was weighed down by a corruption trial during part of the campaign, the 2018 Senate race was a higher turnout contest than the 2017 gubernatorial race — despite polling 7% worse than Murphy, Menendez received nearly 20,000 more raw votes — and thus seems to offer a better baseline for a presidential year. Republicans performed well in some state legislative races in the area last month, reinforcing the GOP trend there.

There’s a long way to go in NJ-2: Several Democrats are mulling runs, and Van Drew is going to have to navigate a primary himself. This district is hardly a write-off for the Democrats, but perhaps the most important factor is that Trump carried it by close to five points in 2016; if he can replicate or even build on that margin, he will provide cover to Van Drew — or another GOP nominee.