— Once again, Wisconsin appears to be the tipping point state in the Electoral College, though its 10 electoral votes are back in the Democratic column this year.

— In 2016, Donald Trump made major inroads in western Wisconsin. Despite coming up short statewide, his gains in the region largely held.

— Joe Biden’s strength in the state was powered by a strong showing in the Milwaukee region, though future Democrats may not be able to replicate that.

While a critical mass of votes are still being counted in several states — politically, these states range from those as safe as California to some as hotly contested as Pennsylvania — in Wisconsin, it looks like we have close to our final tally. As of Tuesday’s canvass, former Vice President Joe Biden leads President Trump by 20,608 votes, or about sixth-tenths of a percentage point. The president appears to be seeking recounts in two key Democratic counties, Milwaukee and Dane (Madison), although recounts typically do not lead to significant changes in the vote tally.

Though this margin seems excruciatingly close, Badger State voters are no strangers to close elections. In four of the last six presidential elections, Wisconsin has been decided by less than a percentage point — the only exceptions were when Barack Obama was on the ballot. So despite the unusual nature of this presidential election, the result here was just as we would have predicted it at the onset of the cycle: on a knife’s edge.

Notably, 2020 represented the second consecutive presidential cycle where Wisconsin was the coveted “tipping point” state (though when considering 2016’s faithless electors, the designation could have gone to Pennsylvania that year). In 2016, Hillary Clinton ended up earning 232 electoral votes. But what would a hypothetical victory for her have looked like? Aside from the 20 states that she won, the two states that she came closest to carrying were Michigan and Pennsylvania — Trump carried the former by .22% and the later by .72%. Still, even if she pulled off wins in those two, that would have only got Clinton to 268 electoral votes, two short of the needed 270. The next state in line would have been Wisconsin, where she lost by .76%. At that point, the Badger State’s 10 electoral votes would have tipped the election to Clinton, giving her 278 votes.

For Trump to have pulled off a win this election, his path would have looked remarkably similar to that of his former rival, though there’s a twist. To start, Trump has earned 232 electoral votes, the same tally as Clinton. As of Wednesday, the two closest states that Biden is leading in by percentage margin are Georgia (.28%) and Arizona (.31%), respectively. Both were states that Trump carried in 2016 and, if he held them this year, he’d be standing at 259 electoral votes. The next closest state currently in Biden’s column is Wisconsin. Had its 10 electoral votes gone to Trump in our scenario, it would have produced a 269-269 tie, and the election would have been decided by the House of Representatives. As we wrote last week, in all likelihood the House would have broken this tie in favor of Trump.

The Driftless Area lives up to its name

Sticking to the House, by almost all measures, 2020’s result was an underwhelming one for House Democrats, who will start the 117th Congress with a reduced majority. Thinking back in terms of state delegations, Democrats went into this month’s election controlling the Minnesota and Iowa House delegations — at best for Speaker Pelosi, both of those states will be tied. In Minnesota, 30-year veteran Collin Peterson (D, MN-7) lost his bid for reelection, and first-term Rep. Jim Hagedorn (R, MN-1), a top Democratic target, secured a second term 49%-46%. Voters in northeastern Iowa ousted first-term Democrat Abby Finkenauer (D, IA-1), and just to the south, the state’s open 2nd District is undergoing a recount, but it could be another GOP gain.

Just east of the Iowa border, one of the most symbolic House results of the night was in Illinois. Rep. Cheri Bustos (D, IL-17), who headed up congressional Democrats’ national campaign efforts, held her seat with just 52%.

Why are these other states relevant to our analysis of Wisconsin? Well, one of the most disappointing results for Democrats there was in the western part of the state, along the border with those states. The Driftless Area is a region in the Upper Midwest that cuts across parts of northwestern Illinois, eastern Iowa, southern Minnesota and western Wisconsin. The region gets its name from the lack of glacial drift in the area, as its topography was largely untouched in the most recent ice age.

Politically, this heavily white area was known for its elasticity — Obama carried the region by 20% in 2008, but Clinton held it by less than 3% in 2016. After some promising results for Democrats there in 2018, the region seemed primed to snap back to Biden in this year. But instead, the region, ironically, lived up to its moniker: it didn’t drift much from its 2016 orientation.

Focusing in on the Badger State, last decade’s version of the 3rd District was roughly coterminous with Wisconsin’s segment of the Driftless Area. As Map 1 shows, Obama carried the old WI-3 by 58%-41% in 2008 and in 2012, he would have carried it by a still-comfortable 9 percentage points. But in 2016, the area went to Trump by just over 6% — and that margin was unchanged this month. Of the 19 counties that were fully, or partially, included in the old WI-3, a dozen supported Obama twice and then did the same for Trump.

At the congressional level, Rep. Ron Kind (D, WI-3) has long enjoyed broad crossover support in the region. This month, he was reelected to a 13th term, but his 3% margin was the closest of his career. Despite Kind’s success, the current WI-3 may be a study in how gerrymanders can erode with time. For 2012, Republicans redrew the boundaries of Map 1’s lines so that Kind would have a more Democratic seat — in the process, they ensured Republicans in neighboring seats would be more secure, too. Biden still lost the current WI-3 by just under 5 percentage points.

That Biden carried the state with just two congressional districts — Madison’s WI-2 and Milwaukee’s WI-4 — speaks to the intensifying geographic sort the state has seen in recent years. Perhaps some of the pro-GOP trends in the Driftless Area will dissipate post-Trump. After all, in 2016, Sen. Ron Johnson (R-WI) ended up winning a second term by outperforming Trump’s statewide margin, but he did a few points worse in the western districts.

Unfortunately for electoral junkies, there was no Senate race this year to contrast the presidential topline to, so we may have to wait until 2022 to get a better sense of where the area is headed, at least federally. At the legislative level, state Senate District 32 was an open seat in the La Crosse area, hugging the state’s western border — though it narrowly supported Clinton in 2016, Republicans landed a well-known recruit in former state Sen. Dan Kapanke. It appears Democrats have held SD-32, albeit by just 589 votes.

Waukesha County, along with three of Milwaukee’s closer-in suburban communities — Greenfield, Wauwatosa, and West Allis — comprise much of the 5th Congressional District. For the past several decades, this has been a deeply conservative district. As recently as 2012, it was the most Republican district in the Upper Midwest. In fact, that year, it was the only district in Michigan, Wisconsin, Minnesota, Iowa, or the Dakotas where Mitt Romney cracked 60% of the vote.

If Trump’s populist brand of Republicanism was well-suited for the Driftless Area, it’s yielded decidedly meager returns for the GOP with the suburbanites in WI-5. In 2016, while Trump flipped WI-3, he carried WI-5 by a 56.5%-36.7% spread. This month, Trump’s share remained at just less than 57%, while Biden performed several percentage points better than Clinton.

Looking back to 2012, Map 2 shows that much of Biden’s gains over Obama in the district were driven by movement in the Waukesha and Milwaukee parts of the district. To the north, Washington, the most Republican-leaning of the “WOW” counties, saw a slight blue shift. 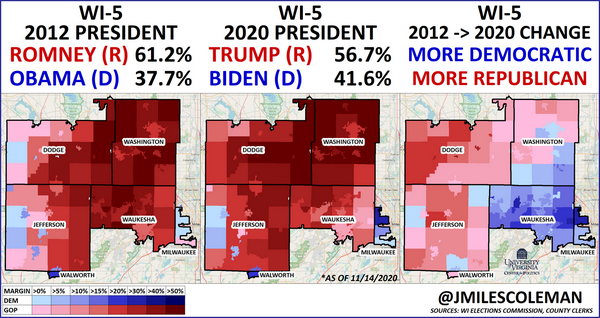 Looking longer term, we’ll have to see if state Democrats can replicate Biden’s performance in the district. One of the overarching questions of 2020 is whether the Democrats now “own” or were simply “renting” the anti-Trump, college-educated white vote in the suburbs.

In the House, longtime Rep. Jim Sensenbrenner (R, WI-5) retired this year. State Sen. Scott Fitzgerald, who has served in the legislature since 1995, won the open seat 60%-40% — that margin may be more typical of what Republicans will get in the area.

Of course, Biden’s gains weren’t limited to the Milwaukee suburbs. He carried the city itself by just over 146,000 votes, or about 3,000 votes more than the lead Clinton posted in 2016. This was not the case in some other major cities in “Blue Wall” states. In Philadelphia, his final raw vote margin was 4,000 less than Clinton’s, and his lead was almost 6,000 less in Detroit. So the Democrats ended up getting something of a boost in Milwaukee without actually having to physically hold their convention there.

Still, zeroing in on Milwaukee City, the ward-level shifts very much lined up with what national trends would imply. Biden performed considerably better than Clinton in the whiter wards, along the waterfront of Lake Michigan, while generally running slightly behind her in the city’s northwestern portion, which is majority Black. But just south of the East-West Freeway, a stretch of Interstate 94 which bisects the city, Biden lost votes in wards that have high Hispanic populations. The former vice president’s struggles with these voters proved costly in Florida and Texas, but this suggests the possibility that his slippage with Hispanics wasn’t regionalized to just Sun Belt states.

Elsewhere in the state, Biden saw some improvement in what Marquette University Law School pollster Charles Franklin calls the “BOW” counties: Brown, Outagamie, and Winnebago. Running from Green Bay to Oshkosh, the area has roots in manufacturing, but several communities there are growing faster than the state overall. Trump carried the BOW counties, collectively, 53%-46%, down from 52%-41% in 2016 — for Republicans going forward, the goal should be to win the area by double-digits.

Finally, a lesson from Wisconsin thus year is that, especially in one of the more polarized states in the country, there aren’t really such things as electoral “ceilings” or “floors.” In 2016, Clinton won Madison’s Dane County by a whopping 47% spread, making her the best-performing Democratic nominee there since, at least, 1892. With turnout in the county up 11%, Biden expanded that margin to almost 53%. By the same token, Trump’s 33% margin in rural Marinette County in 2016 was the best for any Republican nominee since 1920 — this month, he netted 1,227 more raw votes there, and expanded his percentage margin to closer to 35%.

The changes in Wisconsin this cycle pushed the state narrowly in favor of Biden after they broke for Trump in 2020. If we get to 2024 and Wisconsin once again casts the decisive vote in the Electoral College, no one should be surprised.