— Karofsky’s win was surprisingly decisive — it tracked closely with Sen. Tammy Baldwin’s (D-WI) showing in 2018, as she was reelected by 11%.

— Still, given differences in timing, turnout, and enthusiasm, neither party should bank on seeing this result replicated in November’s presidential contest.

Wisconsin is one of perhaps the two or three likeliest states to vote for the winning presidential candidate this fall, so it is no surprise that anything that happens politically in the Badger State attracts widespread attention.

A wider-than-expected victory by a Democratic-backed candidate in a state Supreme Court race decided earlier this week is therefore getting a lot of attention, but the specific factors in that race should caution us from projecting the results ahead to the fall.

Wisconsin remains very winnable for both sides in the presidential race.

For the past several years, following Wisconsin’s Supreme Court elections has been a recurring ritual for political observers. The court has seven judges, each with staggered, ten-year terms. With elections held in the spring, judges are officially nonpartisan, but both parties make their preferences known.

The usual interest in the race, which did not decide the majority on the Wisconsin Supreme Court but did allow liberals to cut the conservative edge from 5-2 to 4-3, was only amplified by the unique circumstances of the voting last week: Wisconsin held its election in the midst of the global pandemic, despite arguments from many that it was unsafe and unreasonable to do so.

Setting aside the various decisions made by Gov. Tony Evers (D-WI), the GOP-controlled state legislature, and conservative majorities on the state and federal Supreme Courts, the conventional wisdom before the election seemed to be that holding it on April 7 and also ensuring that absentee ballots had to be postmarked by that date advantaged Republicans in the Supreme Court race. Part of the reason for the conventional wisdom was that the city of Milwaukee, one of the core centers of Democratic voters in the state, cut its number of in-person voting locations from 180 to five.

As it turned out, the circumstances may have advantaged Democrats — or, perhaps, disadvantaged them so little that the particulars did not prevent them from winning the state Supreme Court seat comfortably.

That the Democratic-backed candidate, Jill Karofsky, defeated the Republican-backed incumbent, Dan Kelly, would not or should not have been a surprise to anyone prior to the pandemic. The election was scheduled to coincide with a presidential primary in which only one side, the Democrats, was slated to host a competitive presidential nomination contest. With no comparable race driving turnout on the Republican side, Democrats appeared to hold a considerable advantage.

Despite the public health crisis, that advantage held. We can see how this worked by comparing the 2016 election to 2020.

Wisconsin is an open primary state, meaning voters can choose to vote in either party’s primary. Surely, some number of voters who backed the conservative judicial candidate opted to vote in the Democratic primary — Kelly got about 60,000 more votes than were cast in the GOP primary, while Karofsky got about 70,000 less than were cast in the Democratic primary. The Democratic primary race was at least marginally contested as of April 7 (Bernie Sanders dropped out the following day — perhaps he stayed in at least partially to help Democratic turnout in Wisconsin). The Republican presidential primary has essentially been uncontested the whole cycle.

In other words, the late controversy threw some doubt in the race, but the Democrats’ inherent advantage because of the contested presidential primary (and the uncontested Republican one) ended up manifesting itself in the result to at least some degree.

It is also possible that the very controversy over holding the election fired up Democrats to vote — in other words, accusations of voter suppression by Democrats against Republicans might have persuaded swing voters to pick the Democratic-backed candidate or pushed more Democrats to show up and vote to spite efforts they believe were designed to prevent them from voting. It’s hard to prove that this was the case, but it’s certainly possible.

As Election Day approached, many observers were expecting a result that was akin to the 2019 Supreme Court race. Republican-backed judge Brian Hagedorn won an open seat by fewer than 6,000 votes over the Democrats’ choice, Lisa Neubauer. Though it was a roughly 50-50 result, several key differences were apparent from the 2016 presidential result, which also was a very close race (Map 1). 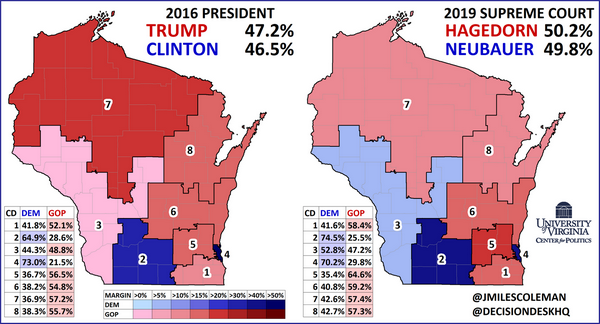 In 2016, after it had gone for Barack Obama twice by double-digits, Trump flipped the 3rd Congressional District, in western Wisconsin, by 4.5 percentage points. Neubauer, three years later, carried WI-3 by nearly six points. So why did Neubauer come up short? Hillary Clinton held up comparatively well in the Milwaukee suburbs; she came within 20 points in WI-5, historically the heart of the GOP’s coalition in the state. But Neubauer’s deficit in WI-5 was a nearly 65%-35% spread. In other words, the currents on either side of the state essentially canceled each other out, and the result was another frustratingly narrow loss for Democrats.

Given Wisconsin’s perennially purple hue and the strange circumstances that the election was held under, another close result seemed to be in the cards. But that’s not what happened.

On election night, the result looked something more like Sen. Tammy Baldwin’s (D-WI) 11-point reelection in 2018 — a landslide, by state standards. With the exception of the Milwaukee area’s Racine County, Karofsky carried all the same counties that Baldwin did. Breaking the races down by congressional district, there are almost no differences (Map 2). 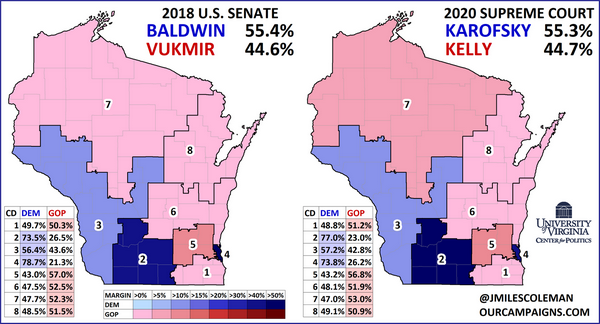 Both Baldwin and Karofsky carried WI-3 by nearly 15 percentage points. Given some of the recent statewide and judicial results there, Trump’s 2016 strength in the area is looking like something of an aberration; regardless, this area will certainly be hotly contested in the fall. It speaks to the strength of the Republican-drawn gerrymander that both their candidates took less than 45% of the vote in these elections but held five of eight congressional districts — though it helps that GOP strength is naturally more evenly-dispersed throughout the state.

The loyalty that Madison’s Dane County shows to Democrats continues to be intense. In the past three court elections, Democratic-aligned candidates took between 79% and 82% of the vote there — for context, in 2008, Barack Obama carried the state by 14 percentage points but took less than 74% of the (two-party) vote there. Dane County, the centerpiece of WI-2, powered Karofsky’s better-than 3:1 margin in that district.

Both Democratic-aligned candidates from Map 2 ran especially well in the 5th District. The electoral tides in one community there, Wauwatosa, illustrates this well. This suburb of Milwaukee County served as a launching pad for former GOP Gov. Scott Walker’s career, but supported Baldwin by 26 percentage points, 63%-37%, in 2018. A few months later, in April 2019, the liberal margin dropped by more than half, as Neubauer carried it 56%-44%. This week, Karofsky claimed 66% of the vote in Wauwatosa. In 2019, the city cast 13,000 votes but that was up to 19,000 this week, a 46% increase, despite the pandemic. That jump may have been driven, in part, by a contested mayoral race — perhaps a reminder that elections don’t happen in a vacuum and that we should use some caution in applying this election’s dynamics to other contests.

Still, looking to the short-term, we’re sticking by our rating of Safe Republican for the 7th District; this currently vacant northern seat will hold a special election on May 12. Even in a statewide rout, and with the added veneer of nonpartisanship, Karofsky took 47% in WI-7, which was actually a slight decline from Baldwin’s showing. There are promising signs for Democrats in pockets of the district, though. St. Croix County, on the Minnesota border, seems to be voting increasingly like a suburban county (the Twin Cities are located just a few miles west). Other than Florence County — a small rural county — St. Croix saw the largest percentage turnout increase from the 2019 Supreme Court race. As it cast 54% more votes this year, Kelly’s 50.6% share was down noticeably from Hagedorn’s 55.3%.

Going into the 2019 court race, Democrats had reason to feel bullish — they just ousted their longtime rival, Gov. Walker, and swept every other statewide office — and conventional wisdom seemed to back them up. If the liberal candidate won the seat contested that year, the conservative majority on the court could have potentially been in jeopardy. Perhaps sensing that, conservatives mobilized and beat expectations. This year, Democrats, recalling that stinging loss in 2019, were clearly more enthusiastic — their presidential primary, though not very competitive by that point, also was a key driver. While partisan interest in Wisconsin court races may follow these volatile sequences, one sure bet is that presidential races will always generate the greatest turnout on both sides.

With that, we wouldn’t use these results to suggest much about the fall. Turnout in the fall will be much higher: 2.98 million votes were cast for president in 2016, so the electorate will probably be double the size of this one, give or take (and of course there are caveats about the pandemic’s impact on turnout in November — the bitter battle over the date of the primary in Wisconsin may provide a preview of some of the conflicts over voting to come this fall).