The University of Virginia Center for Politics is excited to name four resident scholars for the 2021-2022 academic year.

They are acclaimed journalist Jamelle Bouie; former Department of Homeland Security Cybersecurity and Infrastructure Security Agency Director Chris Krebs; former Virginia Del. David Ramadan; and political communications veteran and commentator Tara Setmayer. They will be working with the Center’s staff and students this academic year towards its goals of promoting the democratic process and creating an informed citizenry.

As resident scholars, they will participate as guest speakers for Center for Politics classes, participate as panelists for Center events, and work with Center staff to develop additional public programs throughout the academic year. 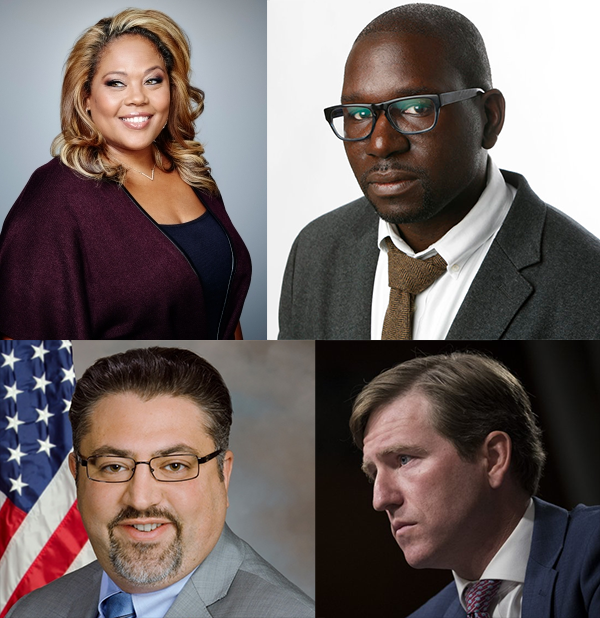 Jamelle Bouie is an opinion columnist for the New York Times and political analyst for CBS News. He previously served as chief political correspondent for Slate magazine. His insights on the impact of race in politics have been instrumental in driving national discourse. In 2013, Bouie contributed to the Center’s book Barack Obama and the New America: The 2012 Election and the Changing Face of Politics. He is a University of Virginia graduate.

Christopher Krebs is a founding partner of the Krebs Stamos Group and previously served as the first director of the federal Cybersecurity and Infrastructure Security Agency (CISA). As director, Krebs oversaw CISA’s efforts to manage risk to the nation’s businesses and government agencies, bringing together partners to collectively defend against cyber and physical threats. At CISA, Krebs also pioneered the Rumor Control program, which was designed to counter disinformation campaigns. He is a University of Virginia graduate.

David Ramadan served in the Virginia House of Delegates from 2012 to 2016. He is an executive and international consultant with over 25 years of experience in business, government relations, leadership, management, marketing, communications, public policy, public relations, immigration, community affairs, legislative advocacy, grassroots, and minority engagement. David is an adjunct professor at George Mason University (his alma mater). He also served as a member of the George Mason University Board of Visitors.

Tara Setmayer is a sought-after political commentator and former communications director on Capitol Hill. She regularly appears on CNN’s primetime programs and contributes to ABC’s The View, Good Morning America, and Nightline. She’s also made numerous appearances on HBO’s Real Time with Bill Maher. Vulture.com recognized her as one of 2016’s “Top 20 Election Coverage Stars” on TV. She is the host of the Center for Politics’ recent three-part documentary, Dismantling Democracy, which is available on Amazon Prime.