Politics Is Everything Podcast 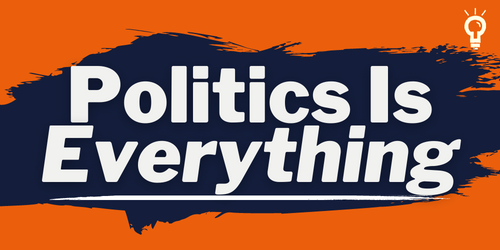 Democracy faces a wide range of pressing challenges – from extreme partisanship and divisive politics to persistent inequities in access, voice and participation in public institutions and decision-making processes, from civic unrest to institutions that aren’t responsive to public needs. It’s not enough to just identify problems, we also have to find solutions and work collectively to address them.

Politics Is Everything is a member of the Democracy Group and hosted by Kyle Kondik, Carah Ong Whaley, and other members of the Center for Politics team.

Listen to Politics Is Everything on:

On Friday, September 23, the Center for Politics honored and recognized all of the police officers, state troopers, national guard, firefighters, and emergency responders who protected members of the U.S. Congress, their staff, journalists and other public servants at the Capitol on January 6, 2021 as the legislative branch of America’s democracy carried out the Constitutionally prescribed certification of the results of the 2020 presidential election.

In this episode, we talk with one of the recipients of the award, U.S. Capitol Police Sergeant Aquilino Gonell. Sergeant Gonell served in Iraq with the U.S. Army during Operation Iraqi Freedom. Even with the threat of bomb-filled roads, he volunteered to conduct supply missions for U.S. and allied forces and local Iraqi schools. On January 6, 2021 while on American soil, he said he was more afraid of the violence that took place at the Capitol than he ever felt while serving in Iraq. On the west side of the Capitol, he spent hours trying to stop the wave of assailants from entering the building. He was hit with an American flag pole and a bat, and at one point fell to the ground and was dragged by a group that beat and insulted him.

“I had to work for my citizenship. I had to earn my citizenship. Having so many people who were born in this country attacking the very same thing I swore an oath to protect and attacking the place I call home, that is what bothers me so much,” Sergeant Gonell tells us. “I bought into the American system, into American values. The things we hear when we live overseas – that America is the land of opportunity, that everyone is treated equal, that no one is above the law. And all this was tested on January 6 and onward… Without what we did, there would have been a lot of people who died. It would have been a massacre. When they were trying to get into the Capitol, they were telling us that they were there to hurt people. They told me that they were going to execute anyone in there that deserves it. Some of them yelled at me that I wasn’t an American…but, what is more American than protecting the Capitol?”

Ep. 11 Why Is the U.S. Constitution in Jeopardy

Activists have been campaigning behind the scenes for years now to change the U.S. Constitution to limit the federal government, with implications for education, health care and the environment. In this episode, we talk with former Senator Russ Feingold, President of the American Constitution Society, and Peter Prindiville, a non-resident fellow at the Stanford Constitutional Law Center about their new book, The Constitution in Jeopardy.

Feingold and Prindiville trace the origins and developments of Article V of the U.S. Constitution and its provision and the ways in which it embodies an underappreciated tension that the Constitution both reflected and embedded between institutionalist theories of democracy and governance and more radical grassroots theories of resistance and change. They caution that a Constitutional Convention could run away and fundamentally alter our nation’s laws and civic life.

Ep. 10 What Is the Role of the News Media in this Critical Moment for American Democracy?

Robert Costa, chief election and campaign correspondent for CBS News and a scholar at the Center for Politics this academic year, shares his approach to covering campaigns, elections and politics to help the public make sense of the complex issues facing the nation. “It can become a blizzard that’s hard to follow,” says Costa, “You have to report deeply and you want to break news…Unless it’s breaking ground on the biggest players, it’s important, but not THE story.”

Ep. 9: Are Republican Chances for the Midterm Underrated?

There’s been some mixed electoral indicators – including the recent rise in President Biden’s job approval rating and Democrats doing better in the generic ballot – that are making the 2022 elections more challenging to analyze. Henry Olsen, Senior Fellow at the Ethics and Public Policy Center and Washington Post columnist joins us to discuss why the Republicans are now being underrated, including through persistent and unaddressed biases in survey research, and what that means for the 2022 elections. “We should be very careful when we’re looking at state-level polling,” says Olsen.

Ep. 8: House Ratings: ‘What the Hell’s Going On Out Here?

Kyle Kondik, Managing Editor of Sabato’s Crystal Ball at the Center for Politics, talks about redistricting, the special election in Alaska and new ratings for House of Representative seats.

Ep. 7: Where Have Trump’s Endorsements Mattered and Why? ft. Leah Askarinam

In August, Representative Liz Cheney (R-WY) became the seventh House Republican to fall to a Donald Trump-backed challenger since 2018. Rep. Cheney has taken a prominent role in calling for accountability for the January 6, 2021 insurrection and calling out false election narratives. In this episode, we talk with Leah Askarinam, senior editor at Grid News, about the extent to which and where have Mr. Trump’s endorsements mattered in the 2022 election and why. “Trump undoubtedly is the most important endorser in the Republican Party, but even that has its limits,” says Askarinam.  Askarinam also discusses the role of candidate quality, the impact of the Dobbs decision, the economy and other issues and why this might not be a typical midterm election year.

Before joining Grid, Leah was co-author of the On Politics newsletter for the New York Times and editor in chief of National Journal’s Hotline.

Ep. 6: How Has the Political Environment Changed & What Does It Portend for Senate Races?

In Sabato’s Crystal Ball this week, Kyle Kondik and J. Miles Coleman write that Democrats are hoping to make the 2022 election more of a choice than a referendum and that they are benefiting from some damaged Republican candidates in several key races as well as the emergence of abortion as a key issue in the aftermath of the Supreme Court’s Dobbs decision. In this episode, they discuss how the political environment has changed and what it portends for Senate races.

Ep. 5: What would American democracy look like if everyone participated?

Americans turned out to vote in record numbers in the 2020 presidential election and turnout has been on the rise in other recent elections. However, voter turnout in the United States still lags behind other countries. In this episode, we discuss 100% Democracy:  The Case for Universal Voting with co-authors Miles Rapoport, executive director of 100% Democracy: An Initiative for Universal Voting and the Senior Practice Fellow in American Democracy at the Ash Center for Democratic Governance and Innovation at the Harvard Kennedy School, and E.J. Dionne, Jr. senior fellow at the Brookings Institution, a syndicated columnist for the Washington Post, university professor at Georgetown University, and visiting professor at Harvard University.

Universal voting is in effect in 26 democratic countries in Europe, Latin America, Asia. Most notably, Australia adopted nationwide mandatory voting almost 100 years ago, in 1924. The participation rate immediately jumped from 60% to 90% and has stayed there in almost every election since.

Rapoport and Dionne make the case that universal civic-duty voting would make the voting electorate more fully representative of the universe of American citizens and that campaigns would significantly improve, since candidates and parties would have to appeal to all voters. “When the electorate is fully reflective of the population as a whole, the responsiveness of government is likely to increase,” Rapoport says during our conversation. Instead of the “enrage to engage” that comes with great cost to our democracy, universal voting “would almost certainly produce a less ideological electorate,” says Dionne. The implementation of universal voting could also significantly improve civic culture in the United States.

Links in this Episode:

In the lead up to the 2020 election, the Pew Research Center asked voters whether they would split their ticket, that is to select a Republican for one office and a Democrat for another. Just 4% of registered voters said they would do so. Less than four percent of members of the House of Representatives (16 of 435) represent districts that voted for the opposing party’s presidential nominee in 2020. At the state level, 90 percent of state Senate and state House districts around the country voted for the same party for president as they did for the legislature. In 2022, six states – Alabama, Indiana, Kentucky, Michigan, Oklahoma and South Carolina – will offer voters the opportunity to choose a party’s entire slate of candidates with just a single ballot mark in general elections that applies to all partisan offices on the ticket, including federal, state and local races.

There has been a precipitous decline in voters who split their ballots as the political parties have sorted ideologically and sharpened their differences over issues and policies. Despite this trend, J. Miles Coleman discusses which states that have elections in 2022 for senate and governor might see split outcomes and why.

Ep. 3 Can We Fix the Rage Machine?

Tim Miller is an MSNBC analyst, writer-at-large at The Bulwark, and the host of “Not My Party” on Snapchat. Tim was communications director for Jeb Bush’s 2016 presidential campaign and spokesman for the Republican National Committee during Mitt Romney’s 2012 campaign. He has since left the GOP and become one of the leaders of the “Never Trump” movement. He is author of Why We Did It: A Travelogue from the Republican Road to Hell

that aims to explain why Washington DC politicos who knew better went along with Trump and he joins us on Politics is Everything to discuss his book and what we can do to fix the rage machine he helped to create.

The president’s party has lost governorships in 16 of the 19 midterm elections since World War II. In this episode, Kyle Kondik, Managing Editor of Sabato’s Crystal Ball discusses the most competitive gubernatorial races in 2022. He shares how a variety of factors – including presidential approval, incumbency, the state of economy and other issues, the year in which gubernatorial elections are held – converge to shape the outcome of gubernatorial elections.

The difference in experience among Senate candidates is one of the story lines Kyle Kondik, Managing Editor of Sabato’s Crystal Ball, is following in the 2022 midterm elections. As a group, Republican Senate (and gubernatorial) candidates have less experience running for office and winning general elections than do Democratic candidates. How will experience and candidate quality impact election outcomes?

Also in this episode, Ahmed, a student who participated in the Center’s Global Perspectives in Democracy Program, shares about his experience in the United States this summer and his views on democracy in Iraq.