The Center for Politics at the University of Virginia will honor the service of U.S. Capitol Police and D.C. Metropolitan Police officers who defended the U.S. Capitol on Jan. 6, 2021 with the presentation of the Center’s first annual “Defender of Democracy” award.

This year’s inaugural award recipients will be Private First Class Harry A. Dunn, Officer Caroline Edwards, Officer Michael Fanone, Sergeant Aquilino Gonell, Private First Class Eugene Goodman, Officer Daniel Hodges, Private First Class Howard Liebengood (posthumously), Officer Jeffrey Smith (posthumously) and Private First Class Brian Sicknick (posthumously). An awards ceremony will take place in the Rotunda Dome Room from noon to 1:30 p.m. on Friday, Sept. 23. Following the ceremony, the officers and widows of the fallen officers will participate in a special panel discussion about the events of Jan. 6, 2021. Sen. Tim Kaine (D-VA) will give closing remarks at the conclusion of the event. Doors open at 11:45 a.m. The event is free and open to the public with advanced registration, and members of the media are welcome to attend. The event will also be livestreamed here.

“The events of January 6th must serve as a constant reminder to everyone that even a strong democracy like ours can find itself under siege,” said Larry J. Sabato, Director of the Center for Politics. “Had it not been for the actions of these dedicated officers and others like them who refused to yield to the violent mob invading the Capitol, we might be living in a very different country today. They are defenders of democracy in every sense, and they have given every American more than any award could ever reflect.”

More than 100 officers were injured in the Jan. 6, 2021 attacks. A bipartisan Senate report found that at least seven people had lost their lives in connection with the insurrection, including at least four police officers who died by suicide in the months after they responded to the attack. As of September 2022, at least 910 people have been charged with federal crimes related to the attack on the Capitol.

Despite the challenges of being in the public sphere, Officers Harry Dunn, Caroline Edwards, Michael Fanone, Aquilino Gonell, Eugene Goodman, and Daniel Hodges have testified and spoken out publicly, along with the partners of fallen Officers Howard Liebengood, Brian Sicknick, and Jeffrey Smith. All these extraordinary individuals remain committed to seeking justice and accountability in order to prevent future violence and to confront rising attacks on the American electoral process.

About the award recipients:

Harry A. Dunn joined the U.S. Capitol Police (“USCP”) in 2008 and since 2011 has served at the officer rank as a Private First Class (“PFC”). PFC Dunn has received several awards and commendations for his exemplary service in the USCP, including the Capitol Police Service Medal, the Capitol Police Achievement Medal, and a commendation for interdicting an individual in possession of a firearm who was attempting to enter the Capitol.

Caroline Edwards is a U.S. Capitol Police officer who began her law enforcement career in 2017 after leaving a public relations career “to answer the call to serve.” She was assigned to the first responder unit on Jan. 6, 2021. According to the House of Representatives Select Committee investigating the attacks on the U.S. Capitol, Officer Edwards was the first law enforcement officer injured by the rioters. Even after suffering a traumatic brain injury, Officer Edwards patrolled the Capitol’s West Plaza and prevented many rioters from entering the Capitol building.

Michael Fanone served as a Metropolitan Police Department Officer assigned to the First District for 20 years. Working briefly as a patrol officer and then spending the majority of his career as a vice investigator in various small mission units, Fanone participated in over 2,000 arrests for violent crimes and narcotics trafficking, served as a special task force officer for the FBI, ATF, and DEA, and earned more than three dozen commendations for his work. Fanone currently serves as an analyst for CNN, a security consultant, and a firearms instructor.

Aquilino Gonell joined the U.S. Army and in 2004 was sent to Iraq. He joined the Capitol Police Department in 2006. On Jan. 6, 2021, he spent hours on the west side of the Capitol trying to stop the wave of assailants from entering the building. He was hit with an American flag pole and a bat, and at one point fell to the ground and was dragged by a group that beat and insulted him. Since the attack, he’s undergone surgery on his right foot and his left shoulder, which he still is unable to rotate. Sergeant Gonell has testified in some of the court cases of individuals charged with federal crimes related to the Capitol riot, and he is helping authorities on the investigations.

Eugene Goodman is a U.S. Capitol Police Officer and a former Army infantryman who served in Iraq. In a video of the Jan. 6, 2021 attacks, Officer Goodman, who left his gun in his holster, can be seen leading a mob of Trump supporters away from the door leading to the Senate floor as they attempted to prevent the certification of the 2020 presidential election. By diverting the mob up a flight of stairs, he provided time for lawmakers and former Vice President Mike Pence to reach secure parts of the complex. Another video depicts Officer Goodman running down a Capitol hallway and warning Senator Mitt Romney (R-UT) to head in the other direction to escape the rioters.

Daniel Hodges joined the Washington D.C. Metropolitan Police Department in 2014. He was assigned to and continues to be in patrol in the Fourth District. On Jan. 6, 2021, Officer Hodges responded with CDU 42 to the attacks on the U.S. Capitol as Capitol Police units were overrun. Officer Hodges fought the terrorists assaulting the Capitol on the west lawn, the west terrace, and in the tunnel leading out to the inaugural platform, sustaining many injuries in the process. While fighting in the tunnel he was crushed by rioters in the west terrace doors of the Capitol and beaten. He returned to full duty within a month and continues to serve as an officer.

Howard C. Liebengood was a 15-year veteran of the U.S. Capitol Police. PFC Liebengood died by suicide on Jan. 9, 2021 and his death was a direct result of the trauma and strain from the events of Jan. 6 and the unremitting schedule on the ensuing days. During PFC Liebengood’s tenure at USCP, he received many commendations for outstanding service. He served as a representative for the USCP Senate Division Community Outreach Program. In this capacity, PFC Liebengood spoke to public school children about the importance of following rules and making good decisions through his program, “Racing to Live by the Rules,” for which he received a commendation. He also conducted active shooter classes for Senate staffers which were widely attended and praised.

Brian D. Sicknick served with the United States Capitol Police from July 2008 until his passing in the line of duty on Jan. 7, 2021 due to injuries sustained during the attack on the United States Capitol on Jan. 6, 2021. PFC Sicknick spent the majority of his career with the department’s First Responder Unit, where he served as a mountain bike officer as well as a member of the Civil Disturbance Unit. As a member of the First Responder Unit, he was responsible for law enforcement operations in and around Capitol Square. For his achievements and service, PFC Sicknick was the recipient of numerous departmental awards including the Blue Badge Medal, USCP Commendation Ribbon and the USCP Unit Citation. 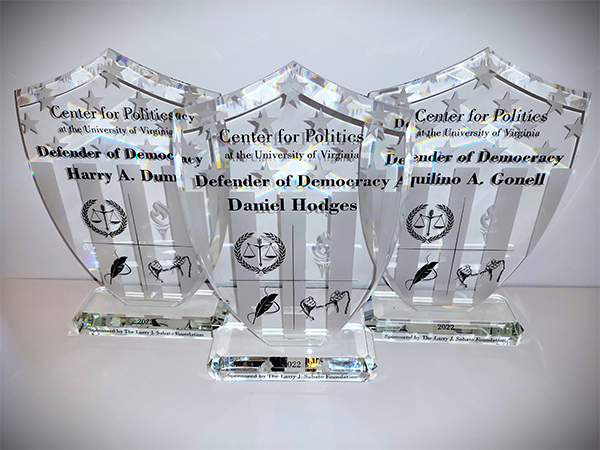 Each award is sculpted in the shape of a shield symbolizing vigilance as well as service to others. The award also features etched stars and stripes along with four symbols representing core values central to self-governance: freedom, justice, equality, and knowledge. Fashioned entirely of clear glass, the medium was selected to evoke democratic principles of truth and transparency while its subtle reflective qualities also encourage viewers to find themselves among the values the award represents. The Center for Politics at the University of Virginia established the Defender of Democracy award in 2022 with special project funding provided by the Larry J. Sabato Foundation.