(CHARLOTTESVILLE, VA) – The Center for Politics at UVA announced a lineup of nine prominent journalists, public servants, and political practitioners who will serve as CFP Scholars for the 2022-2023 academic year. The CFP Scholars will teach and mentor students; offer timely analysis of political events; host unique student workshops; and assist Center for Politics faculty and staff in developing and presenting timely and topical public programming throughout the coming fall and spring semesters. 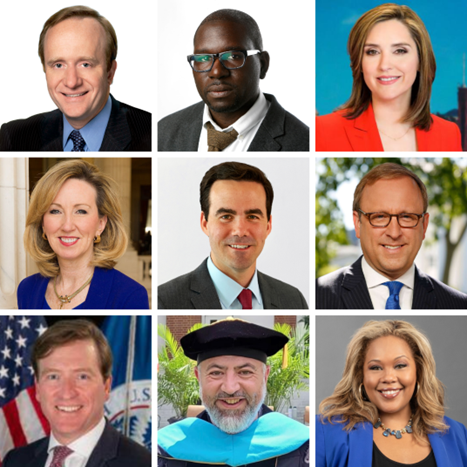 “The Center for Politics prides itself on featuring top-flight, influential professionals who can help our students and the broader community better understand the realities of American politics,” said Larry J. Sabato, director of the Center for Politics at UVA. “Each of our Scholars is highly accomplished and will offer unique insights and perspectives that stem directly from their extensive first-hand experiences in the world of politics. We’re delighted to have them with us at the Center for Politics and look forward to an exciting academic year.”

Here is more information on the Center for Politics’ nine 2022-2023 scholars:

Paul Begala is a political contributor for CNN, where he is part of the political team that has won both an Emmy Award and a Peabody Award. In addition to appearing on-air, Paul writes commentary for CNN.com. Begala is the author of six books about politics, several of which were New York Times bestsellers. Begala burst on the political scene in 1992 as a senior strategist for Bill Clinton’s presidential campaign. He served as Counselor to the President in the White House, helping coordinate policy, politics, and media.

Jamelle Bouie is a columnist for the New York Times Opinion section where he covers politics, history, and culture. He’s based in Charlottesville, Virginia. He is a University of Virginia graduate.

Margaret Brennan became moderator of Face the Nation on CBS News in February 2018 and quickly became known for her tough but fair questioning of world leaders, politicians, and policy makers. She brings to her coverage of domestic politics an extensive background in national security and financial news. She joined CBS News in 2012 and has held roles including State Department and White House Correspondent. Brennan is also CBS News’s chief foreign affairs correspondent. She is a University of Virginia graduate.

The Honorable Barbara Comstock brings years of experience at both the state and federal levels. In 2009, voters in northern Virginia sent Comstock to the House of Delegates. In 2014, she won election to the Tenth Congressional District, which she represented for two terms. She was named as one of the “Top Ten Most Effective Lawmakers” in the 115th Congress by the Center for Effective Lawmaking, a joint effort of the University of Virginia and Vanderbilt University. An advocate for women in politics, she established the Barbara Comstock Program for Women in Leadership, which is housed at George Mason University. She currently serves as senior advisor at the law firm of Baker Donelson.

Robert Costa is the Chief Election & Campaign Correspondent for CBS News, where he covers national politics and American democracy. Before joining CBS News in 2022, Costa and legendary journalist Bob Woodward co-wrote Peril, which documented the tumultuous transition between the Trump presidency and the Biden presidency and was a #1 New York Times bestseller. From 2014 to 2021, Costa was a national political reporter at the Washington Post, and he also was the moderator and managing editor of Washington Week on PBS from 2017 to 2020.

Christopher Krebs is former Director of the federal Department of Homeland Security’s Cybersecurity and Infrastructure Security Agency and helped secure the 2020 election. He was fired in November 2020 after CISA declared in a statement that the 2020 election was the most secure in America’s history. He and former Facebook Chief Security Officer Alex Stamos co-founded and head the Krebs Stamos Group, a cybersecurity consultancy. He is a University of Virginia graduate.

The Honorable David Ramadan, Ed.D., served in the Virginia House of Delegates from 2012 to 2016. He is an executive and international consultant with over 25 years of experience in business, government, grassroots, higher education, immigration, leadership, legislative advocacy, management, minority engagement, public policy, and public relations. Ramadan is the Vice President of an innovative EdTech leader, Noodle, the world’s fastest-growing online and lifelong knowledge network of universities, corporations, and learners. Ramadan is an adjunct professor at George Mason University (his alma mater). He also served as a member of the George Mason University Board of Visitors, appointed by the Governor of Virginia.

Tara Setmayer is a Senior Adviser for the Lincoln Project, a leading pro-democracy organization dedicated to the preservation, protection and defense of democratic norms, institutions and ideals. Setmayer is an ABC News Political Contributor and appears regularly on national cable news programs, where she brings a fresh perspective to the politics of the day with her signature “tell it like it is” style. After the 2016 election, Vulture.com named her one of that cycle’s Top 20 Election Coverage Stars. Before becoming a recurring figure in national media, Setmayer was a longtime Communications Director on Capitol Hill. In collaboration with the Center for Politics, she narrated the Emmy nominated 3-part documentary, Dismantling Democracy.