— There is no systematic relationship between the turnout rate and the Democratic Party’s (or the Republican Party’s) share of the two-party congressional vote.

— A model based on history and the dynamics of surge and decline suggests Republicans should lose House seats, but they remain well-positioned to hold the House majority. However, certain factors not included in the model, like a new House map in Pennsylvania and a high number of Republican retirements, could cause the model to understate GOP exposure in the House.

Probably not. The empirical fact is that turnout does not display a systematic bias in American national elections, despite the typically lower turnout rate of Democratic partisans and the greater effort by Democratic campaigns to get out the vote. Two more powerful influences are: (1) the incumbent president’s job approval and (2) how many members of Congress are holding seats for which they are a bad “fit.” So what do those factors portend for 2018? Contrary to the “turnout wisdom,” models using these contextual factors dominate turnout effects and predict that the Republicans will still be in charge next year, albeit with a reduced majority in the House. 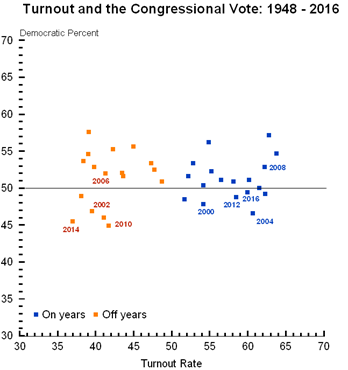 As demonstrated in the preceding figure, for both on- and off-year elections there is no systematic relationship between the turnout rate and the Democratic Party’s (or the Republican Party’s) share of the two-party congressional vote. During the decades when the Democrats consistently controlled Congress, the size of their majorities did not increase with the turnout rate in either high turnout presidential elections or lower turnout midterm elections. The vote share did respond to the presidential contest:The Democratic vote tended to decline when the Republican won the presidential contest regardless of the turnout rate; correspondingly, the Democratic share of the House vote increased when Democratic candidates carried the presidential race. The bottom line is that there is a nearly circular joint distribution of turnout and the party vote in both on- and off-years, which is as illustrative of no correlation as one can imagine.

The point can be pressed further by examining the relationship between the vote and turnout within all 435 congressional districts (which we did, but do not present here due to space limitations). We examined the relationship during four eras when the districts were constant: the 1970s, 1980s, 1990s, and between 2002 and 2010. What we found is a distribution of regression slopes that measured the relationship between turnout and the vote that was almost symmetrically distributed around the zero point. Put another way, the vote varied positively within some districts and negatively within others. Sometimes turnout seemed to increase the Republican vote, and sometimes it seems to drive more Democratic votes. Most of the slopes, however, were small and usually statistically insignificant (based as they were on five elections). Interestingly, consistent with the point made above about the influence of the presidential contest, the distribution tended to show a Democratic tilt when Democrats were winning the presidential races during the decade but it tilted in the GOP direction when the Republican presidential candidates were winning most of the presidential elections of the decade. The bottom line again: we were unable to find any consistent tendency for one party to profit with high turnout. Turnout oscillation can work on behalf of either party as we explain in detail in our just-completed book manuscript, Turnout and Partisan Vote Choice in American Elections.

Surge in the presidential year

If turnout is not a systematic factor, what is? Angus Campbell wrote about the linkage between off-year congressional seat losses and the seat surge of presidential elections almost 60 years ago. His observation provided an answer to the question of why the president’s party is almost certain to lose congressional seats in the off year, but especially in his first midterm election. The following figures update the basic pattern.

Campbell’s insight was very straightforward: the winning presidential candidate’s coattails pulled into office co-partisans who were not necessarily a good fit for their districts. Coattails may be a bit weaker than they were in the past, but they have not disappeared as viewed from the perspective of the vote share or the number of seats won by the winning presidential candidate’s party. The weakness in coattails — if there is a weakness, and the question has not been carefully studied — may reflect the increasing effectiveness of district line-drawing over the past few decades because the vote shares continue to vary with the president’s vote share even more strongly than the seat victories. 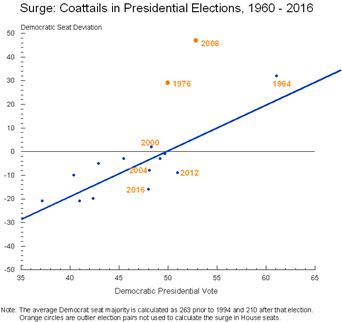 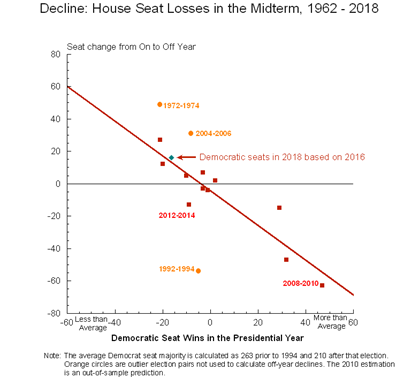 Decline in the midterm year

As Campbell and subsequent scholars noted, most of these poor-fit incumbents were defeated in the election that immediately followed the presidential election that swept them into office; ergo, the off-year losses. Some elections have unusual surges (1976 and 2008), but they mostly track the presidential margin. The pattern yields a straightforward Off-Year Rule: The more you won, the more you will lose. The “decline” figure above shows this clearly. Consider the outcome in 2010 following the big Democratic surge in 2008 (the lower right corner). The figure also illustrates what losses the Republicans should expect given the complete absence of a Trump-induced surge in 2016: Republicans lost six net House seats in the last election. If only surge and decline dynamics were at work, the Democrats should expect to pick up slightly less than 20 seats, per the historical pattern. 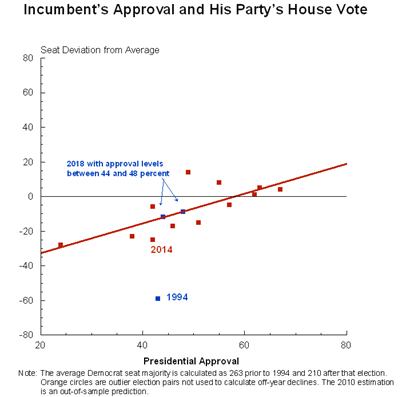 But satisfaction with the president’s performance also matters, as the preceding data document. The off-year election is a retrospective judgment on the domestic political order, the economy, foreign affairs, and malfeasance by the president and/or the president’s appointees during the time he has been in office. When the population approves, his party fares well at the ballot. Otherwise, it suffers.

On average, Trump’s approval numbers during October 2018 have varied from a low of about 43% to a high of 49% (depending on what assumptions one makes about missing data, especially non-responses). While Trump’s ratings are not terribly impressive, if presidential approval were all that were at work, GOP seat losses in 2018 should be fewer than 20.

Based on the historical pattern and the dynamics of surge and decline, the Republicans are almost certainly going to lose seats in the House (the Senate is more complicated and not addressed here). Based on the historical trends, however, they are not likely to lose anywhere near as many as the commentariat was suggesting until recently (and we emphasize that this judgment does not address the turmoil surrounding the Brett Kavanaugh confirmation and related matters).

The preceding table summarizes the effect of turnout, surge and decline dynamics, and presidential approval on off-year elections from 1954 through 2014. The equations predict that the Republicans could lose as few as 11 and as many as 24 seats in 2018. These equations do not take into account other factors such as the redistricting of Pennsylvania or the relatively large number of GOP retirements, both of which will certainly cause Republican losses. However, the basic dynamics do not predict anything like the massive losses various experts have been suggesting, and turnout will not be influential if the past is prologue. The fundamental factors that will shape 2018 are short-term forces manifest in presidential approval and a few structural factors (the magnitude of the Trump “non-surge” in 2016). If the Democrats over-achieve compared to our equations, it will almost certainly not be due to an unexpectedly high turnout. Rather, it will be because of political winds that Trump’s approval numbers have not captured, GOP retirements and events such as the Pennsylvania redistricting.