A simple map of House gains in November 2010 is quite revealing. 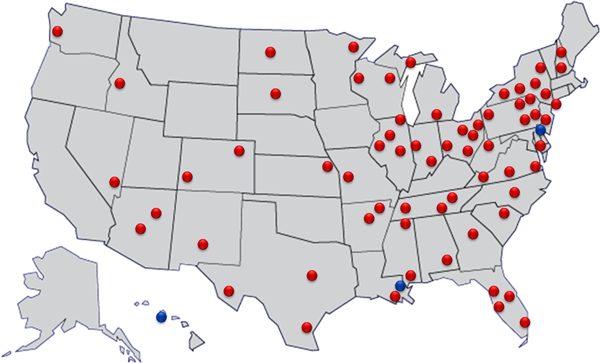 Every red dot represents a Republican pick-up (66 in all). The three blue dots are the sum total of Democratic takeovers in GOP districts (Delaware-AL, Louisiana-2, and Hawaii-1). The net Republican gain appears to settling in at 63. Thirty-three states gave the GOP at least one additional seat.

The Election Day “wave” for the Republicans produced a bumper crop of 23 new seats in the South and Border States, where the GOP traditionally does well. This region accounted for more than a third of total Republican gains.

But the key to the Republican House takeover occurred in the North Central states through the industrial Midwest. Pennsylvania (5), Ohio (5), and most surprisingly, New York (6) and Illinois (4) joined Indiana (2), Maryland (1), Michigan (2), Minnesota (1), New Hampshire (2), and New Jersey (1) in shifting a regional total of 29 to the GOP.

A good deal of this is simply a restoration of the pre-2006 status quo. Republicans lost some previously safe seats in the Democratic years of 2006 and 2008, and what goes around, comes around. Take New York state. Despite Democratic landslides for governor and both U.S. Senate seats in 2010, Republicans managed much-needed victories in districts they had long controlled. After all, the GOP’s recent failures in the Empire State had left the party with a mere two House seats out of 29, and they had nowhere to go but up. In fact, Republicans had never been this bereft of seats in New York since the formation of the GOP in the 1850s.

The sparsely populated states of the Farm Belt and the Rocky Mountain area added 9 more seats to the Republican total. At long last, for instance, both Dakota representatives were elected from the Republican column, the first time the GOP has captured all the Dakota U.S. House seats since 1976. (At that time South Dakota still had two U.S. representatives.)

The other side of the equation can be seen in the Pacific Coast states (Alaska, California, Hawaii, Oregon, and Washington). Despite the Red wave sweeping America, the net House gain for the GOP in these five states was zero (+1 in Washington and -1 in Hawaii). The Pacific states of California, Oregon, and Washington have become a Blue sandbar that can withstand even a Republican tsunami. Strong GOP candidates for Governor in Oregon and California were defeated. Credible Republican Senate contenders in California and Washington could not oust Democratic incumbents. With 53 House berths, not a single Golden State seat changed party hands.

Back in 1994, the last GOP landslide year, Republicans picked up three seats in California. The story is worse for Republicans in Washington State, which was ground zero for the GOP in 1994, when the party won six House seats and held their Senate seat too. All the state’s House seats save one were impervious to a Red tide this time around.

Regional polarization is once again a fixture in American politics, even in years that are overwhelmingly tilted to one party.