Speaking at the 2004 Democratic National Convention, Barack Obama, then a candidate for the U.S. Senate, famously declared that “there’s not a liberal America and a conservative America; there’s the United States of America.” Obama then went on to decry political pundits who “like to slice and dice our country into red states and blue states.” The implication of Obama’s speech was that the perception of geographic sorting of the country into reliably Democratic and Republican areas was not based in fact, but was instead a false narrative imposed by the media.

Obama’s rhetoric of unity and homogeneity across party lines notwithstanding, there is substantial evidence that cultural and lifestyle preferences are strongly related to political tastes. Political scientists have demonstrated that political ideology and party identification are predictive of choices in areas as varied as mate selection, media consumption, cleanliness, office décor, music tastes, and housing decisions. If such relationships between political and lifestyle preferences are strong enough, and individuals are sufficiently willing and able to “vote with their feet” and move to areas that are a better match for their tastes, the implication is clear: We should expect to see the emergence over time of a geographically divided electorate of exactly the kind that Obama’s famous speech in 2004 sought to deny.

Perhaps the most famous argument in support of such a geographically divided electorate can be found in Bill Bishop’s The Big Sort. In this account, Bishop points out that most Americans live in neighborhoods that are dominated by one political party and that this divide has been growing over time. The result has been a “fundamental kind of self-perpetuating, self-reinforcing social division” of Americans along geographic and partisan lines.

While an argument like Bishop’s is persuasive, there has been very little empirical examination of these claims. To understand both whether partisans sort into geographic locales and the degree to which this sorting takes place, Greg Martin and I analyzed two similar sources of data: The first contains information on the moving patterns of the nearly 1.1 million people who moved from one location to another within the state of Florida between 2008 and 2010; the second contains information on 50,000 individuals who moved from one state to another between 2005 and 2016. In both sets of data, we analyzed whether Democrats and Republicans have differential preferences over three distinct characteristics of a geographic locale: the log population density; the “walkability” of a neighborhood, measured by its closeness to restaurants, shops, offices, and parks; and, finally, the Republican share of the two-party vote. While the results we find hold across both of our samples, I only present results from our dataset of Florida movers here.

Given what we know about Democratic and Republican partisans, there are clear expectations about the sorts of patterns we should see if a “big sort” is, indeed, occurring: Democrats (Republicans) should prefer more (less) dense locales, more (less) walkable areas, and areas with a lower (higher) Republican share of the two-party vote. What we find is that Democrats and Republicans do prefer to live in areas with more co-partisans. For instance, registered Democrats moving from one location to another in Florida move, on average, to locations about 5 log points denser than observably comparable registered Republicans. Moreover, registered Democrats move to areas that, on average, have approximately 2% lower Republican vote shares than observably comparable Republicans. These results are shown graphically in Figure 1. 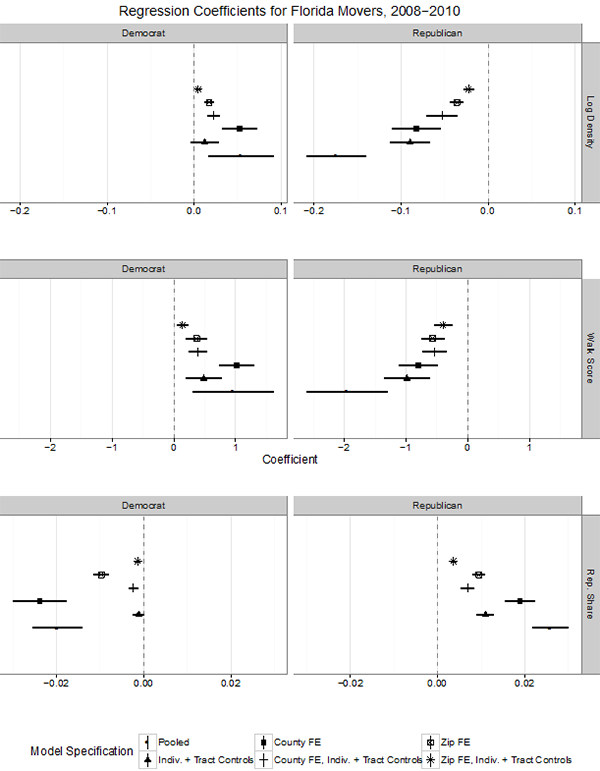 While these results suggest that there is a degree of partisan sorting along geographic lines taking place within the American electorate, the more important factors in determining patterns of migration are nonpolitical attributes of a location. Indeed, when we factor in characteristics of a neighborhood such as the racial, gender, and age demographics; income deciles; education levels; levels of home ownership in the area; and qualities of a house, such as the median number of rooms and the year it was built, the influence of partisanship in determining where an individual moves diminishes greatly. Americans, then, prefer to live near co-partisans, but this preference is a much lower priority than more practical considerations.

Given that our data suggest that partisanship is a very small factor in determining where an individual chooses to live, one interesting question is how long it would take to achieve a geographically polarized electorate like the kind we see in contemporary U.S. politics. Therefore, in order to answer this question, we simulated 20 years’ worth of moving in our data set of Florida movers. This simulation process consists of a few steps: First, we estimate the probability that every voter registered in Florida between 2008 and 2010 moves between 2008 and 2010; next, those individuals who are predicted to move relocate to a new precinct that better fits their own partisan preferences; after this, we recompute the Republican presidential vote and registration shares in every precinct once moving is complete. We repeat this process for a period of 20 years or, equivalently, 10 electoral cycles. After simulated each cycle, we record and plot the proportion of the Republican voter share and the Republican share of two-party registrations in each of Florida’s 25 congressional districts (based on the 2008 starting point; Florida has 27 districts following the 2010 reapportionment). These simulated changes are shown in Figures 2 and 3.

Note that we treat individuals’ presidential votes and registration choices as fixed; the only thing that may vary over time is their residential location. The statewide population of voters and hence statewide Republican shares are fixed throughout the course of the simulation. All that may potentially change is the composition of lower-level geographic units such as precincts or state house or congressional districts. 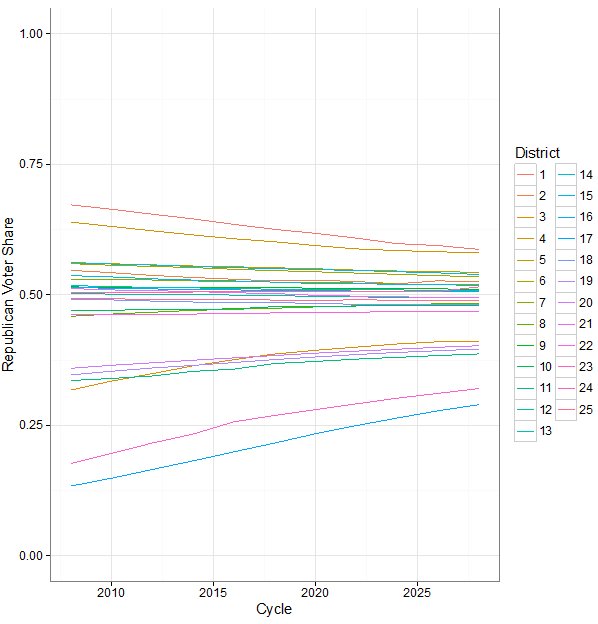 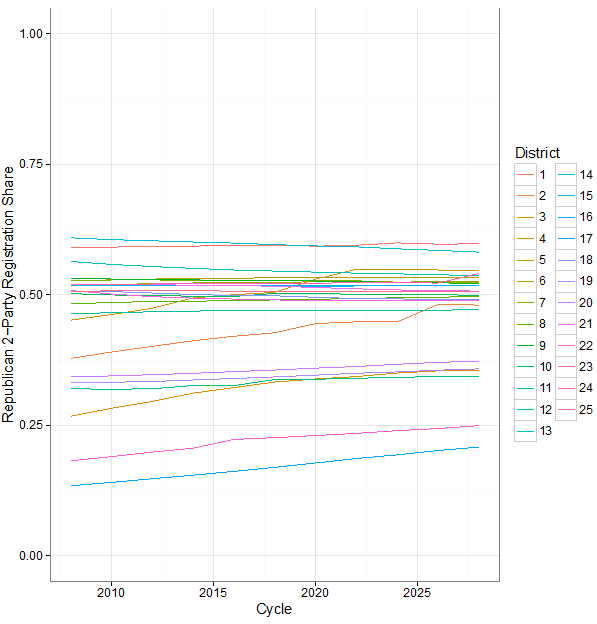 As can be seen in Figures 2 and 3, both the proportion of the Republican voter share and the Republican two-party registration share increases very little over time. In fact, any change that does occur tends to produce more competitive congressional districts rather than more districts that are dominated by one party. This is because, as we have suggested, Americans are more concerned with things like finding affordable homes in areas with good schools than living near other people who share their partisan affiliation. Given the estimates we have found in our analyses, it would take an extraordinarily long time — if ever — for geographic polarization along partisan lines to occur. This claim is shown clearly in Figures 4 and 5. Figure 4 shows the distribution of simulated 2008 Republican presidential vote share at the precinct level in each of the 10 simulation cycles. Figure 5 shows the distribution of two-party Republican registration shares at the precinct level over this same simulated time period. If geographic sorting was happening, we should see an increasingly bimodal distribution on both of these metrics. Instead, what we see is the emergence of more competitive precincts and the decline of more lopsided precincts. 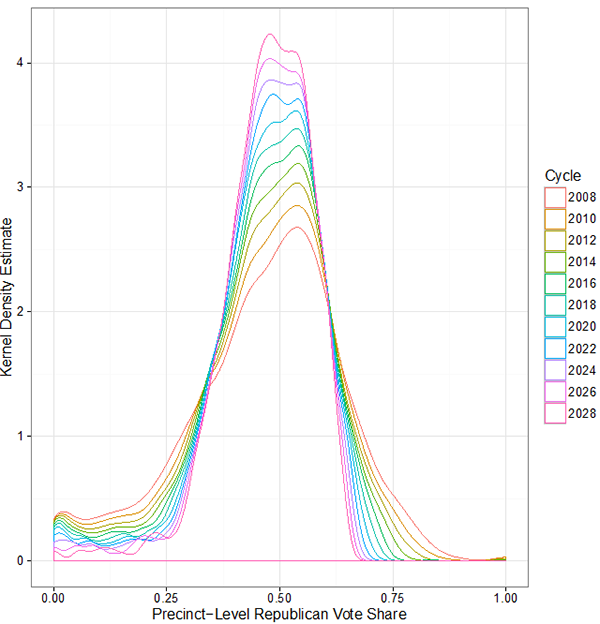 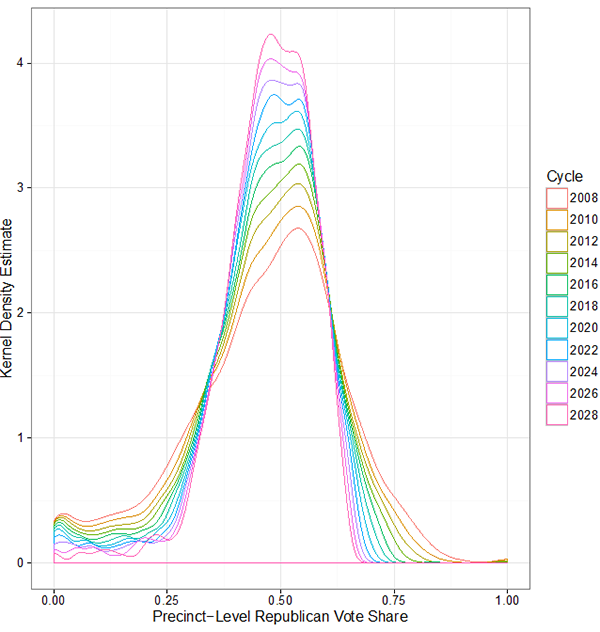 In order to examine this possibility, we examine changes in individual voters’ partisan registration over time. Specifically, we ask if voters who moved to new locations that were very different from their old locations on the three dimensions discussed above (population density, walkability, and GOP vote share) subsequently changed their registration status in a direction matching the change in their environment. Put more succinctly, do Democrats become more Republican over time when they move to more Republican areas (and vice versa)? Our analysis suggests that this process is, indeed, happening. When Republicans move to areas that are more densely populated, have higher degrees of walkability, and are more Democratic, these individuals — over time — shift their party affiliation from Republican to Democrat (or Independent). Conversely, Democrats who move to areas that are less densely populated, have lower degrees of walkability, and are more Republican, tend to become Republicans (or Independents).

The American electorate is geographically divided. Partisan affiliations correlate with tastes for housing characteristics, with Democrats clustered in urban cores and Republicans spread out across suburban and rural areas. However, our analysis suggests that this spatial distribution of partisans is not the result of any form of systematic partisan sorting. Individuals both move frequently enough and care more about “practical” considerations than political ones when deciding where they want to move. Thus, we do not believe that a “big sort” is occurring. We do, however, find evidence that where one chooses to live is important inasmuch as one’s peers have the ability to influence one’s own partisan affiliation. Whether this process is happening due to social influence, a desire to not stand out, or something else is a question that remains to be answered.