The finish line is in sight. Only hours remain before states tally 2014 general election ballots. Democrats, by all rights, should be gasping for air and eager to put the midterms in the rearview mirror and turn toward 2016. However, the matter of which party will emerge with a decisive win on Tuesday is still murky. Democrats will almost certainly not defy historic trends and gain seats in legislatures, but Democratic losses might be relatively modest and tempered by gaining key governor’s mansions. On the other hand, this election could leave Republicans in their strongest position in state legislatures in American history.

The midterm elections are almost never friendly to the party holding the White House when it comes to state legislatures. In midterm elections since 1900, the party residing at 1600 Pennsylvania Ave. has lost an average of 415 state legislative seats in the midterm election cycle. That typically results in a net loss of several legislative chambers as well. The 2010 midterm cycle was particularly brutal for the party of the president. With Barack Obama in the White House, Democrats suffered a net loss of over 720 legislative seats and saw 22 legislative chambers move to the GOP column. Republicans held onto most of those gains in 2012, putting them at their highest mark of legislative control since 1952. And that success may be the biggest challenge for Republicans this year. The GOP currently controls 27 legislatures — how far can the pendulum swing? The most legislatures ever controlled by Republicans was after the 1920 election when they controlled both chambers of the legislature in 30 states — and that historic high-water mark is within the GOP’s grasp.

There are a total of 6,049 legislative seats having regularly scheduled elections this year (a number that does not include special elections to fill vacancies for seats that would not normally be up this year). That is just about 82% of the nation’s 7,383 seats. That includes all of the state house seats in 45 states and all, or part, of the state senates in 42 states. Four states (Louisiana, Mississippi, New Jersey, and Virginia) conduct regular legislative elections in odd-numbered years. In four other states (Kansas, Minnesota, New Mexico and South Carolina), all state senators were elected to four year terms in 2012, so they do not have any senate seats up this year.

Turnover in legislatures this year will likely be below the average of around 20%. The pre-election turnover, taking into account incumbents who chose not to run along with the roughly 125 who lost in primaries, is just over 16%. In every decade, the election year ending in the number four is usually the year with the lowest legislative turnover. For the first time in over six years, the word “redistricting” does not play an outsized role in the election preview. Only legislative candidates in two states, Maine and Montana, are running in new districts this year.

More than 43% of the seats up this year only have one major-party candidate on the ballot, and those candidates are enjoying a pleasant fall absent campaigning for their own seats.

Nearly 11,000 people are on the November ballot trying to get their ticket punched for the legislature. About 675 of those candidates are from minor parties. The success rate for minor-party candidates seeking legislative seats is very small. Less than half of 1% of all state legislators are not affiliated with one of the two major parties. Nebraska’s unicameral legislature is nonpartisan, and all 49 Cornhusker State senators are considered nonpartisan. Not including the Nebraska nonpartisans, who generally self-identify and then organize as Republicans and Democrats, there are currently 28 third-party state legislators.

In addition to the 80% of legislative seats up, there are 36 gubernatorial races on tap. The results in those elections for the executive mansion will mostly determine whether the states remain mostly unified as R or D, or whether we see a major uptick in divided state government. There is a high likelihood that there will be more change in the party controlling the executive branch than change in the legislative branch of state government. And here’s a hint: Divided government will probably increase at the state level.

There are many ways to gauge partisan strength in states: total legislative seats, percentage of seats, legislative chambers, legislatures, governors, and states. Here’s a look at the numbers headed into the election:

Notes: This table includes the New York and Washington Senates as having Democratic majorities even though they are functionally controlled by coalitions that include all GOP Senators and a small number of Democratic senators who have split with the Democratic caucus. Nebraska is not included in the chart because its 49 senators are elected on a nonpartisan basis.

Notes: *The legislative seats data is from June 2014 so as not to include the nearly 75 vacancies that currently exist. In June, there were 24 vacant legislative seats. A table showing the current state by state partisan composition in the 99 state legislative chambers is available at the National Conference of State Legislatures website: party control. 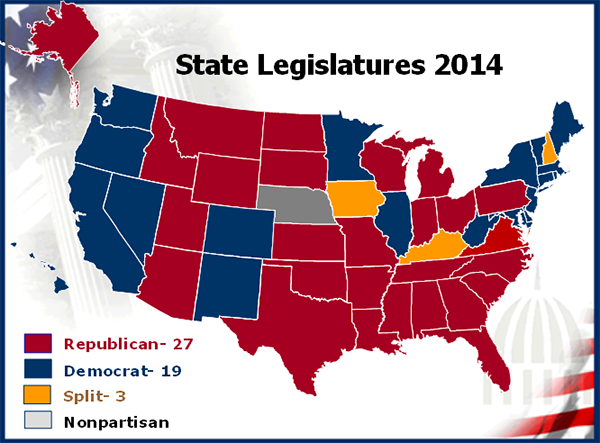 It is no surprise that Democrats are mostly on defense in legislative races this year. The party of the president is always at a disadvantage in midterms. Since 1900, there have been 28 midterm election cycles. In 26 of those, the party in the White House suffered a net loss of legislative seats. The two exceptions were in 1934, when Democrats gained with Franklin Roosevelt in the White House, and in the 2002 midterm, when Republicans saw modest gains during George W. Bush’s first election after 9/11. Another way to look at that is that over the past 114 years in midterm elections, the party of the president is only successful in legislative elections in one out of every 14 elections. That’s a daunting trend to break. See chart below for the gory history of the president’s party in midterms. 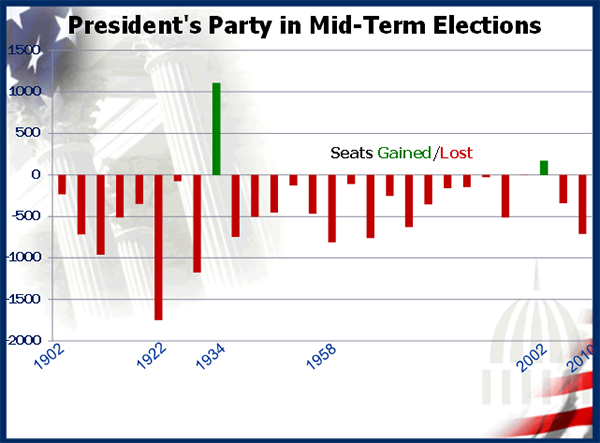 This year is not shaping up as a good one for Democrats; however, it may not be a particularly bad year either. Republican chamber gains in 2010 and 2012 leave them with a limited number of states where they might win new majorities in 2014. In fact, there appear to be fewer battleground chambers than normal this year.

An average of 13 legislative chambers switch party control in every two-year election cycle. It is very likely that this year’s change will be well below that average. Even a generous view of what constitutes a “battleground” leads to just 16 chambers that are realistically in play in only 15 states. Here are the chambers to watch:

Table 3: Most competitive legislative chambers in 2014 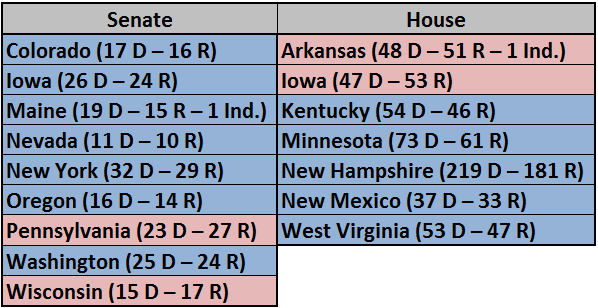 The most obvious thing about the “chambers to watch” list is that Democrats are defending majorities in 12 chambers while Republicans only have to shore up four, and none of those will be easy for Democrats to take. Democrats’ best hopes are to win additional seats in New York and Washington, allowing them to break Republican-controlled coalitions that run the senates in those two states. The GOP has its sights set on two chambers in particular where they have been making steady gains in recent elections — the houses in Kentucky and West Virginia. Democrats have controlled the West Virginia House of Delegates since the 1930 election and the Kentucky House since 1922. Republicans would also like to win the always hard-fought Nevada Senate, where early voting appears to favor the GOP. And if they pick up two seats in the Iowa Senate and maintain the majority in the Iowa House, Republicans would have full control of the Iowa state government for the first time since 1998. All of the senates on the list above would see party control change with a shift of just two or fewer seats. That means that just modest midterm success by the GOP could result in historic Republican control of legislatures.

U.S. states are at historic lows of divided government. Only three legislatures have chambers controlled by opposite parties (not factoring in the coalitions in New York and Washington). The last time that there were only three split legislatures was in 1944. When matched up with control of governors to determine full partisan control of state government, there are only 11 divided states headed into the election — the lowest number since 1952. With at least 11 close gubernatorial contests and about 10 legislative chambers that are truly toss-ups, it looks certain that at least some states will move from unified government to divided. That is almost guaranteed to happen in Pennsylvania, where incumbent Gov. Tom Corbett (R) trails badly in the polls. In several traditionally Democratic states like Massachusetts and Illinois, Republican gubernatorial candidates have a shot at winning, so those states could end up with divided governments as well.

In my 26 years of working for and studying legislatures, it seems to me that the past two years have been a strikingly active biennium for state lawmakers. Some states pushed forward bold gun-control measures while other states boldly loosened laws regulating gun ownership. Many states passed various immigration-related measures while Washington failed to move on the issue. States reacted to the federal health law in clear and substantial ways depending on which party was driving the process. From minimum wage to the environment and from taxes to education reform, legislatures and governors are going to be active in policymaking in 2015 while Washington remains gridlocked. That’s why it is worth keeping track of these down-ballot races Tuesday night, even if they don’t attract the spotlights of the TV networks.