Description: Before the candidates are formally nominated, we have a fairly good idea of which party will win the upcoming election. People’s expectations of the state of their personal financial well-being are expected to influence the outcome of the election. The more negative the electorate is about the future, the more likely the incumbent party will do poorly. Also, the longer a party has controlled the White House, the more likely they will have accumulated discontent from the electorate. Consequently, the longer a party has had the White House, the more likely it will lose. This model forecasts the outcome of the popular vote accurately for all but two elections since 1956. For the House model, we also need to consider the incumbency advantage.

Predictors: Logged time in the White House for a party and second quarter negative expectations for one’s financial situation taken from the second quarter of the presidential election as presented in Table 8 of the Survey of Consumer Attitudes and Behavior. For the House model, I add in an interaction item that accounts for the number of open seats and whether the election year is good for a party. By definition, midterms are taken to be good for the party in opposition to the president. On-year elections are considered neutral unless one party is overwhelmingly expected to be victorious.

The Forecasts: For president, 50.4% of the two-party vote for the Democratic presidential candidate. For the House, 0 seat change. Both forecasts were made on June 28, 2016.

Percentage likelihood that the forecast has predicted the popular vote winner for president (that the estimate is above 50 percent): 62%

Percentage likelihood that the forecast has predicted the House majority party winner: 98%

Description: We have used a variation of this model since the 1980s. Our approach has been to follow a parsimonious structural model, focusing on a few predictor variables based on strong political science theory, and measured well in advance of the election itself. The presidential model is:

The House forecast is also a political economy model that is based on a classic referendum model rooted in strong theory. That is, how well the president’s party does in House elections is a referendum on how well the president and his or her party have handled economic and non-economic issues, conditioned on whether it is a midterm election year. The House model is:

For the House forecast: 1) Political Popularity = the job approval rating for the president in the June Gallup Poll, 2) Economic Conditions = growth rate of real disposable income over the first two quarters of the election year, 3) Midterm Status = 0 for presidential election years and = 1 for midterm election years. 4). Seats exposed = number of seats the president’s party has up for reelection.

The Forecasts: For president, 51.1% of the two-party vote for the incumbent presidential party. For the House, a three-seat gain for the president’s party. Both forecasts were made on July 29, 2016.

Percentage likelihood that the forecast has predicted the popular vote winner for president: 83%

Percentage likelihood that the forecast has predicted the House majority party winner: 97% 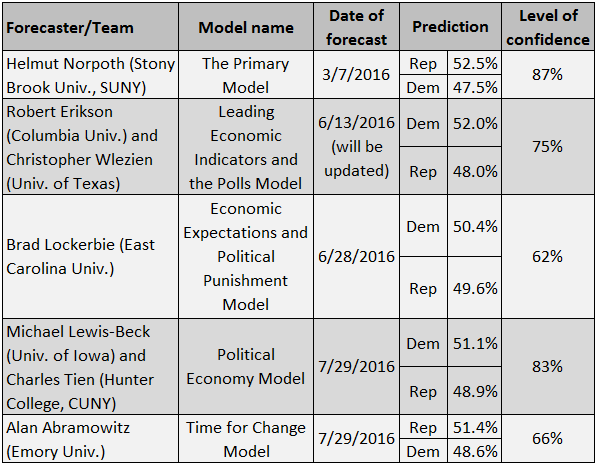 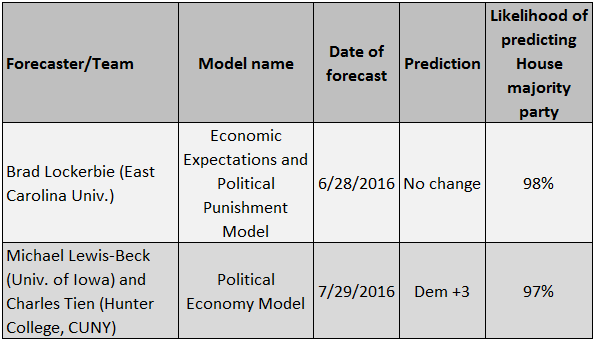