Programming note: The Crystal Ball is taking the week off for Thanksgiving next week, but we’ll be back with another edition on Thursday, Nov. 29.

So what can we glean from last week’s election? Plenty. Here are 12 takeaways from the 2012 election, presented in bite-sized pieces. One note: all vote totals and percentages used in this piece were as of Wednesday morning; the figures may change as states continue to finalize their results. 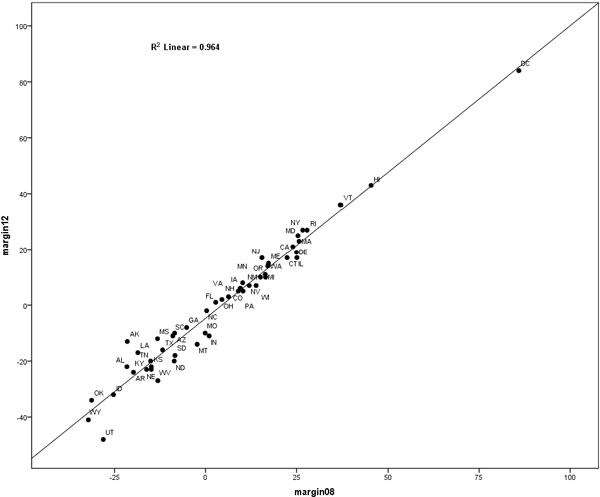 The biggest outliers are Utah, where Obama did substantially worse than expected in 2012, and Alaska, where he did substantially better than expected. Mitt Romney’s Mormonism probably explains why Obama underperformed in Utah, and Sarah Palin’s absence from the national ticket might explain Obama’s uptick in Alaska.

To see the change in the Democratic coalition over the years, first look at Appalachia. The mountainous region stretching from New York in the north all the way to Mississippi in the South was at one time a decent source of votes for Democratic presidential candidates: Southern Democrats Jimmy Carter (in 1976) and Bill Clinton (in 1992 and 1996) — the last two Democratic presidents before Obama — did reasonably well in the region in their victories: Carter won more than two-thirds of the 428 Appalachian counties in 1976, and Clinton won close to half (see chart below). In this election, the region was unkind to Obama; he won only 7% of Appalachian counties in his successful reelection bid last week. In fact, Obama lost every county in West Virginia, the only state wholly contained in Appalachia. 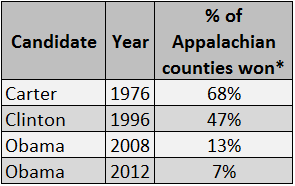 Note: *Counties included are the 428 counties and independent cities classified as part of Appalachia by the Appalachian Regional Commission. Appalachia, as defined by the commission, covers all of West Virginia and parts of Alabama, Georgia, Kentucky, Maryland, Mississippi, New York, North Carolina, Ohio, Pennsylvania, South Carolina, Tennessee and Virginia.

3. …but Romney crushed in the biggest counties

Obama’s failures in rural Appalachia are worth noting, but even more so are Romney’s setbacks in the nation’s 50 most populous counties.

Romney won only six of the nation’s 50 largest counties (as measured by the Census Bureau). This was a significant drop-off from the last two winning Republican presidents, George W. Bush in 2004 — who won 16 of these 50 counties in 2004 — and George H.W. Bush in 1988 — who won a majority of these counties, 29-21, in his victory over Michael Dukakis.

Notes: Counties based on 2011 Census estimates. The 2012 election results are from Politico; 2000 and 1988 are from Dave Leip’s Atlas of U.S. Elections. Counties listed in order of population size.

Note that the Democratic margin in these counties generally increased over the three elections in question; granted, this is not necessarily an apples to apples comparison — we’re comparing a Democratic victory to two Republican victories, and the 50 biggest counties today were not the 50 biggest 12 or 24 years ago — but it’s still fair to say that just as Democratic strength is waning in rural America, it is growing in the country’s most densely populated counties.

4. Gender gap nothing new (but variable)

Every four years, reporters ask why there is a gender gap in American elections. It’s a reasonable question, but it’s also not a new phenomenon. For at least 40 years with only one exception, women have been more supportive of Democratic candidates than men, and men have been more supportive of Republicans (1976’s exit polls indicated that men and women supported Democrat Jimmy Carter equally). 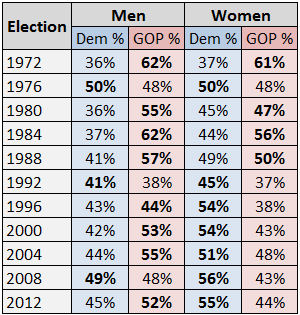 Note: Based on exit poll data from the New York Times.

5. Growing Hispanic vote even more critical in some swing states

Just as in 2008, a key component to Obama’s success in 2012 was his strong support among Hispanic voters. As Latinos have become a larger portion of the electorate, their influence on electoral math has correspondingly increased. But because Hispanics have gone so heavily Democratic in 2008 and 2012, they have played an even larger role in some key swing states. As the chart below details, the Latino portion of the vote in battleground states such as Colorado, Florida, Nevada and New Mexico has grown a fair amount since 2004. With Obama winning 71% of Hispanic voters nationally, they made New Mexico uncompetitive and helped keep the other three states in Obama’s column on Nov. 6.

Chart 5: Hispanic portion of the vote in 2012 nationally and in selected states 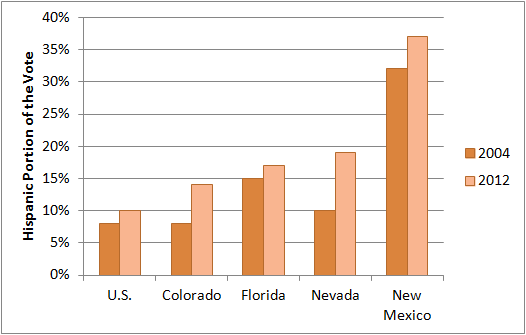 For the 28th time in 30 presidential elections, the Buckeye State sided with the winning presidential candidate; the two exceptions in that time period (which dates back to favorite son Republican William McKinley winning his first term in 1896) are 1944 and 1960, when Ohioans favored losing Republican nominees over winning Democrats.

Longtime watchers of the Old Dominion are stunned not only by its ascension from presidential backwater to presidential battleground, but also by its standing as the state that, in two straight elections, has been closest to President Obama’s national average.

Much has been made of increased black turnout across the country in 2012; below is a map comparing Obama’s performance in Virginia in 2008 and 2012. While he was down in much of the state, his performance increased in some places (light blue) that mostly have significant black populations. In fact, of the 20 localities where Obama did better in 2012 than 2008, three-fourths of them have populations that are at least 30% African American. Virginia’s population as a whole is about 20% black. 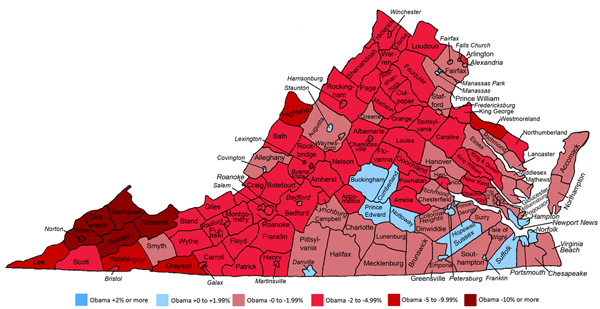 While Virginia has hewed closest to Obama’s national winning average over the past two cycles, Colorado has played a more decisive role: It has provided Obama with his 270th electoral vote in each of his victories.

Presidential decider is a new role for the Centennial State, which is similar to Virginia in the sense that it too has become more favorable to Democrats in recent years due to demographic changes. Before 2008, Colorado had never provided the decisive electoral vote to a presidential candidate; dating back to 1856 — the start of the United States’ current two-party Democrat vs. Republican arrangement — New York and Ohio each have provided a presidential victor with his decisive electoral votes six times, more than any other state (Illinois has been decisive five times).

Despite a natural fixation on Florida, Ohio and Virginia in the presidential election, it’s worth noting that Obama could have lost all three but still won the election — so long as he held Colorado and all the states where he performed better than Colorado.

Now that independent Sen.-elect Angus King of Maine has officially announced he will caucus with the Democrats — a stunning decision (sarcasm alert) — Democrats officially will have a 55-45 advantage in the Senate next year, barring any retirements or other changes. That 10-seat edge comes almost entirely from their ability to win many more Red State seats than Republicans were able to win from Blue States. 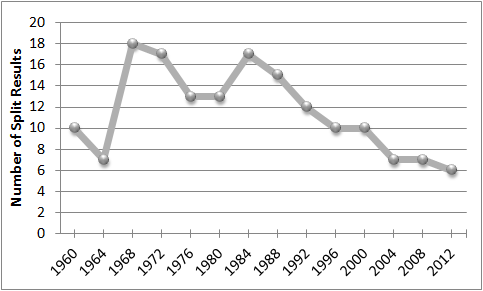 Democrats also won six “split ticket” Senate victories in 2008, the last presidential year; Republicans only won one. Those 2008 Red State Democratic victors — in Alaska, Arkansas, Louisiana, Montana, South Dakota and West Virginia — are up for reelection in 2014, providing some ripe targets for Republicans.

According to The Washington Post, Democrats won a greater percentage of total House votes than Republicans did (49% to 48.2%), despite the GOP winning a (likely) 234-201 seat edge in the coming House (Democrats appear set to gain eight net seats in this election). That means they won 49% of the total House vote but only 46.2% of the total seats.

It’s not uncommon to win a significantly different share of House seats than the total national vote would indicate. Back in 2008, for instance, Democrats won 53.9% of all House votes, but 59.1% of the seats.

Prior to the 1994 Republican revolution, Democrats had an inherent, structural advantage in the House — they won, on average, significantly more House seats than their popular vote total merited between 1946 and 1992 (for more, see this Crystal Ball piece from September). But since 1994, Republicans have had a slight advantage, and that advantage continued this year — Republicans won 48.2% of the total vote, but 53.8% of the seats. That 5.6 percentage point gap between votes won and seats won is the largest for either party since 1992 — the last year of the Democrats’ structural House advantage — when Democrats won only 50.8% of the total House votes but 59.3% of the seats (for an 8.5 percentage point gap in votes won versus seats won).

Two factors probably explain the GOP’s current, intrinsic edge: The Republicans controlled redistricting in many states that went for President Obama, allowing Republicans to cement a 13-5 majority in Pennsylvania, a 12-4 edge in Ohio and a 5-3 advantage in Wisconsin, to name a few states. Democrats benefited from redistricting in some places, like California and Illinois, but on margin Republicans probably came out of the decennial remapping ahead. Incumbency, too, is a powerful factor, even for freshmen: more than four of five 2010 House Republican freshmen will be back in the House for a second term. Additionally, roughly 90% of House incumbents who sought another term will return to the House; that’s about two percentage points below the postwar average.

Top Republicans argued during the final days of the campaign that big crowds were an indication they were gaining momentum in the campaign.

It’s an argument we’ve heard before:

“…the campaign reporters on McGovern’s plane remained curiously reluctant to write him off as a loser… [They] were as isolated as a bunch of submariners, trapped in the world of the press plane, seeing the enthusiastic crowds at the rallies and living with the intermittently manic McGovern staffers. This isolation nourished their atavistic urge to be with the winner, to write the upset story of the century. They kept talking of the election of 1948, of how the campaign reporters with Truman had been blind to the meaning of all those cheering crowds.” (emphasis added)

— The Boys on the Bus, by Timothy Crouse

Obviously, Mitt Romney did a whole heck of a lot better in 2012 than George McGovern did in 1972. But huge crowds — or, for that matter, yard signs — are not predictive of anything.

What election was 2012 most like? We were asked this a thousand times prior to Election Day. No election is exactly like another, but there are similarities. 2012 was certainly no 1980 — a totally inaccurate prediction pushed for months and months by conservative pundits such as Dick Morris. 2012 wasn’t 1992 either, where an incumbent president was ousted because “it’s the economy stupid.” And in the end, while the contest was competitive, it was certainly no squeaker like 2000. Instead, 2012 most resembled 2004, when an incumbent president had a mixed record that had polarized Americans, but won with a superior organization, favorable demographics and effective early attacks on an opponent from Massachusetts.