For the first decade after Sept. 11, national elections showed a steady rise in voter turnout. The number of ballots cast in presidential elections jumped from 105 million in 2000 to a record 131 million in 2008, an increase of 25% in just eight years. Similarly, the midterm congressional turnout swelled from 66 million in 1998 to an all-time high of 86.5 million in 2010, a 31% increase over a dozen years.

The number of ballots cast from election to election should be increasing at least a bit as the size of the voting-eligible population constantly grows. But in the last two national elections, 2012 and 2014, the upward turnout trend has been broken.

The total votes cast in the 2012 presidential election were down by more than 2 million from four years earlier, while the midterm vote last fall for the House of Representatives (the only office contested in all 50 states in a midterm election) dropped by more than 8.5 million votes from 2010. It marked the first time since 1996-98 that the turnout declined in back-to-back national elections.

What has happened? Surveys point to an increasingly busy and mobile society, where voting is not a high priority for many people. Changes in registration and voting procedures in the states have been a mixed bag — easing the process of casting a ballot in some states, tightening it in others. But there has also apparently been a change in the way Americans view their electoral choices.

One of the few “positive” outcomes of 9/11 was that it awoke voters to the high-stakes nature of their vote. No longer could the choice between the Democrats and Republicans be described as “Tweedledee” and “Tweedledum,” as it was during the more mellow years of the late 20th century.

After 9/11, and the Iraq War that followed, it was clear that it did make a big difference whether a Democrat or Republican won the White House, or for that manner, which party controlled Congress.

In the election of 2004, a highly charged referendum on the presidency of George W. Bush, nearly 17 million more votes were cast than in 2000. It marked the largest raw turnout increase from one election to another in the nation’s history. In 2008, turnout grew by another 9 million votes, as the historic candidacy of Barack Obama headlined another high-voltage election.

But in recent years, it seems as though voters have become more attuned to what they do not like in American politics than what they do. Stark differences between the parties remain, but voters appear to be tiring of the shrill partisanship, “my way or the highway” rhetoric, and the frequent examples of government dysfunction that follow.

Neither party is held in high regard these days, a fact that was evident in the 2014 congressional voting. Although the Republicans won their highest number of House seats since the 1920s, both the GOP and the Democrats lost millions of votes from 2010. Actually, in spite of their success, the Republicans shed more votes than the Democrats. The aggregate nationwide House vote for the latter was down 3.4 million from 2010, while the Republican tally fell by nearly 4.8 million.

Chart 1 and Table 1: The rise, and recent fall, in presidential and congressional midterm voting 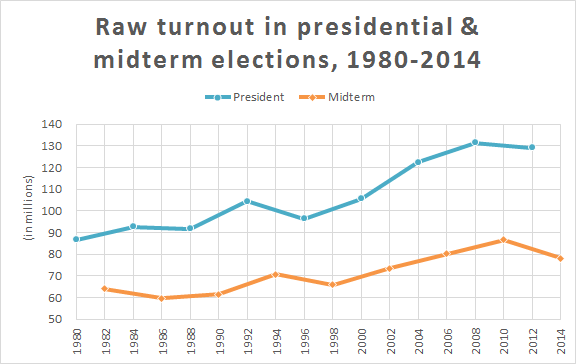 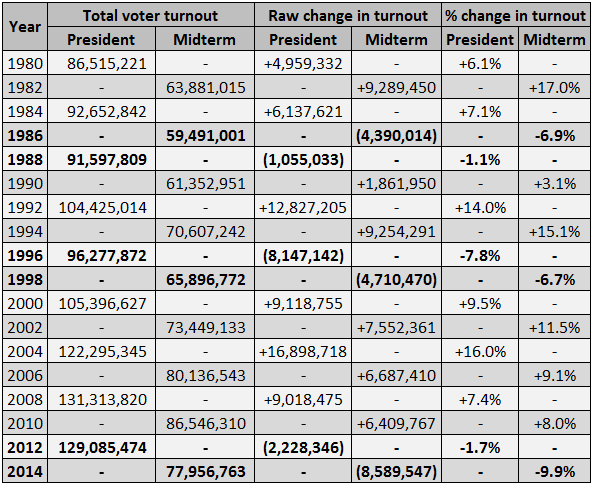 Notes: Midterm election turnouts are based on the aggregate nationwide vote for the House of Representatives. The vote using the “highest” race in each state, usually for governor or senator, would produce a larger total. But in midterm elections only House seats are contested in every state. Election cycles with decreased turnout compared to previous presidential or midterm cycles are highlighted in bold.

Sources: America Votes 30 (CQ Press, an Imprint of SAGE Publications) for past presidential election turnouts. CQ Weekly Reports for House midterm election turnouts through 1992; editions of America Votes for House turnouts from 1994 through 2010; Rhodes Cook Letter (February 2015) for the 2014 House turnout. All turnouts are based on official results from state election sources. Votes are included for all candidates that are listed on the ballot as well as write-in votes (where they are tallied). Ballots that are left blank are not included.

It is not just recent November balloting at the presidential and congressional levels where voters have been drifting away. The Republican presidential primary turnout dropped from nearly 21 million in 2008 to less than 19 million in 2012, even though in both years there were competitive nominating contests.

The Democratic primary turnout featured an even sharper decline, from nearly 37 million voters in 2008 to just nine million in 2012. The Democratic turnout collapse, however, was understandable: The party’s 2008 primary campaign featured a riveting 50-state struggle between Obama and Hillary Clinton, while Obama ran essentially unopposed for re-nomination in 2012.

The 2014 primary turnout was also much lower than in the previous midterm election. The aggregate Democratic and Republican primary tally last year was down by more than 5 million votes from 2010 (using the primary vote from the race which drew the highest number of votes, usually governor or senator, in states where a turnout comparison could be made between the two election years).

And then there is this year’s ongoing mayoral race in Chicago, which began with a first-round vote in late February. Four years ago, former congressman and White House chief of staff Rahm Emanuel easily won the right to succeed outgoing Mayor Richard M. Daley, by taking 55% of the vote in the first round. Nearly 600,000 votes were cast then, with more than 325,000 going to Emanuel.

In spite of the heated nature of this year’s race, which was much closer, Chicago voters were not similarly inspired to participate. Turnout for the February mayoral election was just short of 480,000, with less than 220,000 votes cast for Emanuel. Because he did not reach the required 50% mark, Emanuel has been forced into an April 7 runoff with his principal opponent, Cook County Commissioner Jesús “Chuy” Garcia.

What might be done these days to keep voters from drifting away permanently? Laws to ease registration and voting would probably have an effect. So would increased competition, from a wider array of battleground states in presidential voting to fewer safe districts in the House.

And of course, voters might appreciate an electoral process with more comity and a governing process that is more productive. How well the parties and their candidates can perform these two objectives in the next year or so will go a long way in determining whether the recent downward line in voter turnout is a brief hiccup or a new trend. 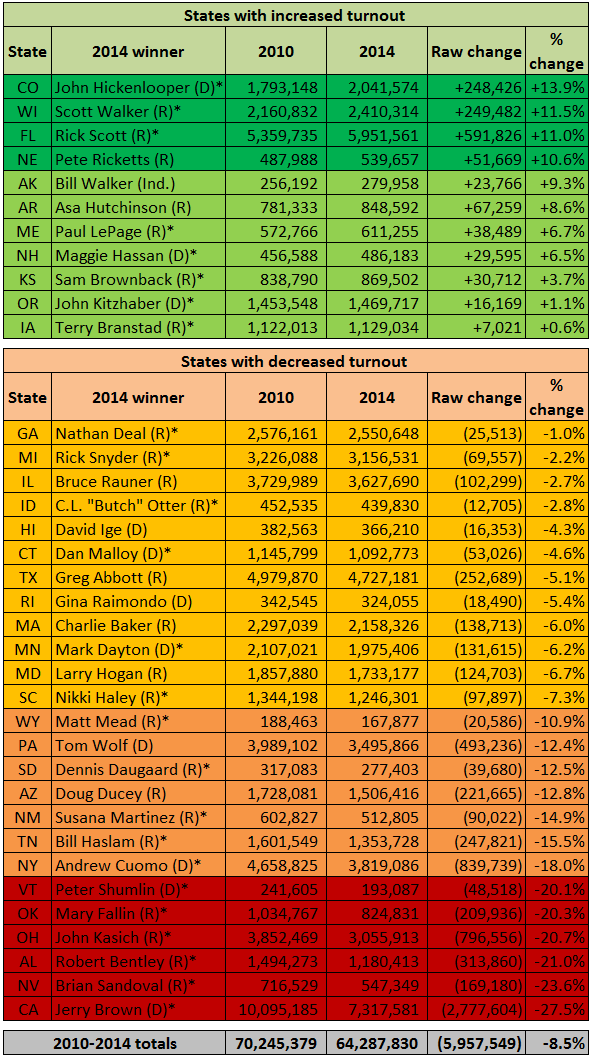 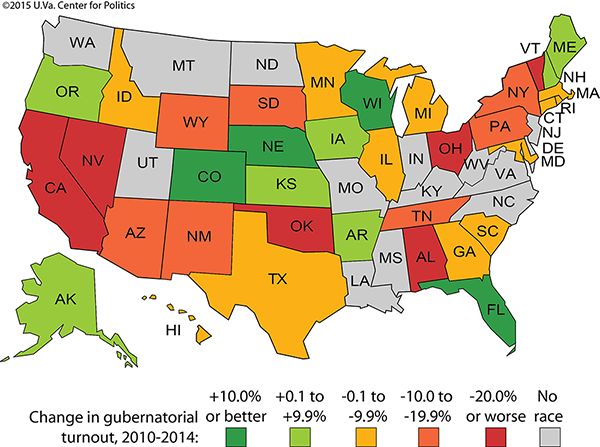 Notes: An asterisk (*) denotes an incumbent at the time of the 2014 election. Turnout is based on the total vote cast for gubernatorial candidates that were either listed on the ballot or were write-ins. Ballots left blank for governor were not included in the turnout tally.

Table 3: 2014 congressional turnout by district: where people voted — or didn’t 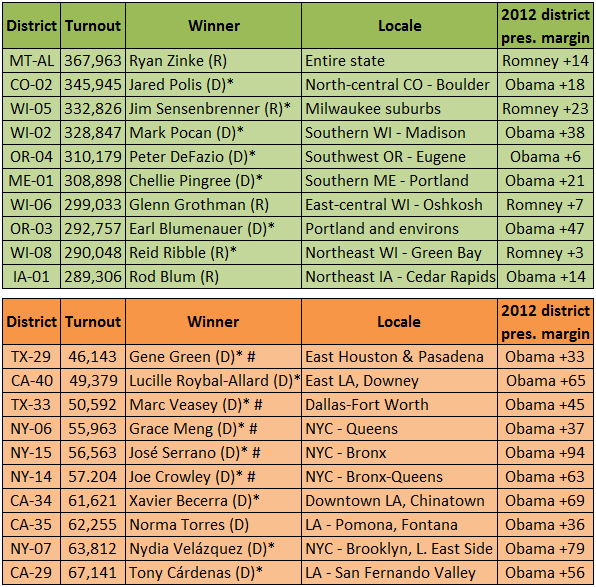 Notes: An asterisk (*) denotes an incumbent at the time of the 2014 election. A pound sign (#) indicates that the winner had no major-party opposition. Turnout is based on the total vote cast for House candidates that were listed either on the ballot or were write-ins. Ballots left blank for the House were not included in the turnout tally.

Sources: Voter turnout numbers are based on official 2014 results posted on state election web sites and compiled by the author. The 2012 presidential victory margins by congressional district are from The Almanac of American Politics 2014 (National Journal).