Prior to the Alabama special Senate election on Tuesday night, there was an ongoing discussion in the media about whether the Republicans would lose either way in Alabama. But as bad as it would have been for Republicans to have had Roy Moore (R) in their Senate caucus, losing this seat is, in our view, significantly worse. The victory by Sen.-elect Doug Jones (D) will cut the GOP’s Senate majority to a slim 51-49 margin, and it opens the door to an unlikely Democratic Senate takeover next year.

Perhaps more alarmingly for Republicans, the race reinforced several trends we’ve seen in other places this year. Here was another special election where a Democratic candidate ran very heavily ahead of Hillary Clinton’s 2016 showing. Republican turnout was OK, just like in the Virginia gubernatorial race, but Democratic turnout was a lot better, both in urban and suburban parts of Alabama and also in the Black Belt — a rural, heavily African-American part of the state that gets its name from the color of the soil (turnout was exceptionally high throughout this region).

There are obviously a lot of compounding, negative factors for Republicans that led to this result, many having to do with the GOP nominee. But the positive environmental signs for Democrats are a big part of the story, too. Individual special elections are not always a harbinger of the future, but it’s impossible not to compare Jones’ victory to Scott Brown’s (R) January 2010 Senate election upset in Massachusetts, which suggested a terrible Democratic environment that endured through the party’s disastrous 2010 midterm. At the time, Democrats pinned the loss on their own bad candidate, Martha Coakley, but huge electoral upsets don’t have just a single cause, and the Republicans ignore 2017’s warning signs at their own peril.

Meanwhile, Jones should remember Brown, too — his time in the Senate was short-lived, ending in 2012. Jones will have three years in the Senate, but it will be very hard for him to add to that tenure when he presumably seeks a full term in 2020.

But that’s a long time off. Democrats now have miraculously added a Senate seat that, truth be told, they have no business having, and it’s one they do not have to defend next year.

That’s good for the Democrats because they already are defending a lot of territory next year — 26 of 34 seats, including a special election in Minnesota — but none of their incumbents are retiring. Even the most vulnerable Senate Democrats up for election next year — Sens. Joe Donnelly (D-IN) and Claire McCaskill (D-MO) — are probably no worse than 50-50 to win reelection at this point, given the challenges the presidential party historically faces in beating Senate incumbents from the other party (Republicans would counter by arguing that McCaskill, at the very least, looks like a goner — we’ll see). The list of vulnerable Republican seats is much smaller, but Sen. Dean Heller’s (R-NV) reelection bid is a pure Toss-up, as is the open GOP seat in Arizona. The math problem for Democrats prior to Tuesday night was that even if they pulled off an unlikely sweep of all these seats, maintaining the 26 they already hold plus capturing Arizona and Nevada, that would only get them to 50-50 in the Senate, with Vice President Mike Pence breaking ties for the Republicans.

But now, that sweep would get them to a bare 51-49 majority. We are not predicting that to happen, and Republicans are still favored, perhaps significantly, to hold the Senate. But this flub could have real consequences for the GOP.

Democrats will say that they have additional offensive targets, like the open seat in Tennessee that former Gov. Phil Bredesen (D) is now contesting, and perhaps Rep. Beto O’Rourke’s (D) longshot bid against Sen. Ted Cruz (R-TX). We’re holding those races at Likely (though not Safe) Republican for now. We don’t want to overapply the lessons of Alabama to other races: Roy Moore may quite possibly have been the worst Senate candidate in quite a long time, and there have been plenty of duds in recent years (mostly, it must be said, on the Republican side, and these poor choices by their primary electorates have cost them several seats over the past few cycles). However, given what we’ve seen in other special elections this year, and in our home base of Virginia, Moore’s awful candidacy could not have been entirely responsible for turning a 28-point Trump win in Alabama last year into a narrow Democratic Senate victory just 13 months later.

While there are many voting patterns to dig into, we will highlight two trends in particular. As we said in our preview of the Alabama race last week, a Jones win map had to include notably better performances in the big urban and suburban counties of Alabama by way of strong black turnout and improved Democratic performance among college-educated whites. Jones achieved that handsomely. Using the 2012 election for Chief Justice of the Alabama Supreme Court as a baseline — a race Moore won by only about four percentage points, 52%-48% — we can see where Jones improved the most over the Democrat in that election five years ago, Bob Vance. Jones ran between six and seven points ahead of Vance in Jefferson County (Birmingham), Madison County (Huntsville, and in Shelby County, the key Birmingham suburban locality that is solidly Republican. He also ran four points ahead of Vance in Mobile County and two points ahead of Vance in the Black Belt as a whole.

Additionally, if we just look at the college-educated non-Hispanic white percentages of counties and how Moore performed compared to the 2012 race, there was a fairly strong negative relationship between those two variables, as shown in Chart 1 (R-squared = .47). That is, the larger the share of the white population with at least a bachelor’s degree, the worse Moore tended to perform compared to his 2012 contest, and vice versa. Exit polls are imperfect, especially on education questions, but the Alabama exit showed that Jones won 40% of white college graduates and 22% of whites with no college degree (31% of the white vote overall). The improvement for Jones in the metropolitan areas and Moore’s improvement in some of the more rural regions align with those findings. Considering the fact that the 2012 presidential exit poll showed Barack Obama winning just 15% of the white vote, all of this was more than a little remarkable.

Chart 1: Scatterplot of Moore’s change in performance from 2012 to 2017 vs. the percentage of the non-Hispanic white population with at least a bachelor’s degree, by county 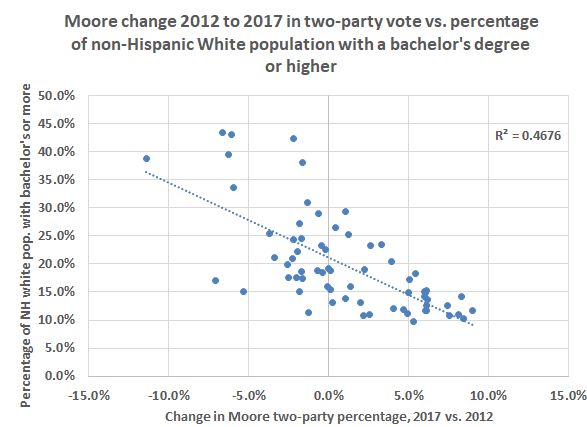 For President Trump, Tuesday’s result means he struck out twice in Alabama — the primary by backing appointed Sen. Luther Strange (R) and then the special by supporting Moore — in a state where he arguably should have had as much influence as just about any other across the nation. This brings into question his ability to pull GOP candidates to victory even in places where he is relatively popular. This too should worry Republicans as they look to the midterm election.