Can President Obama overcome a weak economy and win in 2012 by campaigning against the Republican Congress? The historical evidence for this claim is weaker than his allies would like to admit.

Like most journalists who have written on the subject, Goldstein repeated the conventional wisdom that Truman’s campaign against the “do-nothing Congress” was responsible for his victory:

Facing long odds in the 1948 election, Truman put Republicans in his campaign bull’s-eye and unloaded on the “do-nothing Congress.” He won, and conventional wisdom took a beating.

This idea, which has been echoed by opinion makers ranging from former New York Times columnist Frank Rich to Washington Post reporter Dan Balz, has given hope to Obama supporters demoralized by the current state of the economy.

Unfortunately, the dramatic narrative of Truman’s victory doesn’t hold up to scrutiny. As University at Buffalo, SUNY political scientist James Campbell pointed out in 2004 (gated), Truman’s comeback was fueled by “sizzling” growth in the year before the election (the time when voters tend to most strongly reward economic improvement):

Until recently, for instance, the Bureau of Economic Analysis (BEA) figured that GDP in the first half of 1948 (leading into the Truman-Dewey contest) was growing at a healthy 4.1% rate. The BEA’s latest series indicates that this greatly understated growth at the outset of the 1948 campaign. The BEA now figures that the economy was growing at a sizzling 6.8%, a revision that helps explain Truman’s miraculous comeback…

This well-timed surge in economic growth is likely to have played an important role in the success of Truman’s campaign. By contrast, the International Monetary Fund just downgraded its forecast for US economic growth in 2011 and 2012 to 1.5% and 1.8%, respectively.

To understand why the Truman example may not translate for Obama, compare the annual GDP growth rate of the economy in the six quarters before the 1948 election under Truman with the median predictions from the Federal Reserve Bank of Philadelphia’s Survey of Professional Forecasters (the first data point for Obama is the actual Q2 2011 GDP growth rate; the rest are forecasts): 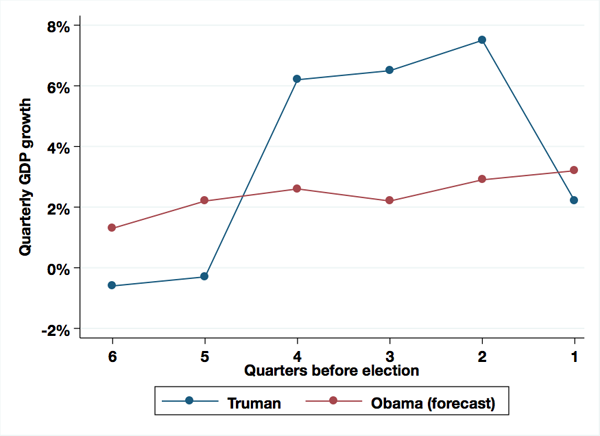 The discrepancy between Truman and Obama’s likely trajectory is even more obvious when you look at the cumulative change in the overall size of the economy (as measured by real GDP) starting six quarters before the election: 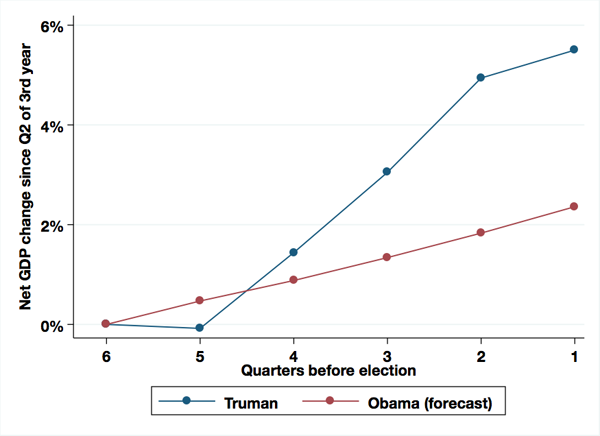 Of course, economic projections are frequently wrong. Obama could enjoy an unexpected surge in growth that would propel him to re-election. But in its absence, he will face a much more difficult path to reelection than Truman did.