America’s 50 state legislatures are often called the “laboratories” or “engines” of democracy. That has perhaps never been more true than in the past couple of years when legislatures, some dominated by conservatives, some by liberals and some by moderates from both parties, have enacted numerous bold policy initiatives across the ideological spectrum. Legislators have been particularly active in tackling major issues over the past several years, even as Washington has been gridlocked. States passed groundbreaking, and often controversial, laws on same-sex marriage, immigration, the environment and collective bargaining by public employees, to name a few. And with the economy bumping along, state lawmakers have had to make difficult budgeting decisions. State legislatures allocate and make policy for more than $1.5 trillion every year, and 49 states are constitutionally required to enact balanced budgets.

That’s why November’s elections for more than 6,030 legislative seats are important. After winning big in 2010, Republican legislators seized the opportunity to push a more conservative agenda in the states where they had complete legislative control. They also took advantage of their new majorities to draw favorable new district maps, better positioning them to hold on to some of the 2010 gains.

The 2010 Republican wave that swept across state legislatures followed a big Democratic wave in 2006 reinforced by modest Democratic gains in 2008. With only a few short weeks until Election Day, signs do not point to massive gains by either party this time around. Certainly, some chambers are poised for a switch in the majority party, but 2012 is not shaping up as a year for tectonic partisan shifts. So, what’s at stake?

Legislative seats up in 2012 and turnover

More than 10,000 candidates will fight to win a seat in the state legislature this year and spend over $1 billion combined on their campaigns. There are currently 7,382 state legislative seats in the 50 states. That number will increase by one this November because New York is adding one state senator, going from 62 to 63.

Some change in the total number of legislative seats every 10 years is fairly common as part of the redistricting process. The lines being used in this election for almost every legislative district have been redrawn using 2010 census data to reflect population growth and shifts since the last census. Four states holding elections this year are not using new lines. In Kentucky and Pennsylvania, courts overturned newly drawn plans and kept old maps in place for one more election. Maine and Montana wait until next year to do legislative redistricting.

Redistricting definitely looms large this year. New lines inevitably bring general upheaval and a spike in incumbent defeats as well as higher turnover in general. In the typical election following redistricting, turnover of all legislative seats jumps from around 18% normally to more than 25% (sometimes close to 30%), and it is highly likely that that trend will continue this November. What makes this trend especially noteworthy is that there was an unusual surge in turnover in 2010 to nearly 25% due to the Republican wave at the state level. This gets a bit tricky so follow closely. One cannot simply add 2010 turnover to the expected change in 2012 and say that turnover will add up to 50% in the two elections because some of those seats are switching in both elections and would therefore show up twice. Furthermore, some legislators are jumping from one chamber to the other, thus they are not really rookies to the legislature. However, it is likely that when legislative sessions convene next January, nearly half of all state legislators in the United States will have two years or less experience on the job as lawmakers.

Republicans hold more seats in legislatures today than at any point since the 1920s. That fact reflects Republican success in winning seats two years ago, putting the party in a commanding position in governing states for the past two years. This may be the GOP’s biggest challenge in this year’s legislative elections: Is it possible to go even higher? On the other hand, Democrats would like 2012 to be a rebound election after losing more than 720 seats in 2010 — the biggest loss by either party since 1966. Currently, 54.5% of all partisan legislators are Republican, and 45.5% are Democrats. Only 22 of the nation’s 7,382 legislators are not from the two major parties. (Nebraska’s unicameral legislature, made up of 49 senators, is technically elected and organized on a nonpartisan basis.) A table of current partisan composition in each state is available on the website of the National Conference of State Legislatures.

In the 2010 election cycle, a whopping 24 legislative chambers saw a change in majority control, and they all went in the direction of the GOP.

Headed into the 2012 election, Republicans have the majority in both chambers of the state legislature in 26 states, compared to 15 states with Democrats in charge and eight states where power is divided. (Reminder: this adds up to 49 states because Nebraska’s nonpartisan unicameral is not included.) And if you add Virginia, where the Senate is tied but the chamber is functionally controlled by Republicans under tiebreaking rules, to the GOP column, there are 27 Republican legislatures, matching the high point of control in well over a century for the party. In 1928, the GOP also controlled 27 states (before Alaska and Hawaii became states).

In terms of legislative chambers, Republicans have the majority in 59, and Democrats run 36. Three legislative bodies are currently tied; the Alaska Senate, Oregon House and Virginia Senate. In Alaska, a bipartisan coalition runs the Senate. Oregon has a power-sharing agreement that provides for Co-speakers. In Virginia, the GOP controls the Senate because the GOP lieutenant governor casts the tiebreaking vote. 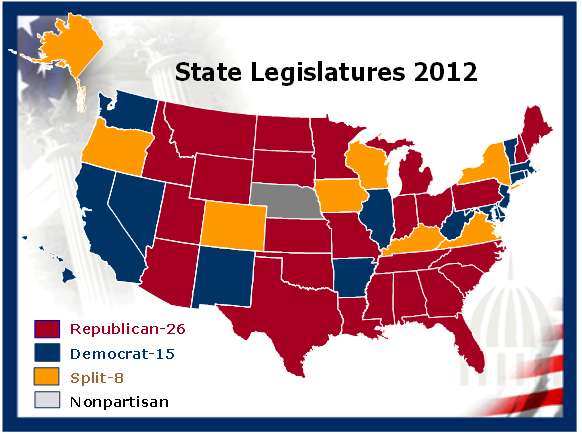 What to expect in November

Unlike the past several election cycles, there is not a clear trend emerging in 2012 pointing to big gains by either party. It is likely that the party winning at the top of the ticket will net seats, but even that is not guaranteed. Since 1900, the party winning the White House has gained legislative seats in 20 of the 28 presidential election years. The midterm trend is that the party controlling the White House almost always loses ground in states. The table below shows the historic connection between legislative seats and the race for the White House. 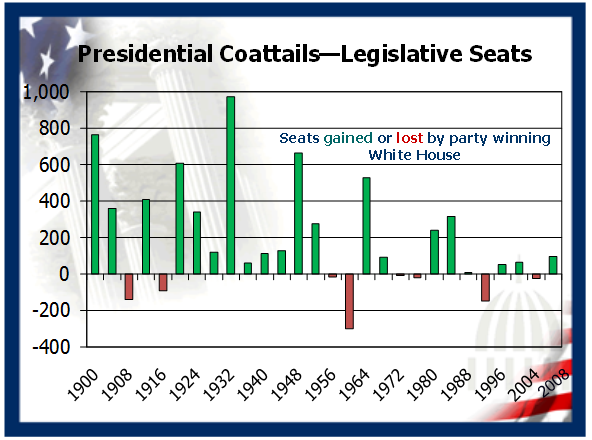 Add to that the fact that neither party has dominated in special legislative elections thus far this year — although Democrats have a slight advantage on that front — and it just doesn’t look like a “wave year” for either party. A dramatic late shift to either Barack Obama or Mitt Romney would obviously change the calculus.

In 2008, the vaunted field operation for Obama helped Democrats net almost 100 legislative seats and move five chambers into the D column. However, Republicans gained control of four legislative bodies in that same election. In every two-year election cycle, on average 13 legislative chambers switch party control. It is likely that about a dozen chambers will change hands this year. And they will almost certainly be from the list below of legislative chambers that I currently rate as the most competitive.

Chart 2: Most competitive legislative chambers in the 2012 election 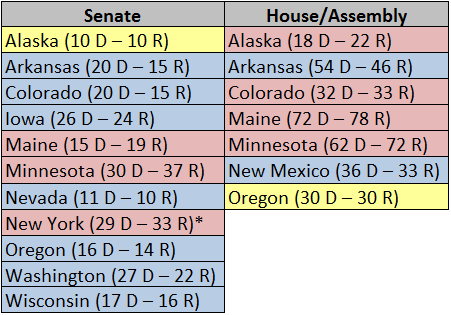 Note: *indicates that the New York State Senate is increasing to 63 seats.

When you take a strict formula look at which legislative chambers are close “on paper,” there are actually fewer this year than in recent years in large part due to the big gains that Republicans made two years ago. Only 11 Senates that are up for election this year are within three seats of changing majorities; nine Houses are within a five-seat shift. That total of 20 chambers within numeric striking distance is down from 24 in 2010 and 28 in 2008. The list of chambers to watch is actually shorter than normal for a couple of reasons. First, in several states like Indiana, North Carolina and Ohio that have been competitive in recent cycles, redistricting maps were adopted that made it particularly hard for the minority party to earn back the majority. The other reason for fewer competitive chambers is that Republicans have such large majorities in some of the chambers where they won big two years ago (e.g. Montana, New Hampshire and Pennsylvania Houses) that Democrats would need a major tide for a decent chance at winning back the majority. What’s also interesting about the “most competitive chambers” list is that it is fairly evenly divided. Nine chambers to watch are held by Democrats; seven are in GOP hands, and two are tied.

Perhaps the most interesting state to keep an eye on this Nov. 6 is Arkansas. The Natural State is the last southern state completely held by Democrats after a massive realignment in the south to the GOP over the past 20 years. The two chambers in Arkansas, along with the Kentucky House, are the only three southern chambers still in Democratic hands after a steady and consistent shift in the region to the GOP. Republicans took over a majority of all seats in the South in 2010 after being in the minority there since the 1870s. Democrats won control of the Arkansas legislature in the 1874 election and have held it ever since. History will be made in the Arkansas House regardless of who wins. If Democrats maintain their majority, they are poised to elect the first African-American speaker in the state’s history. If Republicans seize the chamber, they will elect the first Republican Speaker in 138 years.

With only 11 governor’s races in 2012 and only two of those seen as true toss-ups, the partisan battle for states is being fought in the trenches, in the thousands of legislative races raging across the country. In the end, the contest at the top of the ticket will probably have the biggest impact on which party gains ground in legislatures, especially in presidential battleground states such as Colorado, Iowa, Nevada and Wisconsin that also have close legislative chambers. However, most candidates for the legislature are still working to localize their individual races through good old fashioned shoe leather. Door knocking still matters in most of these races, so keep the porch light on for the next few weeks because you might get a visit from a neighbor trying to become your state lawmaker.