The battle for control of the U.S. Senate is where the action is this year in American politics. Right now all signs point to a near standoff in the U.S. House elections. Barring a major change in the political environment in the next few months, the 114th House is expected to closely resemble the 113th House with a slightly larger or slightly smaller Republican majority. In contrast, party control of the next Senate is definitely up for grabs this year.

The main reason why Democrats are at risk of losing control of the Senate in November is not because of public discontent with the Affordable Care Act, continued weakness in the economy or President Obama’s mediocre approval ratings. All of these issues may have an impact on the Senate elections. But the Democrats’ biggest problem this year is that they were so successful in the 2008 Senate elections. While Barack Obama was capturing the White House in 2008, Democrats gained eight net seats in the Senate, winning 20 of the 35 seats at stake.

Now Democrats must defend all of the seats that they won six years ago, including several in states that usually support Republicans. Of the Democratic seats up for grabs this year, seven are in states that were carried by Mitt Romney in 2012, including six that Romney won by a double-digit margin. In contrast, Republicans are only defending one seat in a state that was carried by Obama in 2012 — Sen. Susan Collins’ seat in Maine. And Collins is so popular that she isn’t a credible Democratic target.

A simple model based on a large body of political science research allows us to make fairly accurate predictions of seat swing in midterm U.S. Senate elections. This model is almost identical to one that I have used to accurately forecast seat swing in midterm House elections. The three predictors are the results of the generic congressional ballot question in national polls in early September; the difference between the number of Republican seats and the number of Democratic seats at stake in the election; and a dummy variable for the president’s party.

The generic ballot question provides a measure of the mood of the electorate two months before the election. Even though it asks specifically about House voting intentions, the generic ballot question predicts Senate voting as well. The seat difference variable is a measure of party exposure in the election: The more seats a party has at risk relative to the opposing party, the more seats it tends to lose. Finally, the dummy variable for the party of the president reflects the tendency of the president’s party to lose seats in midterm elections even after controlling for the other predictors in the model.

Table 1 above presents estimates for the effects of the three predictors on change in Republican Senate seats based on data for all 17 midterm Senate elections since World War II. The estimated coefficients for all three predictors are in the expected direction and highly statistically significant. Moreover, the model explains an impressive 75% of the variance in Senate seat swing. This is substantially less than the 90% of variance in seat swing explained by the House forecasting model. However, that is to be expected given the much smaller number of Senate seats at stake in each election and the larger proportion of competitive contests in Senate elections. There is simply more random variation in Senate seat swing because of the effects of campaigns and candidate quality. The only way to produce a more accurate forecast of the outcome in November is to factor in these seat-specific characteristics based on in-depth information from on-the-ground sources — the sort of information used by the Crystal Ball in making its exceptionally accurate final predictions.

Even at this early stage, however, estimates for two of the predictors in our model make it clear that 2014 is likely to be a difficult year for Democrats in the Senate. First, based on the fact that there are six more Democratic than Republican seats at stake this year, Democrats would be expected to lose 2.4 Senate seats compared with an election in which there were equal numbers of Democratic and Republican seats at stake. Second, the fact that there is a Democrat in the White House means that Democrats can expect to lose about four more seats than they would expect to lose in a midterm election with a Republican in the White House.

When we add together the effect of the seat exposure variable and the effect of the midterm dummy variable, and factor in the intercept of -0.9 in the regression equation, Republicans start off the 2014 campaign with an expected gain of 5.7 seats. That is very close to the six seats that Republicans need to regain control of the Senate.

The only predictor that is not yet set for 2014 is the generic ballot variable, and that will not be known for several months — results much earlier than the late summer or early fall have little or no predictive validity. However, at this early date we can make conditional predictions of seat swing in the 2014 Senate elections depending on the results of the generic ballot question in early September. Those conditional predictions are found in Table 2. 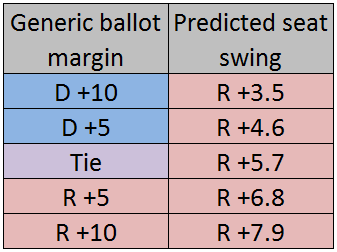 The conditional forecasts in Table 2 above make clear once again that the fundamentals in 2014 are very favorable for Republicans in the Senate elections. Even if Democrats have a 10-point lead in generic ballot polling in early September, Republicans would still be expected to gain between three and four Senate seats because of the GOP advantage on the seat exposure and midterm party variables. However, a Democratic lead of five or more points in generic ballot polling would give Democrats a better than 50/50 chance of retaining control of the Senate. On the other hand, a Republican lead of five or more points would almost ensure a GOP majority in next year’s Senate.

The 2014 elections and the future of the Senate

Because there is a Democrat in the White House and Democrats have 21 seats at stake compared with only 15 seats for Republicans, the GOP is almost guaranteed to make gains in the 2014 Senate elections. Based on the generic ballot forecasting model, Democrats will need a cushion of at least five points on the generic ballot question in early September in order to have a better than 50/50 chance of keeping control of the Senate. The good news for Democrats is that any Republican majority in the 114th Senate is almost certain to be very narrow, and the Senate seats that are up for grabs in 2016 would give them an excellent chance of regaining control of the Senate in that year.

Regardless of which party is in the majority next year, the long-term outlook for the Senate is for a continuation of narrow majorities with party control at stake every two years for the foreseeable future. This is a situation that is likely to encourage more of the intense partisan conflict that has characterized the Senate in recent years. Moreover, the next Senate is almost certain to be even more ideologically polarized than the current Senate. The replacement of several moderate Democrats with conservative Republicans will increase the already wide ideological divide between the parties. This may lead to further erosion of the filibuster rule and other Senate practices that allow the minority party to obstruct, delay or defeat decisions supported by the majority party. For better or worse, the end result of these trends is likely to be the transformation of the Senate into a body that much more closely resembles the House of Representatives.