— But landslides have become rare in presidential elections since 1960.

— The legitimacy of U.S. elections might benefit from a new landslide in 2020.

As we approach the culmination of the critical election of 2020, we might get useful perspective by looking at past presidential elections. Begin with a simple question: Why do we care about elections? Alexis de Tocqueville, the great early analyst of American life, was astonished at the tumult of our political contests: “Factional ardor is redoubled, and all the artificial passions which the imagination can create in a happy and peaceful land are agitated and brought to light…[W]ho can refrain from astonishment that such a storm could have arisen?”

An easy answer would be that elections create the future of the country, as the electorate determines the policy choices of the nation. But decades of studies of voting have demonstrated that policy decisions are only one, and often only a minor, consideration in voters’ minds. Indeed, much research presents considerable evidence that the electorate is uninterested, perhaps incapable, of making specific policy choices.

But elections are different from a summation of the actions and motivations of individual voters. Elections are collective acts that have consequences. Whatever the character of the electorate, we can begin with the most obvious effect of elections. Even if voters don’t care about policy, their votes are the means by which the nation chooses its leaders for the next two to four years. At the least, these choices vaguely endorse the present directions of government (“Stay the Course”) or envisage ambiguous new policies (“Time for a Change”). More ambitiously, depending on the alternatives presented by candidates, elections may imply or command specific programs.

Ballots are the language of democratic government. The vocabulary of this language may comprise only two words, “Yes” and “No,” and even these monosyllables may be mumbled in the dialogue between voters and leaders. But the dictionary of this language can expand as leaders speak and voters respond to additional words, still vague but more evocative, such as “A New Deal for the American People” or “Morning Again in America.” And sometimes leaders can enlarge the political thesaurus — as did Lyndon Johnson in 1964 – and  “ask the American people for a mandate — not to preside over a finished program–not just to keep things going, I ask the American people for a mandate to begin.”

There are some interesting lessons to be gained from our recent national contests. The focus here will be on landslide, one-sided elections, and the possibility of electoral mandates. Let’s look at the historical record, going back a century, to the 25 elections beginning in 1920. (See Table 1) 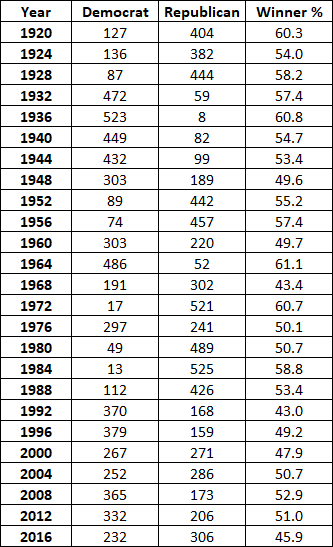 Note: Votes by individual “faithless electors” are attributed to popular winner of state.

In the first 10 elections in this set (1920-1956), there were five Democratic and five Republican victories. The parties rotated wins by large margins overall, the average number of electoral votes won was 375 out of a constant base of 531, the average margin of victory was 342 electoral votes, and the cumulative electoral votes for Republicans and Democrats were similar. This period includes only one close election, that of Truman in 1948. Landslides of over 400 electoral votes were achieved by unspectacular candidates such as Warren Harding and Herbert Hoover, as well as the imposing figures of Franklin Roosevelt and Dwight Eisenhower — and even Calvin Coolidge came close in 1924.

In the last 10 elections (1980 to 2016), in contrast, winning candidates have achieved an average of only 375 tallies on an enlarged base of 538 (now including Alaska, Hawaii, and District of Columbia), and the average margin has shrunk more than a third, to 212. Only Ronald Reagan in 1984 and his designated successor George H.W. Bush have won over 400 votes. Republicans have won six of 10 elections, and achieved a clear predominance of electoral votes. Yet the GOP has lacked popular vote pluralities in two of these elections.

The last five winners have done even worse, barely squeezing into office, winning an average of only 312 electoral votes. These small victories still had large consequences, as Donald Trump exemplifies, but any claims to a popular mandate are illusory.

The same declines in electoral support are evident in the popular vote. In the earlier period, the median vote for the presidential winner was 56.2% of the overall national vote, a solid endorsement and only one of the ten winners failed to get a national majority. Even that exception, Truman in 1948 at 49.6%, came within a rounding count of half the country’s support.

Popular endorsement declined considerably in a transitional period, (1960-1976), when three of five winners — Kennedy, Nixon in 1968, and Carter — lacked a convincing national majority. Then, in the 10 recent contests, the median winning percentage fell to only 50.7%, a thin margin. Moreover, four of ten winners fell short of a national majority, and three others — Reagan in his first term, Bush and Obama in their second terms — barely scraped above half the national total. The absence of clear popular support has now become accepted as a structural condition of presidential elections. Trump not only won in 2016 while gaining only 46% of the national vote; he also now makes that standard a basic part of his re-election strategy (as reported in the New York Times).

These patterns are not important because of statistical differences. Their significance may be an unnoticed, but important change in the legitimacy of presidential elections in the absence of policy mandates. The pattern of the earlier period advantaged the winning party and candidate in subsequent policy disputes. They had the rhetorical wind to their backs by virtue of the solid endorsement of the electorate in their landslide margins. Moreover, being large, these victories were essentially immunized against charges of election fraud or maladministration. Their electoral success also gave them the power to set the governmental agenda. Even if the winners had only a thin program – such as Harding’s “normalcy” or FDR’s hopeful but vague promise of “a New Deal,” they could at least say that they had won some sort of clear and clean “mandate” because of their avalanche of votes. They could act, undergirded by the premise that they had democratic sanction for their actions.

But these mandates also were limited because the voters were ready to switch to the opposition, giving it, in turn, a different landslide victory. Again, the opposition might not have a specific program at hand, but at least the parties would worry that voter sentiment might decide it was “time for a change,” and therefore would pay attention to the electorate’s passing fancies, i.e. heed the popular will.

Harding, for example, relied on this democratic premise in his inaugural address. Renouncing any American involvement in the League of Nations, he invoked the presumed mandate in the election of 1920: “We turned to a referendum, to the American people. There was ample discussion, and there is a public mandate in manifest understanding, intelligent, dependable popular will of America.” A dozen years later, Franklin Roosevelt would also invoke a popular call for a very different program: “The people of the United States have not failed. In their need they have registered a mandate that they want direct, vigorous action…. They have made me the present instrument of their wishes. In the spirit of the gift I take it.”

Politicians often regard their victories as a “mandate” for their pet programs. Landslide victories particularly are treasured for such enablement. But the reams of data on voters’ views do not consistently support these claims. Academic studies of public opinion see the mass electorate as often confused about policies, wavering in its sentiments, and superficial in its judgments.

Yet voting is still important and potentially beneficial, if we recognize the important difference between “public opinion,” which is often no more than individuals’ transient views about distant matters, and “electoral opinion,” which is the judgment that politicians must consider, because their jobs depend on paying attention. As political scientist Stanley Kelley acutely wrote, “Among the institutions of democratic states it is elections that give political leaders the most direct and obvious incentive to take note of the wishes and views of ordinary people.” A landslide is an electoral reality, but the meaning of the landslide is not obvious or certain. Nevertheless, the landslide’s redefinition as a mandate does promote the core democratic principle — that government rests on the consent of the governed; that political reality tells candidates that they should pay attention to these voters.

Contrast this relationship of voters and parties in the more current period. With narrower margins between Republicans and Democrats, even winning politicians cannot claim much of a mandate, while losers become more tempted to dispute the meaning, legitimacy, and even the accuracy of ballot tallies. What plausible mandate could Clinton claim with 43% of the popular vote in 1992, George W. Bush with a margin of two electoral votes in 2000, or Donald Trump with a deficit close to three million popular votes in 2016? As politicians are less empowered to attempt solutions, the overall political system becomes more prone to deadlock, and less equipped to solve problems. The voters may still be ready to switch the party in power, but may be more likely to become enraged at ever-futile responses from government. It is probably, therefore, no surprise, that trust in government has declined substantially since the 1970s, the same period in which landslide elections have been less frequent.

In earlier periods, landslide elections fostered legitimacy and the claim to popular mandates. In our current politics, elections evidence division, opposing directions in the vote, and partisan polarization and conflict.  In this system of conflictual politics, the dialogue of democracy has become an indecipherable babble of loud and contradictory voices. Perhaps the election of 2020 will bring the United States the old boon of a landslide election.