— Even as public approval of President Trump and Congress remain in the basement, 50-state opinion polling shows that Americans as a whole are pretty enamored of their governors.

— In fact, 47 of the nation’s 50 governors are outperforming Trump in their states, and this group includes governors from all regions and partisan affiliations, and in states of every political leaning.

— The governors, Democratic and Republican alike, seem to have pulled off this trick by eschewing the divisive rhetoric of Donald Trump and taking a pragmatic approach to governing.

Why are the governors so popular?

If you just look at polls measuring approval for the president and Congress, you’d assume that Americans are in a profound funk.

According to the FiveThirtyEight.com polling average, President Donald Trump has been mired at roughly 40% approval and 54% disapproval for about two years. Approval of Congress only recently rose above 20% following seven years when it was mostly even lower, according to the RealClearPolitics.com average.

But when you turn away to the states, this portrait becomes significantly less bleak. Net approval rates for governors are shockingly good, given our era’s widespread political grumbling.

Consider the most recent survey work by Morning Consult. While other independent outlets conduct gubernatorial approval surveys, only Morning Consult does so in all 50 states, providing the most standardized way to look at the governors.

Bevin paid for his low approval rating on Tuesday night, losing his reelection bid narrowly. However, the four unpopular Democrats all won just last November: Brown, Ige, and Raimondo won second terms, while Lamont held Connecticut as an unpopular Democratic incumbent was leaving office. Justice, elected as a Democrat in 2016 before switching parties in 2017, is up for reelection next year.

In other words, 88% of governors today are above water. That’s an improvement from the 78% who were above water in the May 2016 Morning Consult gubernatorial surveys.

More to the point, that’s a lot better than Trump is doing nationally.

We can compare the governors and Trump on approval because Morning Consult also does regular surveys of Trump’s approval ratings in the 50 states. In the most recent numbers, Morning Consult found Trump above water in 19 states (38%) and underwater in 31 (62%).

Putting these two measures together, we can gauge how much more popular the nation’s governors are than Trump. Here’s a breakdown, running from the biggest gubernatorial leads over Trump to the few governors who are doing worse than Trump is: 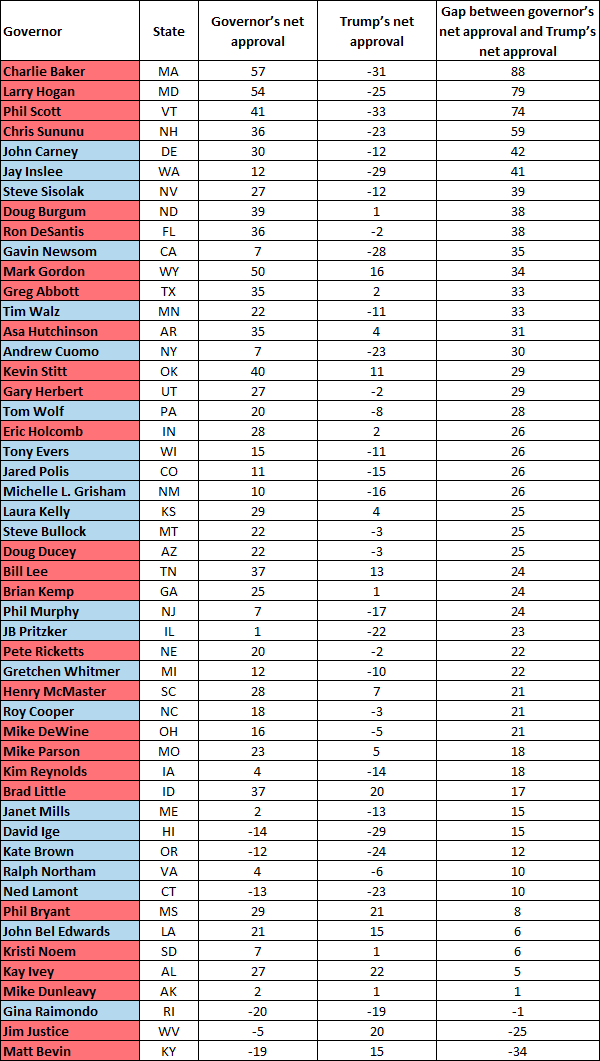 The first thing to note: Only three governors are faring worse in their states than Trump.

One of the three, Rhode Island’s Raimondo, is doing just a point worse than Trump, so that’s a virtual tie. The other two are unpopular governors in solidly red states where Trump continues to poll well: Bevin in Kentucky and Justice in West Virginia.

In all, then, 47 governors — 94% of all governors now serving — have higher approval ratings in their state than Trump does. And some of them are leading Trump by a whopping margin.

Six governors are outpacing Trump in their states by at least 40 percentage points: Republicans Charlie Baker of Massachusetts, Larry Hogan of Maryland, Phil Scott of Vermont, and Chris Sununu of New Hampshire, plus Democrats John Carney of Delaware and Jay Inslee of Washington state.

Not surprisingly, these are mostly all solidly blue states, meaning that the comparison starts with an especially low approval score for the president.

It should also be noted that this is a bipartisan bunch.

Among those with net approval ratings that exceed Trump’s by 30 points or more, the partisan breakdown is nine Republicans and six Democrats.

Indeed, seemingly every type of governor has shown an ability to outperform Trump by a large margin.

— Moderate Republicans governing Hillary Clinton-won states who have been able to separate their brand from Trump’s (this includes Baker, Hogan, Scott, and Sununu).

— Republican governors who are even more popular than Trump is in their solidly red states (Doug Burgum of North Dakota, Mark Gordon of Wyoming, Asa Hutchinson of Arkansas, Kevin Stitt of Oklahoma, Gary Herbert of Utah, Eric Holcomb of Indiana, Bill Lee of Tennessee, and Pete Ricketts of Nebraska).

— And even a few moderate Democrats governing red states (Laura Kelly of Kansas and Steve Bullock of Montana).

How have these governors managed to do it? We asked this question of political observers in these states. We found three common themes:

They’ve taken advantage of the strong economy. Most governors have seen their popularity benefit from today’s good economic conditions to a greater degree than Trump’s has, because they aren’t laden with his non-economic baggage.

“Governors, like presidents typically do, get credit for the state of the economy in their state,” said Andrew E. Smith, director of the University of New Hampshire Survey Center. This takes shape in a virtuous cycle, in which a booming economy translates into higher tax revenues, which in turn provides more budgetary resources to enact policies that make voters happy, Smith said.

They’ve followed the old Michael Dukakis motto: competence, not ideology. The defining characteristic of Trump’s presidency has been the aggressive prosecution of the culture wars. Not so for the nation’s governors.

In Idaho, for instance, Republican Brad Little has “tried to stick to something like a middle course in most controversial areas,” said Randy Stapilus, a journalist who covers Idaho politics.

In similarly red Arkansas, Republican Asa Hutchinson has been “thoroughly pragmatic in maintaining the state’s Medicaid expansion and stymying some of the most conservative legislators’ efforts on social issues,” said Hendrix College political scientist Jay Barth.

And in Oklahoma, Republican Kevin Stitt has “typified the Generation X mantra of ‘just hand us the tool box and we’ll fix it,’” said University of Oklahoma political scientist Keith Gaddie. “He’s a businessman who ran a positive campaign and has engaged in substantive problems.”

The same approach has worked for some Democratic governors, too. In Kansas, for instance, Democrat Laura Kelly is “low-key and a problem-solver,” said Burdett Loomis, a University of Kansas political scientist.

Reach beyond your base and don’t gratuitously offend voters. Trump has aggressively ignored this advice, but with the retirement of controversial Maine Gov. Paul LePage in 2018, there are few governors who seem to enjoy stirring the pot just because they can.

Consider Republican Greg Abbott in Texas. Despite being a credentialed conservative, he has “made a concerted effort to reach out to groups outside of the GOP base, in particular Latinos,” said Rice University political scientist Mark P. Jones.

Abbott’s leadership style “is relatively low-key and his demeanor is calm, collected, and thoughtful,” Jones said. “His rhetoric is generally free of the type of polarizing hyperbole that Trump is famous for. A large majority of Texans view him as the governor of all Texans, not just of Republican Texans.”

Stitt has taken the same approach in neighboring Oklahoma, Gaddie said. “He is not divisive,” he said. “Style matters.”

Of course, there’s one possible explanation for the gubernatorial edge over federal officeholders: That the political narrative has become so focused on national politics that, for most voters, state governance is flying under the radar. In other words, many governors may be experiencing the benefits of voters’ benign neglect.

“None of the governors who are above water tweet constantly, and none of them appear on their local news with anything like the frequency of Donald Trump on the national news,” said veteran Georgia political journalist Tom Baxter.