This much is obvious: South Carolina has proven to be a disaster for Mitt Romney. The size of his defeat by Newt Gingrich — a 12%+ landslide in a four-way race — is virtually a repudiation of his candidacy in a state that has prided itself on picking the eventual nominee for 32 years. And we suspect Romney will have several more nights of heartburn, much like this one, as the nomination process unfolds.

The surprise for some may be that Mitt Romney remains a strong, though no longer prohibitive, favorite for the Republican presidential nomination. He continues to benefit from an unorganized, inadequately funded, polarizing opposition. The weak Republican field has aided Romney from the start. Still, if there is another South Carolina-style collapse in Florida for Romney, it will have devastating consequences for the frontrunner — and may even bring calls for a new candidate to enter the race. The pressure is on for Romney in the Sunshine State.

Concerning South Carolina, one has to give Gingrich credit for remarkable resiliency. He has risen from the dead not once but twice in this campaign: First, after his campaign imploded in the middle of last year and now, after poor performances in the first two nominating contests. During Gingrich’s first shipwreck in May, his then-spokesman put out a statement saying that “…out of the billowing smoke and dust of tweets and trivia emerged Gingrich, once again ready to lead those who won’t be intimated by the political elite and are ready to take on the challenges America faces.” It was an over-the-top statement, but now seems strangely appropriate after such a wild week of developments in South Carolina.

Granted, this was favorable territory for Gingrich as a conservative, southern candidate from neighboring Georgia, but Romney, as recently as Wednesday, led by 8% in the polls according to the RealClearPolitics polling average. For Gingrich to snap back in such spectacular fashion is a testament to the way he performed in two crucial debates, and in how he reacted to the controversy over his ex-wife’s accusations that he asked her for an “open marriage” before they got divorced. Gingrich handled the accusations about as well as he could have, turning CNN’s John King into a punching bag at the start of Thursday night’s debate and, more than likely, turning a negative into a positive with voters. Conservative Republicans detest most of the news media and rally to support any GOP target of press attacks. In South Carolina, Gingrich received a boost from his framing of the scandal coverage not dissimilar from the polling bounce Gingrich’s one-time nemesis, Bill Clinton, got during his impeachment battle over his affair with Monica Lewinsky. News media “feeding frenzies” can have unintended consequences like this.

The South Carolina exit poll shows Gingrich doing surprisingly well everywhere, with every group, including women who didn’t appear put off by the adultery and open marriage charges. Romney’s team had hoped Newt’s baggage would weigh him down, and tried to add to it by jumping on Gingrich for his “anti-capitalist” targeting of Romney’s work at Bain Capital. Many conservatives around the nation joined in condemning Gingrich’s tactics, and 64% of Palmetto State exit poll respondents said they held a positive view of Romney’s background as an investor. Yet Gingrich’s attacks did not seem to backfire: 31% said Romney ran the most unfair campaign, compared to 25% for Gingrich.

Gingrich’s win brings to a halt any prospect Romney had for ending this contest with a win in Florida on Jan. 31. What Gingrich now needs is for Rick Santorum to drop out of the race so the conservative vote can consolidate. The writing is in capital letters on the wall for the ex-Pennsylvania senator, who has lost out to Gingrich as the leading “anti-Romney” candidate. Santorum may stay in the race until Florida, but he has no path left to the nomination. Just as Gingrich is eyeing Santorum’s anti-Romney voters in Florida, Romney hopes Santorum will survive through the voting there — and won’t become the next Rick Perry, dropping out before Election Day.

Ron Paul, meanwhile, also has no path to the nomination, and his showing in South Carolina was poor. His views on defense, foreign policy and social issues did not sell in this deeply conservative state. Still, Paul won’t drop out soon — or perhaps at all, prior to the convention. As long as he can win delegates — particularly in future caucus states — and be given a national forum for his insurgent campaign through free press and debates, he is likely to continue on. His realistic goals are to influence the GOP platform and secure a primetime speaking slot.

In the first three states we have seen that the proportion of evangelical Christians in the electorate is revealing about, and somewhat predictive of, Romney’s performance. In Iowa, nearly three in five caucus goers were evangelical/born-again Christians (57%) according to entrance polls. In South Carolina, that number exceeded Iowa — 65%, according to exit polls. New Hampshire, where Romney romped, has a much more moderate profile — only about one in five voters there were evangelical/born-again. To use sports parlance, Romney has played two of his first three games in hostile environments.

According to exit polls from 2008, Romney is heading to more favorable ground. Chart 1 shows the exit/entrance polling data from the first three GOP contests, plus information from four years ago about some upcoming states. As is clear from the chart, these upcoming contests are less conservative than Iowa and South Carolina, if not New Hampshire. 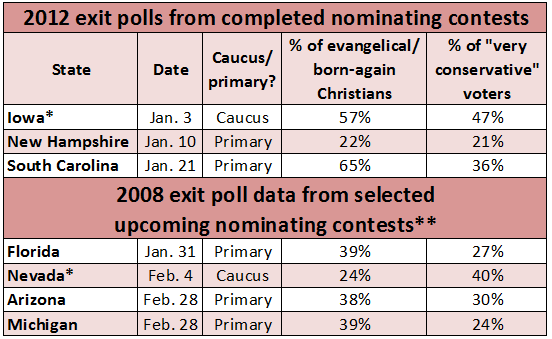 Notes: *Polls of caucuses are called entrance polls, because they are taken before a caucus participant enters the caucus. Exit polls are taken after a voter votes.

**Other contests from now until the end of February are caucuses in Maine (Feb. 4-11), Colorado (Feb. 7) and Minnesota (Feb. 7). Exit/entrance polling data are not available from these states from 2008; the other contest is the Missouri primary (Feb. 7), but that contest does not award delegates and Newt Gingrich did not qualify for the ballot there.

And, beyond these numbers, Romney has built-in advantages in these upcoming states. He is the only candidate — at the moment — who has the resources to saturate the heavily populated Sunshine State with advertisements. Florida is a much bigger state than the ones that have voted thus far — total turnout in Florida was roughly 2 million in 2008’s Republican primary; that’s more than double the votes cast in the first three contests combined. Indeed, as of Saturday, many more absentee/early votes have already been submitted in Florida (about 197,000) than votes cast in Iowa (about 121,500). And that number presumably will shortly eclipse New Hampshire’s total GOP primary vote (about 248,000). Florida is a mega-state battle in a war thus far dominated by small-state skirmishes.

After South Carolina, though, there are no guarantees for Romney anywhere; he will have to work hard to beat Gingrich in the Sunshine State. Romney is leading by nearly 19 percentage points there according to the RealClearPolitics average, but because of Gingrich’s Palmetto win that lead will almost certainly be cut dramatically this week. Remember: Gingrich led in that very same poll average in Florida just two weeks ago (see the graph at the link).

Going into February, Romney — on paper — would seem to have many advantages. About a quarter of caucus-goers in Nevada in 2008 were Mormon; Romney should do well there, and the other candidates, save Paul, might not even bother contesting it. The major contests looming at the end of the month are primaries in Arizona and Michigan. Arizona is not as conservative as one might think. As the chart shows, its percentage of evangelical and “very conservative” voters (according to 2008’s exit polls) was almost identical to Florida’s — somewhat surprising demographics from Barry Goldwater’s home state. Meanwhile, Romney has deep Michigan roots; his father was governor and he grew up there.

At the very least, there’s every reason to suspect that this contest will go at least into March’s Super Tuesday, and perhaps much longer. We also cannot eliminate the possibility, however faint, that this field is not yet complete, especially if Gingrich wins Florida. The Crystal Ball’s Rhodes Cook laid out the possibilities last month, and his analysis still holds. Establishment Republicans do not want Gingrich as their nominee, period. Privately, some senior GOP members of Congress have predicted that if Newt is the Republican nominee, the House will go Democratic in November.

Nonetheless, Gingrich will fight hard, using elite opposition to him as a battle cry that has resonance with rank-and-file party members still smarting over the establishment’s “imposition” of John McCain in 2008. That makes the White House happy, even though it is not obvious that a long campaign is automatically bad for Romney. After Mitt’s self-inflicted wounds over releasing his tax returns during last week’s debates and stumbling answers on some other topics, it’s clear that Romney needs plenty of training before any fall showdown with Barack Obama. Hillary Clinton made Obama a better candidate during the 2008 slog; Gingrich might do the same for Romney. Or Romney and Gingrich might destroy each other, with Paul and Santorum, if he remains in the race, inflicting additional wounds on the eventual nominee. Arguably, there are no more presidential tries left for any of the Final Four — it’s now or never. That means no one will hold back.