If Hillary Clinton had won the presidency — and she took the popular vote by nearly 3 million — the narrative of the 2016 election would be far different. Rather than the storyline being Donald’s Trump triumph in the heartland, with its beleaguered blue-collar workers, the emphasis now would be on the Democrats’ ongoing success in metro America, with its large share of the nation’s growing minority population. The conventional wisdom would surely be that the Democrats were likely to control the White House for years to come.

That still might happen, and the 2016 presidential election may ultimately be viewed as an aberration that will be difficult for the Republicans to replicate. As it was, the election was a split decision — Clinton taking the popular vote, Trump the all-important electoral vote.

In the process, both candidates played to their party’s strengths, with an important caveat or two that made the 2016 election both different and noteworthy.

Clinton rolled up the vote in traditional Democratic bastions: major urban centers, high-tech areas, academic communities, minority strongholds (African American and Hispanic, in particular), and state capitals with their sizable government workforces. But she also extended the Democrats’ recent success in the suburbs, long a competitive sector of the electorate.

Trump, for his part, scored big in the usual Republican preserves: rural and small-town America, retirement communities, heavily white counties, and those with military installations. He also made important inroads in historically Democratic industrial areas. Among the counties that he drew into the Republican column were Macomb County (MI), Luzerne County (PA), and Kenosha County (WI).

Macomb County, where reporters often go in search of blue-collar “Reagan Democrats,” has become a national bellwether of sorts, voting for Obama both times he ran for president and Republican George W. Bush in 2004. In contrast, Luzerne County had not bolted from the Democrats since 1988, nor Kenosha County since Richard Nixon trampled George McGovern in 1972. All three counties, plus a number of other blue-collar ones that Trump carried, were critical to his cracking the Democrats’ supposedly impregnable “blue wall” in Michigan, Pennsylvania, and Wisconsin.

As for Clinton, she pushed the Democrats’ reach deeper into suburbia, flipping such counties as Cobb and Gwinnett outside Atlanta, Chester outside Philadelphia, and Orange in southern California from the Republican side in 2012 to the Democratic column in 2016.

Pennsylvania’s Chester County had voted for Barack Obama in 2008. But Cobb and Gwinnett counties had not voted for a Democrat since 1976, when Georgian Jimmy Carter first ran for president. And Orange County, the quintessential home of Sun Belt conservatism, last voted Democratic for president in 1936, at the height of Franklin D. Roosevelt’s New Deal.

Antipathy to Trump was no doubt a factor in the Democrats’ success in the suburbs, but so was a growing minority population in many of these counties. Orange County, for instance, which was barely 20% minority in 1980, was majority-minority by 2010.

Yet there was also a feast or famine quality to the Clinton and Trump votes. Many counties in rural America did not give Clinton even 25% of the vote, and sometimes far less than that. It helped to make her beatable in states that she was counting on winning.

On the other hand, in a number of the country’s major urban centers, Trump quite simply tanked. He captured barely one-third of the vote in Florida’s heavily Hispanic Miami-Dade County, and less than one-third of the vote in Ohio’s Cuyahoga County (Cleveland) and Michigan’s Wayne County (Detroit). In Los Angeles County, the nation’s most populous, Trump drew barely 20%, as was also the case in Cook County (Chicago) and Washington’s King County (Seattle). He took less than 20% in his home base of New York City, only 15% in Philadelphia, less than 15% in Boston, under 10% in San Francisco, and less than 5% in his new home, Washington, DC.

Yet in spite of Clinton’s dominance of the major urban centers, her margins were not quite big enough in the kingpins of Michigan (Wayne County), Pennsylvania (Philadelphia), and Wisconsin (Milwaukee County), to carry any of those three pivotal states. Clearly, she was hurt by a lack of enthusiasm for her candidacy among African-American voters, who had been much more eager to vote for one of their own in Obama.

If she had come anywhere close to matching Obama’s 2012 margin in Wayne County, she would have wiped out Trump’s 10,704-vote statewide advantage and carried Michigan and its 16 electoral votes. However, even if Clinton had been able to match Obama’s 2012 margins in Philadelphia and Milwaukee County, it would not have been enough for her to overcome a 22,748-vote deficit in Wisconsin and a 44,292-vote deficit in Pennsylvania. In both states, she would have needed to make up more votes elsewhere.

A closer look at the Pennsylvania results illustrates the problem that Clinton faced. While she slightly underperformed in Philadelphia compared to Obama’s 2012 showing, she over-performed in the Philadelphia suburbs. She swept all four suburban counties (Bucks, Chester, Delaware, and Montgomery) by a combined margin of nearly 190,000 votes, 65,000 votes better than Obama’s suburban advantage four years earlier.

That gave Clinton a lead of more than 660,000 votes heading out of the Philadelphia metro area. Add an edge of nearly 110,000 votes for Clinton in Pennsylvania’s other major population center, Allegheny County (Pittsburgh), and she had an impressive lead of more than 770,000 votes — 65,000 votes larger than Obama’s in 2012 — to withstand a Republican counterattack in the rest of the state.

Obama had been able to do so easily, as Romney could trim only 400,000 votes from Obama’s lead in the vast swath of Pennsylvania outside the Philadelphia and Pittsburgh areas. But the Trump forces concentrated on the state’s interior, with its small and medium-sized cities, old industrial centers, small towns, and rural terrain. Much of the resource-rich territory had seen better days economically and was tailor-made for Trump’s pledge to “Make America Great Again.” While Romney carried seven counties in Pennsylvania with at least 70% of the vote, the number for Trump was 23.

The result was a Trump margin of more than 800,000 votes outside the Philadelphia and Pittsburgh areas, enough for a narrow statewide win. It was the first time that Republicans had carried the Keystone State’s electoral votes since 1988, and they did it with a different playbook than then. In the 1980s and before, the Republicans’ path to victory in Pennsylvania often started by building a big lead in the Philadelphia suburbs. Not so with Trump, who won both the state and the White House by following his own version of the path less traveled.

What follows is a look at how Clinton and Trump did, respectively, in different types of counties across the country. While 2016 was not that much different nationally than 2012 — the Democratic candidate won by about two points nationally instead of by four — there were wild swings at the state and county level that, taken together, allowed Trump to capture the presidency.

2016 results as seen through different types of communities 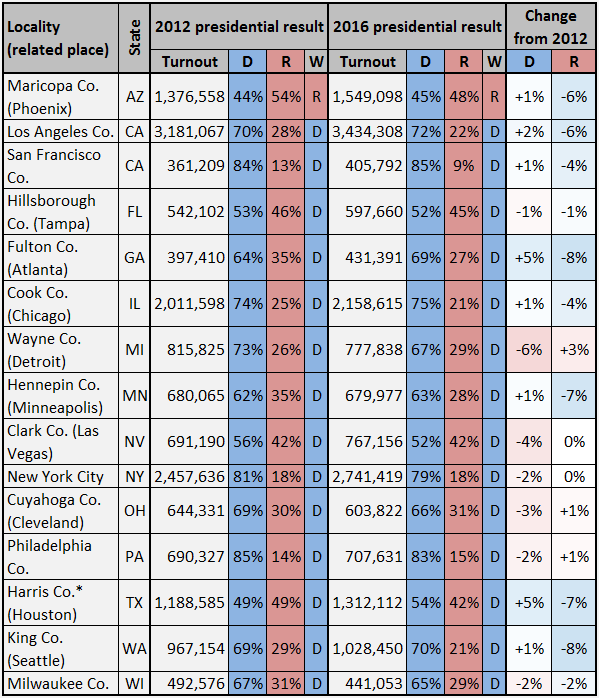 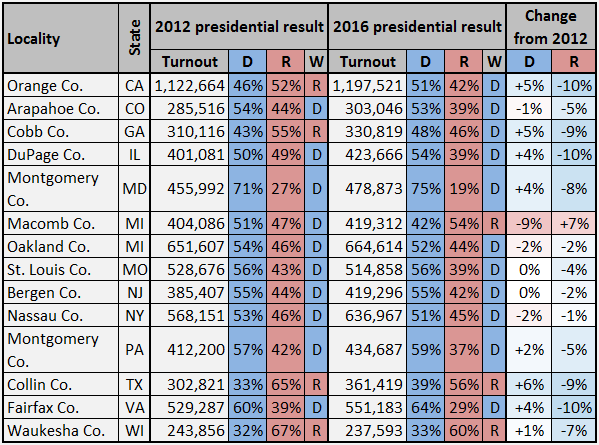 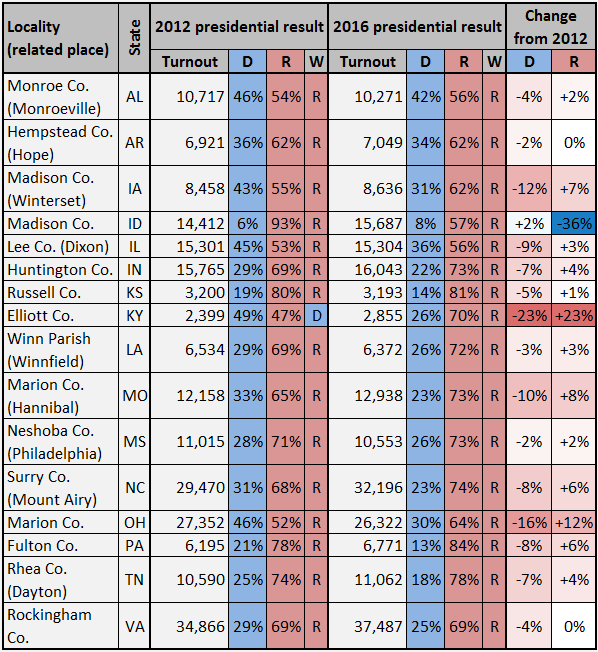 Group 2: The old and new economies 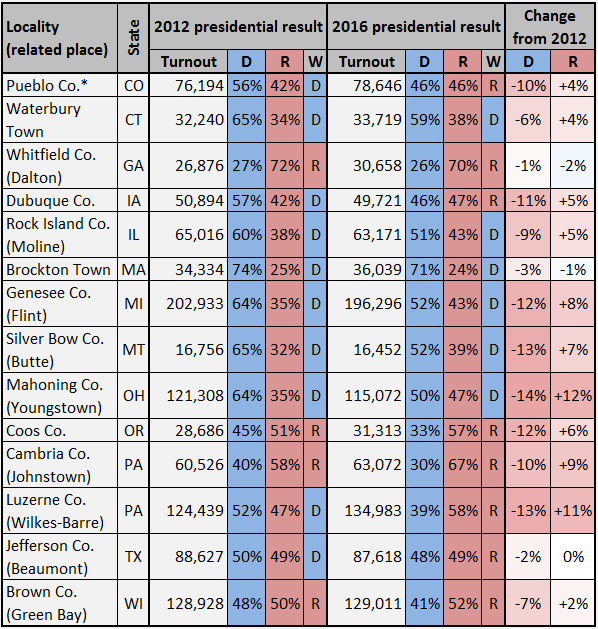 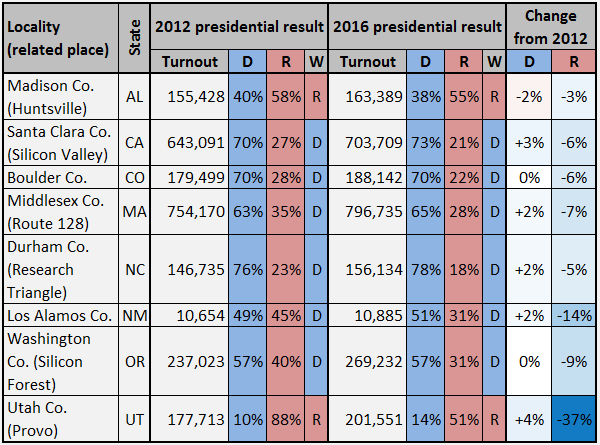 Group 3: The young and the old 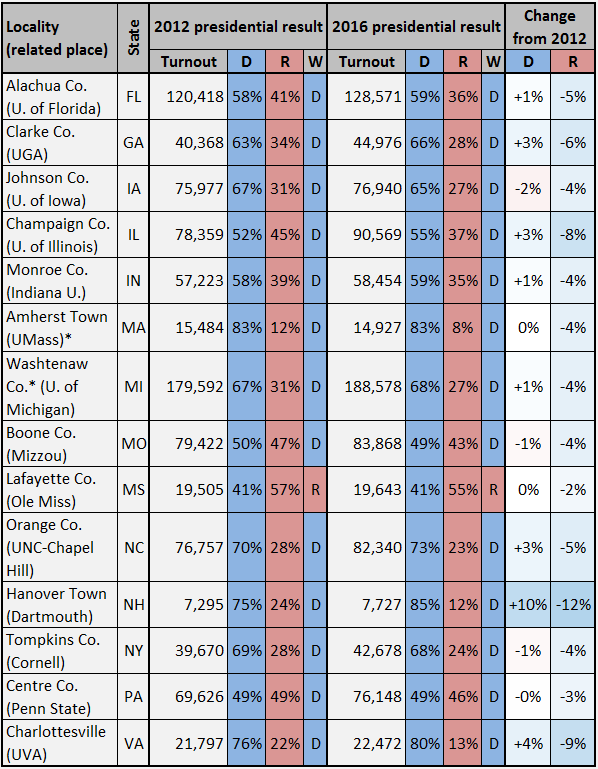 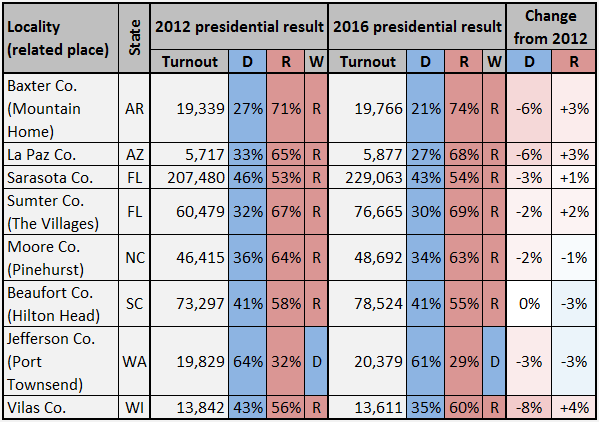 Group 4: A look by race and ethnicity 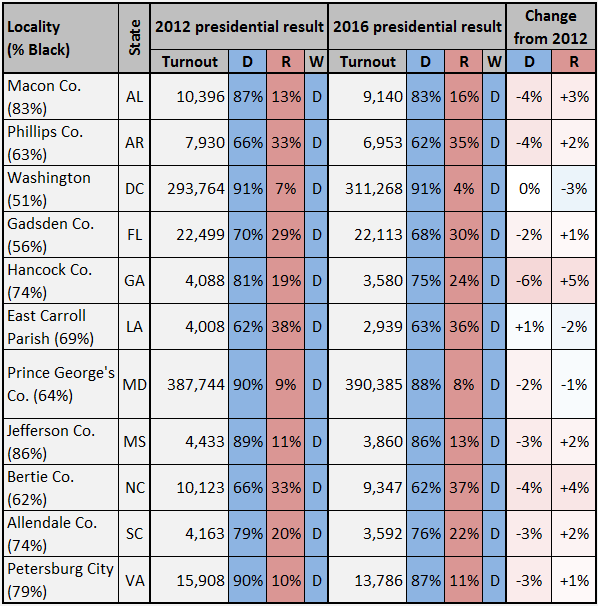 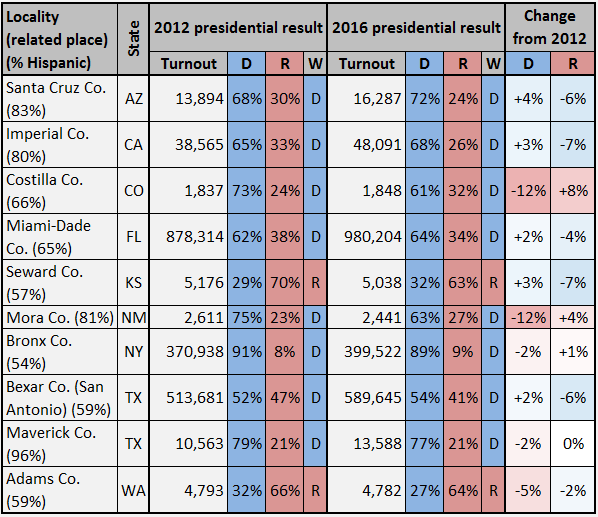 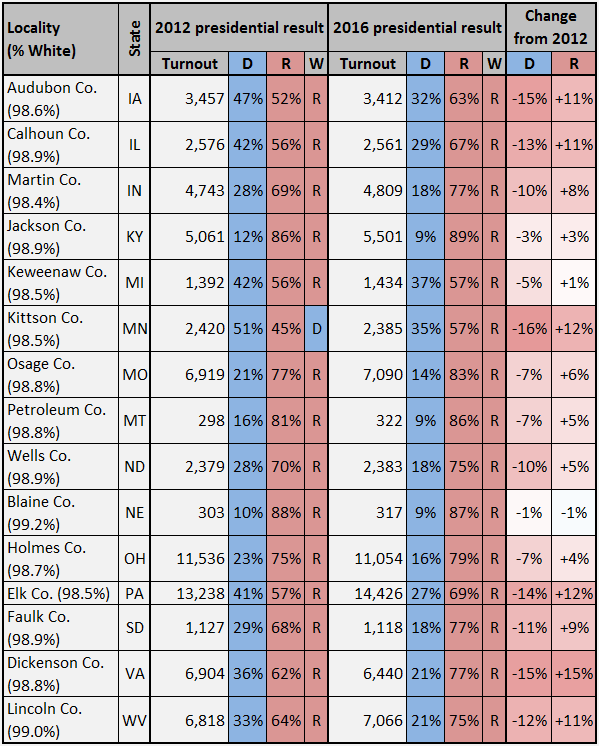 Group 5: The left and the right 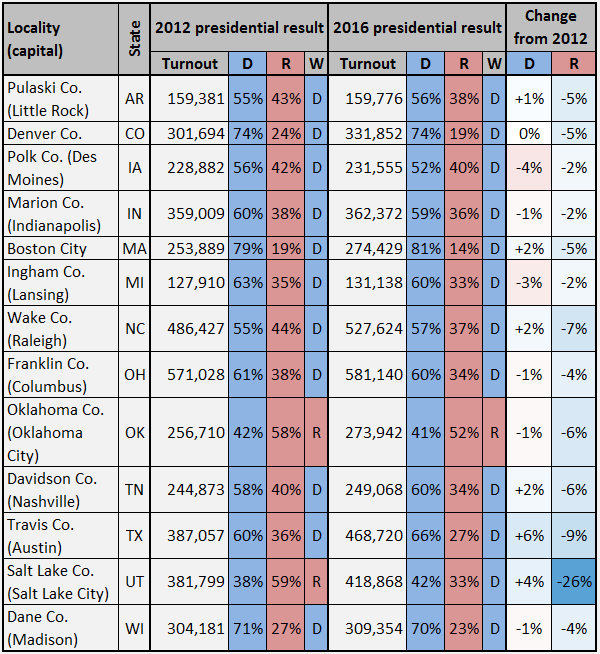 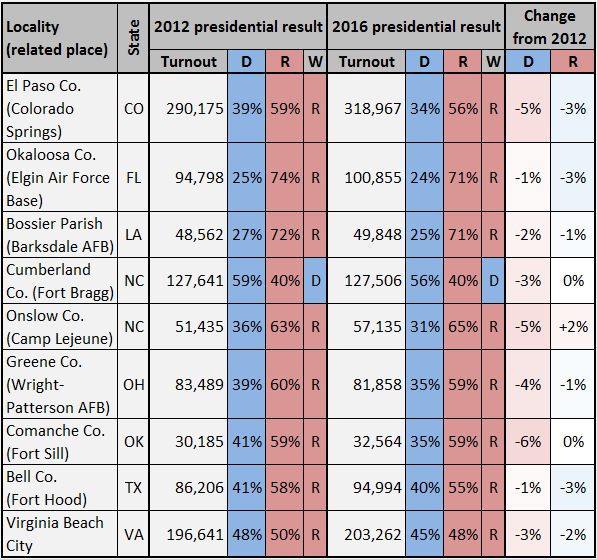