— The coronavirus public health crisis likely will lead to an economic downturn of unknown length and severity.

— Historically, second-quarter GDP growth in the election year is an important variable in predicting how an incumbent president will perform in the fall.

— However, we are in truly uncharted territory, and it’s unclear how the public will respond electorally to an economic downturn forced by a pandemic.

A recession’s threat to a second Trump term

The coronavirus pandemic has upended almost every aspect of American life over the past few weeks, and the 2020 presidential election is no exception. We have already seen candidates forced to cancel rallies, hold a debate with no audience present, and shift their campaign staffs to working online. But the biggest impact of the crisis on the 2020 election is likely to be through its effect on the U.S. economy.

For the 2020 election, I have modified my time for change model by focusing entirely on elections with a running incumbent. That is because, in these elections, both the incumbent’s approval rating in late June and the growth rate of the economy in the second quarter have much stronger effects than in elections without a running incumbent. I have also modified the model to make the electoral vote, rather than the popular vote, the dependent variable because it is the electoral vote that decides the winner. I unveiled this version of the model last April in the Crystal Ball.

Table 1 shows the estimated coefficients for the modified time for change model for the 11 presidential elections since World War II with a running incumbent.

The time for change model does an excellent job of predicting the outcomes of these elections with an adjusted R2 of .92 (this is a measure of how accurately the model predicts what happens on a 0.0 to 1.0 scale). The model predicts the correct winner of all 11 elections. The average prediction error is just 27 electoral votes. According to the results in Table 1, a one-point increase in the incumbent president’s net approval rating (approval minus disapproval) can be expected to yield approximately 2.5 electoral votes. Likewise, a one-point increase in real GDP in the second quarter can be expected to yield approximately 20 electoral votes. Finally, a first-term incumbent who did not take over from a member of his own party, like Donald Trump, can be expected to gain an additional 114 electoral votes compared with a second or later term incumbent — a very substantial advantage. 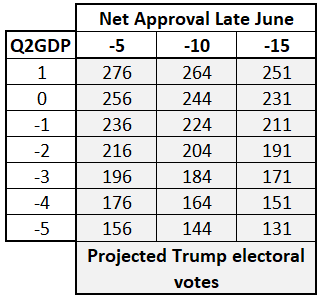 Table 2 presents the conditional forecasts of the electoral vote for President Trump depending on his net approval rating in late June and the growth rate of the U.S. economy during the second quarter. It takes 270 electoral votes to win a presidential election. The results indicate that, despite the huge boost that Trump is predicted to receive as a first-term incumbent, an economic downturn in the second quarter, combined with a net approval rating in negative territory, would very likely doom Trump’s chances of winning a second term. The only scenario here in which Trump would be favored to win a second term would be modest economic growth combined with a small improvement in his net approval rating, which has been stuck in the vicinity of -10 for many months according to the FiveThirtyEight average. The model suggests that a major recession would likely result in an Electoral College landslide for Trump’s Democratic challenger, especially if it is accompanied by a further decline in the president’s approval rating.

Based on the results of presidential elections since World War II with running incumbents, a president with an upside-down approval rating and an economy in recession would have little chance of winning a second term in the White House. If President Trump’s net approval rating remains where it is now or declines further, and if the recession is severe, with real GDP shrinking by three points or more in the second quarter, the result could well be a defeat of landslide proportions.

A few caveats are in order here. Voters may not hold an incumbent president responsible for a recession brought on by an unforeseeable disaster like the coronavirus pandemic — although they may hold him responsible for the government’s response to the pandemic, which is a story that is still being written.

Moreover, in our current era of deep partisan polarization, events like recessions may not have as great an impact on an incumbent’s electoral fortunes as they did in the past. We have seen that President Trump’s approval rating has been remarkably stable due to almost unwavering support from his fellow Republicans and equally unwavering opposition from Democrats.

On the other hand, polarization might also mean that an incumbent, especially one who makes little effort to appeal to voters outside of his own party’s base, might not receive the full benefit of incumbency, which depends on the ability of an incumbent to attract votes across party lines.

Finally, the fact that our forecasts are based on only 11 elections should make us cautious in interpreting these results despite the impressive accuracy of the model.

Overall, one of the best arguments in favor of the president winning a second term has been strong economic performance for much of his term. The public health crisis seems very likely to depress that performance for at least the next few months. This poses an electoral threat to the president, which the model vividly demonstrates.