Skip to content
Home
/
Democrats’ Dilemma: Ideology, Electability, and the 2020 Presidential Nomination in Iowa and the Nation

— The Democratic electorate has been getting more liberal, although at the same time, Democrats are not necessarily prioritizing ideology as they select a presidential nominee.

— Over time, both Democrats and Republicans have expressed increasingly negative views of the other party’s presidential nominee.

Voters in primary elections generally have two major goals: advancing their policy preferences and winning the general election. This can lead to a dilemma when these goals are in conflict.

For many voters in the 2020 Democratic presidential primaries and caucuses, that dilemma is very real. That is because of two features of this year’s Democratic contest: the wide range of ideological choices offered by the leading candidates and the extreme urgency for most Democratic voters of defeating the incumbent president: Donald Trump.

All of the major candidates currently seeking the Democratic nomination are proposing policies that place them well to the left of the Republican incumbent and even, in many cases, to the left of the previous Democratic president. Nevertheless, the candidates occupy a wide range of ideological views, from self-avowed socialist Bernie Sanders and Elizabeth Warren on the left to Pete Buttigieg, Amy Klobuchar, and Joe Biden, who are closer to the center. Thus, it is common to refer to the candidates in terms of the ideological “lanes” that they appear to be running in. Sanders and Warren are said to be running in the “left lane” while Buttigieg, Klobuchar, and Biden, along with self-funded billionaire Michael Bloomberg, are said to be running in the “center lane.”

The good news for the two candidates running in the left lane — Sanders and Warren — is that Democratic voters have been moving to the left since at least the 1990s. Gallup poll data displayed in Figure 1 show that between 1994 and 2018, liberal identifiers increased from a quarter of Democratic voters to just over half while moderates fell from 48% to 34% and conservatives fell from 25% to 13%. A similar trend is evident among Democratic caucus participants in Iowa. According to entrance poll data, between 2008 and 2016, the share of caucus goers describing themselves as very liberal rose from 18% to 28%, while the share describing themselves as either moderate or conservative fell from 46% to 32%. 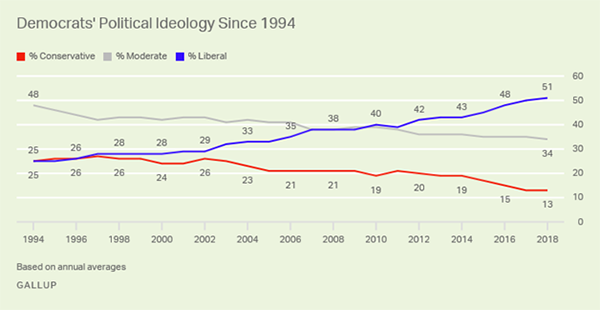 But nominating a candidate who reflects their ideological preferences is not the only, or even necessarily, the most important concern this year among Democratic voters. For many Democrats, perhaps a majority, the biggest concern is finding a candidate who can defeat Donald Trump. While winning the general election is always an important goal for primary voters, it is especially salient this year for Democratic voters because of the intense dislike that many of them feel toward the president. This is readily apparent in Figure 2, which displays the trend over time in the average rating of Democratic and Republican presidential candidates on the American National Elections Studies feeling thermometer scale by Democratic voters. On this scale, zero is the lowest possible score, 50 is described as a neutral score, and 100 is the highest possible score. 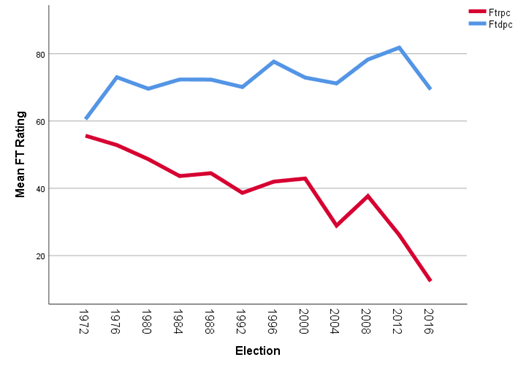 The data in Figure 2 show that there has been a fairly steady decline in Democrats’ ratings of Republican presidential candidates over the past several decades. This decline is part of a larger trend — the rise in affective polarization within the American electorate. A similar decline is evident in Republicans’ ratings of Democratic presidential candidates and in Democrats’ and Republicans’ ratings of the opposing party. However, the average rating of Donald Trump by Democratic voters in 2016 was by far the lowest for any Republican candidate in the entire series going back to 1972. Trump received an average rating of 12 degrees among Democratic voters with 57% giving him a rating of zero, the lowest possible rating on the scale.

The data in Figure 3 show that the decline in feeling thermometer ratings of Republican presidential candidates by Democratic voters has occurred across all ideological groupings. Liberals consistently rate Republican candidates lower than moderates or conservatives, but the average rating of Donald Trump by conservative Democrats in 2016 was substantially lower than liberal Democrats’ ratings of Republican candidates like Richard Nixon in 1972 or Gerald Ford in 1976. 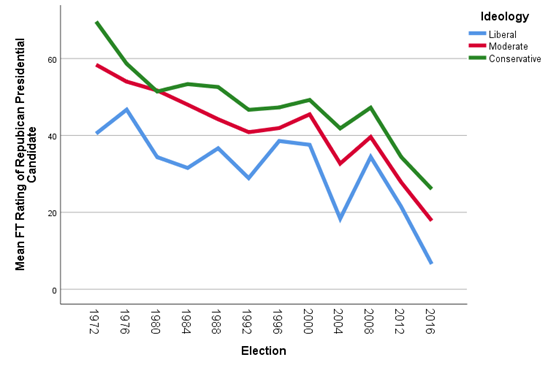 Opinions of Donald Trump among Democrats have not improved since 2016. Data from the Gallup Poll, which has been tracking opinions of presidential job performance since the Truman administration, show that Trump has been the most polarizing president in the history of modern public opinion polling. During his third year in office, Trump received an average approval rating of 7% from Democrats versus 89% from Republicans. Moreover, the large majority of Democrats don’t just disapprove of Trump’s performance — they strongly disapprove. In a Jan. 8-12, 2020 Quinnipiac Poll, for example, 95% of Democrats disapproved of Trump’s performance with 89% disapproving strongly.

This finding raises an important question: How do primary voters and caucus attendees assess electability? Clearly, a wide variety of characteristics could affect a candidate’s ability to win the general election against the incumbent. At various times during the campaign, candidates and journalists have suggested that a candidate’s age, gender, race, sexual orientation, political experience, and debating skills could be relevant here. However, from the standpoint of political science theory, the characteristic that has received the most attention as a potential influence on electability is ideology.

According to the median voter theorem, if ideological preferences are normally distributed, in a two-party system like the United States, the ideal location for a candidate seeking to maximize electoral support is very close to the center of the distribution. And while some candidates have argued that taking more ideologically extreme positions can improve electoral performance by energizing and turning out party supporters, political science research has generally supported the median voter theorem — and so do most Democratic voters.

Along the same lines, the Gallup Poll has periodically asked Democratic voters to indicate the preferred ideology of their party’s presidential candidate. The results for 2007, 2015, and 2019 are displayed in Table 2. Despite the fact that over this time period there was a marked increase in liberal identification among Democratic voters, there was no increase in the preference for a liberal nominee. In 2019, only a third of Democratic voters indicated that they preferred a liberal nominee against Trump, while two-thirds preferred a moderate or conservative nominee.

Table 2: Preference of Democratic voters for ideology of party nominee

Thus far, former Vice President Joseph Biden seems to be the principal beneficiary of the concern among Democratic voters with choosing a candidate who can defeat President Trump. In a Jan. 16-19, 2020 CNN Poll, a national sample of Democratic voters was asked which Democratic candidate they agreed with the most on the issues and which one they felt had the best chance of beating Trump. When it came to issue agreement, Bernie Sanders was the clear frontrunner. The Vermont senator and self-described socialist was favored by 30% of Democrats followed by Biden with 20%, Warren with 15%, and Buttigieg with 10 percent. When it came to electability, however, the former vice president led by a wide margin. Biden, running as a less liberal alternative, was favored by 45% of Democrats followed by Sanders with 24%, Warren with 8%, and Bloomberg with 7%.

One of the surprises of the 2020 Democratic presidential race has been the durability of the support for Biden. Despite some poor-to-mediocre debate performances, lackluster fundraising, and frequent attacks by other candidates for his past positions on issues ranging from the invasion of Iraq to entitlement reform, Biden has continued to lead in most polls of Democratic voters nationally and in several of the early states. Part of the explanation is clearly Biden’s continued strength among African-American voters and among the still large group of moderate-to-conservative Democrats. In addition, however, Biden appears to be tapping into the deep concern of many Democrats with defeating President Trump in November. This may help to explain why a Jan. 20-23 Echelon Insights Poll of Democratic voters across the nation found that in a one-on-one contest, Biden led Sanders by a fairly wide 54% to 38% margin.

To some extent, support for Biden from Democrats concerned about electability may be based on evidence from recent national and state polls. Table 3 compares the electoral performance of Biden and Bernie Sanders in matchups with President Trump. I compared Biden with Sanders because Sanders offers the clearest ideological contrast with Biden and because he is just about as well-known as Biden.

Table 3: Polling averages of Biden and Sanders vs. Trump 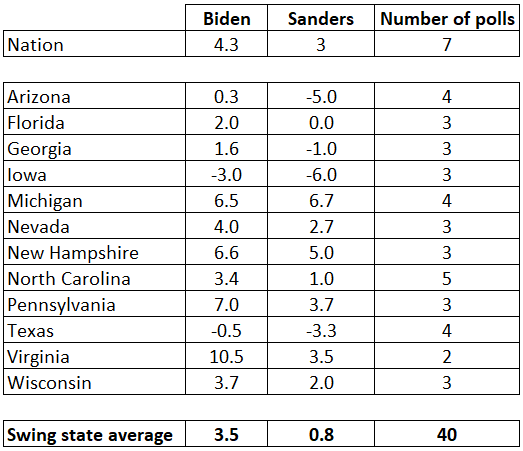 Note: Based on polls including matchups between Trump and both Biden and Sanders.

The evidence displayed in Table 3 provides some empirical support for the belief of many Democrats that Biden has a better chance of defeating Trump than Sanders. On average, Biden outperforms Sanders in matchups with Trump nationally and in 11 of 12 potential swing states for which polling data are currently available. The difference is slightly larger in the swing state polls than in the national polls. And the differences between the two Democratic candidates are generally small. Thus far, in the national polls and in most of the swing states, including the three that were critical to Trump’s Electoral College victory in 2016 — Michigan, Pennsylvania and Wisconsin — both Sanders and Biden are leading Trump.

The fact that the differences in general election performance between Biden and Sanders are fairly small, especially in the national polls, is not surprising given the deep partisan divide that exists over the incumbent. A presidential election with a running incumbent like 2020 is largely a referendum on the incumbent. The vast majority of Democratic voters would be expected to support any of the leading Democratic challengers over Trump. Likewise, the vast majority of Republican voters would be expected to support Trump over any Democratic challenger.

But the election is also likely to be very close, like most recent presidential elections. That means the outcome will almost certainly be decided by a small group of persuadable voters in a handful of swing states. And that is where these findings suggest that the Democratic nominee could make a difference.