The two major parties have done their job in terms of setting the parameters for the 2012 presidential nominating process. Now, it is time for the states to fill in the blanks. And what they do in that regard over the next few months could go a long way in determining who wins next year’s Republican presidential nomination.

Basically, the governors and state legislatures – often in conjunction with the state parties – have two major questions to answer: When to hold their event, and what that event should be – a low-turnout caucus or a higher turnout primary.

In short, will the nominating process next year be heavily “front-loaded,” as it has been in the recent past, which rewards the candidate with early momentum and concludes by the Ides of March?

And with many states facing budget deficits, will there be a move away from rather pricey primaries to relatively inexpensive caucuses, the latter a process that often boosts candidates with passionate support over those with broader-based appeal?

Basically, Republican rules are agnostic on the question of primaries versus caucuses, but very clear on the desire to significantly lessen the pileup of states at the beginning of the nominating calendar. National GOP rules for 2012 are designed to slow the rush to judgment that has characterized recent Republican nominating contests and to give more states a chance to have their voices heard.

Both national parties have agreed to push back the start of their nominating process by one month from 2008. That year, Iowa and New Hampshire voted in the shadow of New Year’s Day, and by Super Tuesday (Feb. 5), more than half the country had voted. To nearly everyone in the political community, the last nominating season began too early, peaked too soon and, for Republicans, was over much too quickly. John McCain had the nomination wrapped up by early March.

Such an early ending should not occur again next year – so long as the states follow the new rules, that is. No state is allowed to vote in January. Only Iowa, New Hampshire, Nevada and South Carolina will be permitted to vote in February. The rest of the country will be allowed to hold their primary or caucus beginning the first Tuesday in March (March 6, 2012), which will be the new “Super Tuesday.”

In addition, new GOP rules forbid any contests held before April 1 to award all of a state’s delegates to the statewide winner. That could be a major concern to Republican leaders in many early-voting states, who used winner-take-all in the past to attract the interest of candidates and enhance their state’s influence. If their state votes before April 1 next year, it will be required to provide for the division of delegates proportionately among candidates to reflect their share of the vote.

Proportional representation has been a staple of Democratic rules for a generation and was one reason why the 2008 contest between Barack Obama and Hillary Clinton was so long running. But for Republicans, this is new ground. And it is not completely clear yet how the proportional representation requirement for pre-April states will be implemented.

However, to David Norcross, the former chairman of the rules committee of the Republican National Committee (RNC), the change is “majestically simple.” For a decade, Republican rules makers considered an array of complex plans to arrest “front-loading,” including ones where states would vote in inverse order of size. But with the elimination of pre-April winner-take-all events in 2012, many GOP officials hope that they have not only found a simple way to slow down the nominating process but also to encourage states to hold their primary or caucus well after Super Tuesday.

Chart 1. 2012 Presidential Nominating Rules: A Comparison of the Two Parties 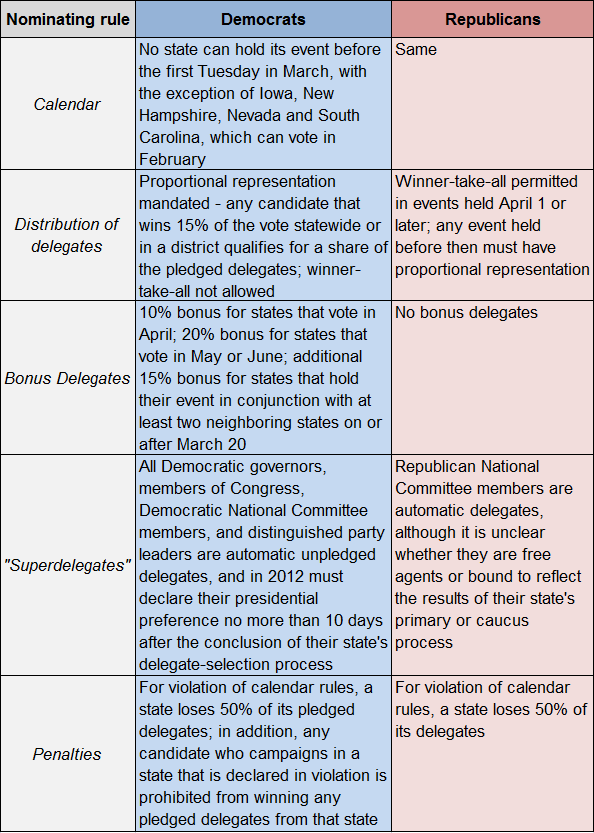 Yet not every state has bought into this line of reasoning. John Ryder, the chairman of the RNC rules compliance committee, still expects there will be “a gaggle, a pride, a covey of primaries” on next year’s Super Tuesday, March 6.

And then there is Florida.

Florida broke ranks in 2008 to hold its primary a week before Super Tuesday and is threatening to do so again next year. Many Sunshine State politicians figure that as a populous, fast-growing swing state, Florida deserves a prominent early spot on the calendar. “We want to go fifth,” Florida GOP Chairman Dave Bitner recently said, according to the Sarasota Herald-Tribune. If that happens, Florida would vote after the four sanctioned February states but before the glut of those voting in early March. As of now, however, Florida’s primary is scheduled for Jan. 31, 2012, which obviously violates the national party’s new rules.

A final decision on the state’s primary date will likely be made early this fall by a 10-member commission stocked by Florida politicians. They appear willing to accept the RNC’s penalty for holding an unsanctioned early event: the loss of 50% of Florida’s delegates as well as the prohibition on awarding the rest on a winner-take-all basis.

A decision by Florida to keep its primary in January, or even to move it back only to early or mid-February, could have even broader consequences. It probably would blow up the entire pre-Super Tuesday calendar, leading Iowa, New Hampshire, Nevada and South Carolina to look at earlier dates for their own events. In other words, there very well could be a repeat of the Christmas and New Year’s campaign in Iowa that we had during the last presidential campaign.

Will the Absence of Money Talk?

As inviting as Republican rules changes may be, an even greater factor that could alleviate “front-loading” next year is the strain faced by state budgets. No longer are many states in position to fund both a free-standing presidential primary as well as a state primary later in the spring or summer to fill out the rest of the ticket.

In California and New Jersey, there are already moves under way to push back the states’ February presidential primaries and consolidate them with June state primaries. (If they stay where they are, they too would be in violation of the rules of both parties.) In Tennessee, there is a bill that would lump the presidential primary with local elections on the first Thursday in May. And in Washington, there is an effort to do away with the primary altogether and elect all the delegates through a caucus process, which supporters say could save the state $10 million.

The last time there was a significant movement from primaries to caucuses was in 1984, when economic and political conditions were largely similar to today. The nation had been wracked by recession and only the Democrats were having a contested nominating fight. (President Ronald Reagan ran virtually unopposed for renomination.)

As a consequence, the number of presidential primaries in 1984 dropped by a half dozen, from 36 to 30. It turned out to be only a temporary downturn, though, as the number of primaries since then has regularly approached and exceeded 40.

Over the years, the relatively low-turnout caucuses have been particularly receptive to candidates with a passionate base of support. Two decidedly ideological candidates, Republican Barry Goldwater in 1964 and Democrat George McGovern in 1972, both used strong showings in the caucuses to nail down their party’s presidential nomination. And in 2008, Obama’s dominance of the caucuses proved critical to his narrow victory over Hillary Clinton for the Democratic nomination. Of more than a dozen states where Democrats held caucuses last time, Obama lost only two – Nevada and New Mexico.

On the Republican side in 2008, no candidate elicited the same voter intensity. Mike Huckabee scored a high-profile caucus victory in Iowa. Mitt Romney won most of the caucus votes that followed. The eventual nominee, John McCain, carried only the caucus action in Washington state. But that was before the emergence of the Tea Party as the most energized part of the Republican Party. A caucus setting may be perfectly suited in 2012 for a cadre of Tea Party activists and the candidate that they support.

All in all, there is a lot to be decided in the months ahead in readying the playing field for the 2012 Republican nominating season. But it is already clear that what emerges will not be a carbon copy of last time, beginning with but not limited to the fact that the whole process is set to begin one month later. “The rules have changed (from 2008) and the process is different,” Ryder said. “If you expect to see the same result just 30 days later, you will be surprised.”

Note: The caucus turnout in Texas was based on an estimate by the Texas Democratic Party. The Democratic primaries in Idaho, Nebraska and Washington were non-binding “beauty contests” and did not elect delegates.
Sources: “America Votes 28” (CQ Press) for 2008 Democratic presidential primary results; “The Rhodes Cook Letter” (June 2008) for 2008 Democratic caucus results.