— When viewed without a party lens, there is majority support for aspects of the Freedom to Vote Act. But Joe Biden and Donald Trump voters express dramatically different opinions on this topic, and, by association, they have divergent viewpoints on the debate currently occurring in the U.S. Senate. (see Figure 1 below)

— Opinions are even more polarized on legislation currently being considered at the state level. Biden voters perceive these efforts as tantamount to legalizing voter suppression and giving state legislatures a free hand to prevent certification of elections based on the suspicion of fraud alone. Trump voters view these efforts as necessary to protect against voter fraud and ensure the integrity of our elections. (see Figures 2 and 3 below)

— Donald Trump and Trumpism sit at the center of the “why” behind the conflicting and contrasting viewpoints on this vitally important issue. Support for protecting and expanding access correlates with the belief that the reelection of Donald Trump would have resulted in lasting harm to the United States. These voters are programs voters who exhibit what we are calling a “multi-cultural populism” that supports government doing more to help people and views ongoing conflict as a harbinger of bad things to come. Conversely, support for a more restrictive view of voting rights and access correlates with the belief that there was a hidden “deep state” effort to undermine the presidency of Donald Trump. These are values voters who exhibit “nationalistic populism” leanings, are motivated by a shared identity, and embrace most aspects of what is commonly referred to today as Trumpism.

As we noted last week, there are differing views among Biden and Trump voters on certain aspects of the Freedom to Vote Act, a Democratic-backed election law proposal that Republicans blocked in the Senate recently. Our findings are in Figure 1.

Figure 1: “Strong” support for aspects of the Freedom to Vote Act 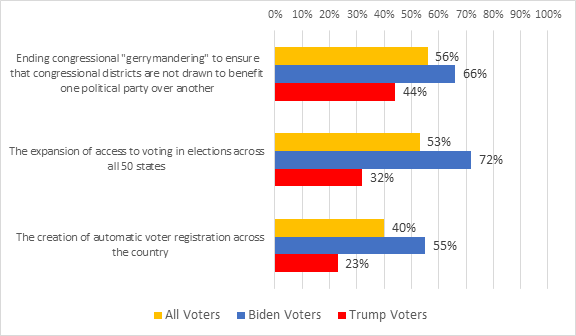 Further, there are deep, partisan cleavages that yield significant differences between Biden and Trump voters on the intent of legislation currently under consideration at the state level.

By last count, literally hundreds of bills have been introduced across many states with the goal of impacting and changing election rules. Some present as making voting easier and more accessible — such as expanding access to early and mail voting and making voter registration easier. Others present as more restrictive — such as making it more difficult to vote early or by mail, and enacting stricter ID requirements.

We asked Biden and Trump voters to indicate their own opinions regarding these potential new laws, and whether they agree or disagree that state legislatures should be able to prevent their state’s election officials from certifying an election if members of the legislature say they suspect there was illegal voting activity.

Overall, a slight majority say the intent of legislation currently being considered at the state level is voter suppression (52%), and not making elections more secure (48%) — see Figure 2.

But the overall numbers mask exceptionally large partisan differences. Most Biden voters (70%) say the true purpose of these bills is to make voting more difficult for voters who are more prone to vote against the sponsoring party’s candidates (vs 30% of Trump voters). By contrast, 69% of Trump voters say these new laws are necessary to prevent voting fraud and protect the integrity of elections (vs 31% of Biden voters). 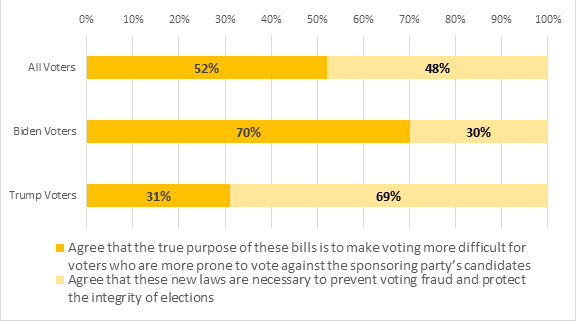 And when thinking about the power that state elected officials can wield over national elections, 63% of Biden voters disagree with enabling state legislatures to prevent their state’s election officials from certifying an election if members of the legislature say they suspect there was illegal voting activity. Among Trump voters, 70% express agreement that state legislatures should have the option of preventing elections from being certified on the suspicion of fraud. 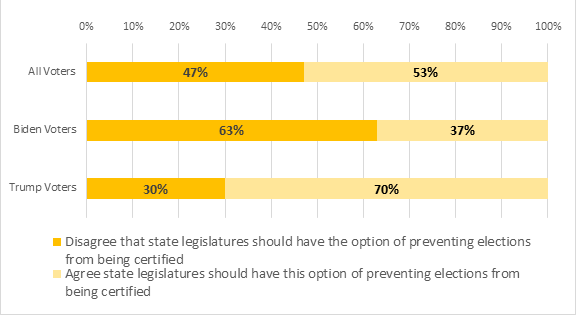 The why behind the numbers: Donald Trump and Trumpism

To uncover what drives these starkly different positions, we ran an analysis amongst 2020 Biden and Trump voters to identify and understand the underlying attitudes and opinions that associate most closely with responses to the voting rights questions discussed above.

These results show that, overall, those who support protecting and expanding voting rights exhibit multi-cultural populist and progressive leanings that are bolstered by shared values, view ongoing conflict as a harbinger of bad things to come, and fear Donald Trump and what he represents. Support for positions associated with protecting and expanding voting rights and access correlates with positive reactions to many aspects of President Biden’s economic and infrastructure agenda; with support for President Biden’s renewed alliances approach (vs. Donald Trump’s America First approach); with their belief that the reelection of Donald Trump would have resulted in lasting harm to the United States, and that President Biden won the election fairly. These are “hard infrastructure, human infrastructure” programs voters — in other words, voters who want government to do more to proactively advance progress in these areas.

Conversely, those who adhere to a more restrictive view of voting rights exhibit a nationalistic populism and embrace most aspects of what is commonly referred to today as Trumpism. Support for positions typically associated with making it more difficult for people to vote correlates with adherence to conspiracy beliefs; adherence to authoritarian and anti-democratic beliefs; anti-immigration and anti-multicultural positions; anti-masking sentiments on COVID-19; and pro-Trump (strongly approve of his job performance and of him now), and pro-traditional values (that “old-fashioned ways” and “old fashioned values” still show the best way to live) positions. These are “Traditionalism, Trumpism” values voters — in other words, voters motivated by a shared identity who gravitate towards positions that speak to their values and, especially, their concerns about where the country is headed and their role in it.

Trumpism and the polarization of our elections

Donald Trump plays an outsized role in coloring voter perceptions of the election law changes being debated today at the federal and state level. That is an essential finding of our look into opinions on voting rights and access.

On the one hand, support for expanding access correlates with the belief that the reelection of Donald Trump would have resulted in lasting harm to the United States. On the other hand, support for a more restrictive view of voting rights and access correlates with the belief that there was a hidden “deep state” effort to undermine the presidency of Donald Trump.

As we have detailed in previous releases, the “Trump Effect” — and the other side’s response to it — is real and pervasive. It is affecting and animating America’s fissures across a range of issues:

— The fear and distrust Biden and Trump voters exhibit for each other which leads them to embrace conflict over compromise and finding ways to live together.

— Conflicting attitudes on race and immigration that yield deep and divisive personal concerns and policy tensions that serve as fuel for our national divide.

— A willingness amongst Biden and Trump voters to countenance anti-democratic tendencies if needed to serve their priorities.

— And a national split on election laws and the role they play in ensuring our elections are both free and fair, something the future of our representative democracy clearly depends on.

America is at the ledge. And while we have and will highlight targeted pathways to building public civility and inspiring public trust, what’s clear is we need to get started on these changes as soon as possible. Otherwise, we will find that we’ve waited until it is too late, that whatever advantages our representative democracy promised have slipped away, and that we are playing on the more divisive and dangerous terms — and their potential to give rise to politically motivated violence and upheaval — that increasingly dominate our national discourse. This is not a legacy that any of us should be comfortable bequeathing to the generations of Americans to come.