Youngkin’s victory was not a shock, at least to us — we noted in the Crystal Ball a couple of weeks ago that some of our Republican sources believed Youngkin was the favorite — but this was also an unusual contest with unusual rules. The Republican Party of Virginia opted to nominate its statewide candidates through an “unassembled convention.” Participants registered as delegates and cast ranked-choice votes at about 40 voting sites across the commonwealth. While roughly 53,000 registered to be delegates, just over 30,000 raw votes were cast. That’s close to four times the number of participants in the most recent Virginia gubernatorial convention (2013), but less than a tenth of the turnout in the most recent Republican gubernatorial primary (2017). Votes were cast on Saturday, so it took a few days to compile the results.

We likely would have upgraded Democratic chances in the Virginia gubernatorial race had Chase won the nod. In a nomination contest that Crystal Ball Editor in Chief Larry J. Sabato called a battle among the “Trumpy, Trumpier, and Trumpiest,” Chase probably was Trumpiest, which would have made her a hard statewide sell in a Democratic-trending state that Joe Biden won by 10 points, the biggest Democratic statewide edge for president since the days of Franklin D. Roosevelt.

That is not to say Youngkin is moderate — he ran to the right in the primary season, just like the other major candidates — but he may have an easier time pivoting to the center for the fall campaign. He has no past elected officeholding experience — and, thus, no legislative voting record — and he possesses considerable personal resources to put behind whatever message he comes up with for the fall. On the other hand, Youngkin took very conservative positions during the campaign and hosted Sen. Ted Cruz (R-TX) for his personal endorsement and stumping. Cruz isn’t known for backing moderates. Donald Trump himself endorsed Youngkin this morning.

The Democratic primary is now less than a month away (June 8), and former Gov. Terry McAuliffe (D-VA) remains well ahead of a divided field of challengers. McAuliffe isn’t a moderate either, although Democratic primary voters have more left-wing options in their own primary. McAuliffe also is the only member of the incumbent president’s party to win a gubernatorial race in Virginia since 1973, although he did so only narrowly in 2013 against an opponent — then-state Attorney General Ken Cuccinelli — who was widely perceived to be a far right candidate and amidst a scandal involving then-Gov. Bob McDonnell (R-VA). McAuliffe is a stronger, more proven candidate now than he was in 2013, and he was a reasonably popular governor during his term, but Youngkin may also end up being a stronger candidate than Cuccinelli was. Time will tell.

While there are other races to watch throughout 2021 for signs about the national political environment, such as U.S. House special elections, the upcoming Virginia state elections might be the best sign we’ll get this year as to which way the political winds are blowing. Specifically, Virginia is dotted with the kinds of highly educated and diverse suburban areas that have zoomed toward the Democrats in recent years. It also has a rural, white western region where Donald Trump performed very well even in defeat. If the GOP can make a comeback in the suburbs in 2022, the first signs may come in the November results this year, and Republican performance in the rurals also will help measure Trump Republican enthusiasm without the man himself on the ballot.

Brood X cicadas are emerging in parts of Northern Virginia and elsewhere this spring. They’ve been out of sight and out of mind for 17 years. The Virginia Republicans have not won a statewide race in a dozen years. If Republicans don’t win something this year, they risk extending their dry spell to cicada-like lengths.

We continue to rate the Virginia gubernatorial race as Leans Democratic.

While it was certainly interesting to see which states gained or lost seats, some of the most surprising states were the ones that didn’t see any changes.

Though most expected Minnesota to drop down to seven districts, the state will retain the same eight seats that it’s had since the 1960 census. In fact, for the second consecutive census, Minnesota’s 8th district was the 435th seat awarded.

What could this mean for redistricting? Under a seven-seat Minnesota map, it was thought that first-term Rep. Michelle Fischbach (R, MN-7) could be forced into a primary with another Republican, perhaps Reps. Tom Emmer (R, MN-6) or Pete Stauber (R, MN-8). As Emmer chairs the National Republican Congressional Committee, she’d have been an especially heavy underdog to him (though, in 1992, NRCC chairman Guy Vander Jagt was defeated in a primary, as redistricting altered his western Michigan seat). Fischbach’s geographically vast district has seen slow growth over the past decade, so it would have been the easiest to cut. Any of those members could still be double-bunked, but that situation is looking much less likely now, as it wouldn’t be mandated by the loss of a seat.

If Republicans in outstate Minnesota are feeling some relief after the Census Bureau’s announcement, so are some Twin Cities-area Democrats. Reps. Angie Craig (D, MN-2) and Dean Phillips (D, MN-3) both hold districts that would have likely expanded into redder turf on a seven-district plan. Phillips’ district, which is essentially coterminous with the blue-trending Minneapolis suburbs, seems fairly secure, but Craig represents a Donald Trump 2016/Joe Biden 2020 district south of St. Paul.

The Minnesota apportionment announcement seems especially beneficial to Craig. Last month, her 2020 opponent, Marine Corps veteran Tyler Kistner, got into the race for a rematch. While he was outraised 5-to-3 in 2020, Kistner has an attractive biography and kept that race close. Under the current map, MN-2 is something of a bellwether for the state: Biden carried it by 52%-45%. Craig was reelected by a slimmer 48%-46%, and seemed to bleed votes to a (deceased) pro-marijuana candidate — though the fall election went through, the election was nearly postponed to February because of a bizarre state law.

According to 2019 estimates, fewer than 9,000 MN-2 residents (out of its over 700,000) would need to be removed from the district, so minimal changes could be in order. In 2020, over 60% of the votes cast in the district came from Dakota County, where both candidates live — whatever the new version of MN-2 looks like, it seems a good bet that Craig and Kistner will run against each other in a district anchored there.

Since the 1980 round of redistricting, neither side has had full control of the redistricting process in Minnesota, and that looks to be the case again (Democrats hold the governorship and state House, but the state Senate is controlled by Republicans). After the 2000 census, Minnesota was in the curious position of having an independent governor, a Democratic state Senate, and a Republican state House. After the parties couldn’t agree on a plan, a special panel of judges stepped in to draw the lines. As the 2004 edition of the Almanac of American Politics quipped, the judges came up with a plan that the governor and legislative leaders would have probably agreed on “if someone had put a gun to their heads.” In 2012, when a Democratic governor and Republican legislature couldn’t agree on a plan, the map was again drawn by judges — they made few changes to the prior map.

It’s also possible, with the state’s congressional delegation at an even 4-4 partisan split, that a bipartisan incumbent protection plan could pass, without the involvement of the courts. In the context of MN-2, moving Scott County, an exurban Republican county, into MN-1 and replacing it with Olmsted County (Rochester), would be a switch beneficial to incumbents of both parties. This type of plan would turn MN-2 in a district that Biden carried by nearly 10%, strengthening Craig, while bumping Trump’s margin in MN-1 up to 13%, helping insulate Rep. Jim Hagedorn (R, MN-1) from future Democratic challenges. However, because Craig would still hold the more marginal district, Republicans may have less incentive to push for a pro-incumbent map. The state’s other six members should be relatively safe.

Some Democrats will complain that Republicans have a seat at the redistricting drawing board because of the presence of marijuana party candidates on the ballot last year. In fact, before he died, Adam Charles Weeks, the Legal Marijuana Now candidate in MN-2, acknowledged that he was recruited by Republicans to “pull votes” from Craig. After 2020’s elections, as Republicans came out with a one-seat advantage in the state Senate, Democrats, pointed to state Senate District 27 — a Democratic incumbent lost 49%-44% to a Republican, as a Legal Marijuana Now Party candidate claimed nearly 7% of the vote.

While it’s certainly possible that Republicans could have still won state SD-27 in a two-party scenario, the prevailing consensus seemed to be that a slate of pro-marijuana candidates hurt Democrats in Minnesota. Some precinct-level analysis seems to confirm this.

Though SD-27 has a rural character, its two largest cities are Austin and Albert Lea. As Table 1 shows, about 58% of the votes that the Democrat, Dan Sparks, received districtwide came from those two cities — this should be expected, as even in rural areas, Democrats usually draw on the more populated areas. Likewise, only 42% of Republican Gene Dornick’s votes came from the two cities. But Tyler Becvar, running as a Legal Marijuana Now Party candidate, had a coalition that was slightly more urban than Sparks’ — evidence that they were competing for similar votes.

In MN-7 last year, now-former Rep. Collin Peterson (D) was held to less than 40% against Fischbach. Peterson defied political gravity in this Trump +30% seat for several cycles, but his margins had been dropping since 2012. The Crystal Ball rated the race as Leans Republican, and it wasn’t too surprising to us that Fischbach won the race with 53%. But the presence of two pro-marijuana candidates seemed to hurt Peterson: The third-party share was highest near the Red Lake Indian Reservation, which is heavily Democratic. Peterson would’ve still lost a two-way race, but it’s likely he’d at least have carried more counties (Map 1). 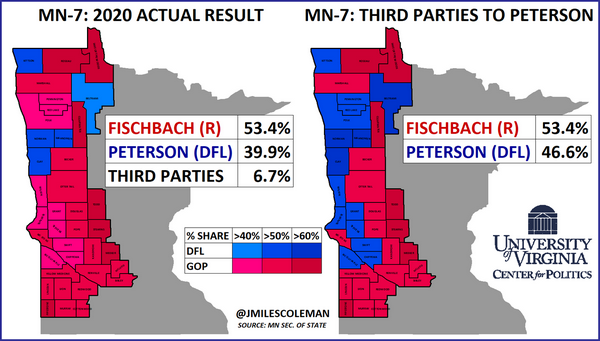 Shortly after the election, and with the (expected) census results in mind, Peterson noted that Fischbach “deserved” to be put into the same district with Rep. Tom Emmer. But looking forward to 2022, Peterson’s disappointment may be Craig’s gain.

The 2020 electorate: More diverse, but less polarized by race

Catalist, a major Democratic data firm, just released a fascinating report on the 2020 electorate that we recommend to political junkies of all political stripes. What Catalist found helps reinforce some of the voting trends revealed in what we saw in the county and precinct-level election results as well as the findings of exit polls released on Election Night.

Table 2 shows Catalist’s calculations of both the demographic makeup of the 2012, 2016, and 2020 electorates as well as the Democratic share of the two-party presidential vote in each of those elections (this excludes third-party votes). Catalist constructed these estimates using its national voter file and supplemented the findings with survey data and other information.

Source: Catalist “What Happened in 2020” report

Notice that Joe Biden won the presidency by doing a bit better with white voters, especially those with a four-year degree, than Hillary Clinton, while doing worse than she did among voters of color. This was particularly true among Latinos, a group that shifted from a roughly 70%-30% Democratic margin in both the 2012 and 2016 two-party vote to a 63%-37% Democratic edge in 2020. This Democratic drop jumps out in the results, not only in heavily Latino South Florida and South Texas, but other places across the country with sizable numbers of Latino voters (our J. Miles Coleman explores this in some depth in his chapter in our recently-released book on 2020, A Return to Normalcy?).

There is plenty more worth exploring in the actual report.

Save 10% on a Political Wire subscription

Our friend Taegan Goddard runs Political Wire, which is a great site for keeping up with what’s going on in politics. He’s offering Crystal Ball readers a 10% discount on an annual membership at the following link: https://politicalwire.memberful.com/checkout?plan=9724&coupon=crystalball.