Skip to content
Home
/
NOW AVAILABLE: A Return to Normalcy? Our Book on the 2020 Election

A Return to Normalcy? The 2020 Election That (Almost) Broke America — the University of Virginia Center for Politics’ new look at the 2020 presidential election and its consequences — is now available through UVA Bookstores, Indiebound, and other online booksellers.

Edited by Crystal Ball editors Larry J. Sabato, Kyle Kondik, and J. Miles Coleman, A Return to Normalcy? brings together what Booklist calls a “stellar coterie of reporters, pundits, and scholars” to “parse the 2020 election via a data-driven set of analytics displayed in useful charts and graphs, drawing conclusions that will satisfy hard-core political junkies and provide a solid foundation for everyone looking ahead to 2022 and 2024.” 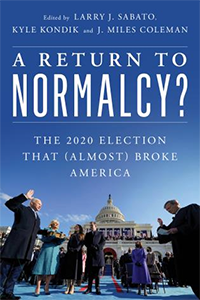 Tonight (Thursday, April 8) at 6:30 p.m. eastern, four of the book contributors will participate in a free virtual forum: “Taking Stock: The Societal Impact of the 2020 Election.” Business Insider‘s Grace Panetta will moderate. She wrote a chapter on the massive expansion of early and mail-in voting necessitated by the pandemic. In it, she notes how President Trump’s criticism of mail-in voting “represented a stark reversal for the GOP because it upended decades of Republican get-out-the-vote strategy — in the process baffling and upsetting numerous Republican candidates and operatives. In states including Arizona, Georgia, Florida, Ohio, Pennsylvania, and Wisconsin, laws establishing no-excuse mail voting had in fact been enacted by Republican-controlled state legislatures—and in some cases signed into law by Republican governors.”

Abramowitz’s wrote on the polarized state of the nation — “The Politics of Good versus Evil.” This polarization manifested in views of former President Trump: “In its final poll prior to the 2020 election, Gallup found that 94 percent of Republicans approved of the president’s performance compared with only 4 percent of Democrats—a remarkable 90-point difference. This was the largest difference in approval between Democrats and Republicans in the long history of the Gallup poll.”

Byler assessed Joe Biden’s path to the Democratic presidential nomination and pondered whether his nomination was inevitable or accidental. He recounts the momentous series of events in which Biden went from primary favorite to seemingly dead in the water to effectively the presumptive nominee, all in the course of several weeks in early 2020. Byler argues that a few tweaks to how the primary season unfolded “would have made this race much closer, and a few more might have changed the outcome entirely.”

And Pisani analyzed the battle for the Senate, which the twin runoffs in Georgia altered from bitter disappointment to stunning triumph for Democrats. As Pisani writes, Democrats took a path to a Senate majority that few anticipated at the start of the cycle as Republicans successfully defended many of their most vulnerable seats but were undone by the Georgia runoffs. The end result was a Senate in which a historically small number of states had bipartisan Senate delegations: “After 2018, only 10 states had split Senate delegations, which was down from 14 split delegations in the previous cycle. With Democratic losses in Alabama and Republican losses in Arizona and Colorado, that number dropped to seven split delegations after 2020 — the fifth election cycle in a row during which the number of split delegations has declined. It’s also the lowest number of split party delegations in the history of direct Senate elections.”

This virtual event will begin at 6:30 p.m. eastern. Registration is free and can be found at this link, or just tune in at this direct link. If you can’t watch live, we’ll post the video at our YouTube channel, UVACFP, following the event.

This is the second of three forums we are hosting around the release of A Return to Normalcy? The first, featuring Crystal Ball Managing Editor Kyle Kondik; the Brennan Center for Justice’s Theodore Johnson; Georgetown University’s Diana Owen; and RealClearPolitics’ Sean Trende, is available here.

The third forum — “The Changing Face of America: Voters of Color in the 2020 Election” — will be next Thursday, April 15, at 6:30 p.m. The Brennan Center’s Johnson will moderate, and panelists are Andra Gillespie, Associate Professor of Political Science and Director of the James Weldon Johnson Institute at Emory University; Mark Hugo Lopez, Director of global migration and demography research at the Pew Research Center; and Natalie Masuoka, Associate Professor of Political Science and Asian American Studies at UCLA. That virtual event is also free; you can sign up here.