— There is a strong relationship between the 2020 presidential polls in the states and the 2016 results.

— This relationship makes sense given that there is an incumbent on the ballot. In these kinds of elections, we see a very high degree of consistency in the results at the state level.

— There are enough competitive states for Donald Trump to come back and win, but Joe Biden is considerably closer to the magic number of 270 than Trump, based on the polls.

Biden v. Trump in the polls so far

An analysis of recent state polls shows that the Democratic challenger, Joe Biden, holds a solid lead over the Republican incumbent, Donald Trump, with a little more than a month to go until Election Day. Based on state polling data compiled by FiveThirtyEight through the morning of Sept. 25, Biden is leading in 20 states with 298 electoral votes while Trump is leading in 15 states with 154 electoral votes. There is insufficient polling data available for 15 states and the District of Columbia with 86 electoral votes.

An analysis of the data compiled by FiveThirtyEight indicates that there is an extremely strong relationship between the results of the 2016 presidential election and the 2020 polling results. The correlation between Hillary Clinton’s margin in 2016 and Biden’s current margin across these 35 states is a remarkable .985. However, this relationship is only slightly stronger than the .97 correlation between Barack Obama’s margin in the 2008 election and his margin in the 2012 election across all 50 states and the District of Columbia. In these elections with an incumbent running for a second term, we see a very high degree of consistency in the results at the state level.

Given this high degree of consistency, we can use the results of a regression analysis of Biden’s 2020 margin on Clinton’s 2016 margin in the states for which polling data is available to project Biden’s current margin in the remaining states. The estimated regression equation is:

Table 1: 2016 Clinton margin and predicted 2020 Biden margin in the states

Source: FiveThirtyEight and analysis of polling data by author. Based on public polling data through early Friday, Sept. 25.

Table 2: Classification of state competitiveness based on polls and projections 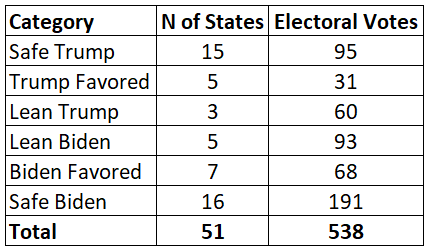 Source: FiveThirtyEight and analysis of polling data by author.

In 2016, Donald Trump shocked the political world by pulling off a victory in the Electoral College despite losing the popular vote by more than two percentage points. The key to his victory was winning several large swing states including Florida, Michigan, Pennsylvania, and Wisconsin by very narrow margins. Based on recent polling data, however, Trump appears unlikely to duplicate his 2016 feat. He is currently trailing in every 2016 swing state, including Florida, Michigan, Pennsylvania, and Wisconsin, although the margin in Florida is very close. Meanwhile, he is being forced to invest time and money defending several states that he won easily in 2016. In contrast, Joe Biden appears to be comfortably ahead in every state that Hillary Clinton won in 2016. Barring a major comeback in the final weeks of the campaign or very large and systematic polling errors, the incumbent appears to be headed for a decisive defeat in both the popular vote and the electoral vote.