— Buffalo, and the Western New York region that surrounds it, is further from its state’s population and political centers than almost any major city in the continental U.S. This has made it challenging for political leaders in the region to keep their political clout.

— Buffalo and Western New York have seen declines in population in recent decades. On top of this, the Democratic takeover of the state Senate in 2018 robbed the region’s Republicans of a bulwark against the political priorities of the New York City metro area.

— The elevation of Kathy Hochul, who is from the Buffalo area, to the governorship in 2021 could give the region a boost. But that may have to wait until she’s secured a term of her own this November.

A (Buffalo) NY state of mind

BUFFALO — This city on Lake Erie is the second largest in the nation’s fourth-largest state. But Buffalo, and the surrounding region known as Western New York, is more remote from the state’s population base (metropolitan New York City) and its levers of political power (Albany) than any other sizable metro area in the country.

Kathy Hochul, a Democrat who hails from the Buffalo area, ascended to the governorship in 2021 and is running for a full term this year. That makes her a rare governor from Buffalo and the first in more than a century. This could give Western New York a greater voice than usual in state politics, but the obstacles are steep.

Just how far is Buffalo from New York state’s center of gravity?

— At 357 miles, Buffalo is actually closer to Detroit (using a U.S.-only driving route) than it is to New York City.

Other states have long distances between population centers. In Illinois, it’s 373 miles from Chicago to Cairo, at the southern tip of the state. In Colorado, it’s 337 miles from Denver to the southwestern city of Durango. In Minnesota, it’s 317 miles northwest from Minneapolis to East Grand Forks. In Utah, it’s 302 miles southwest from Salt Lake City to St. George. And in Washington state, it’s 279 miles from Seattle east to Spokane. 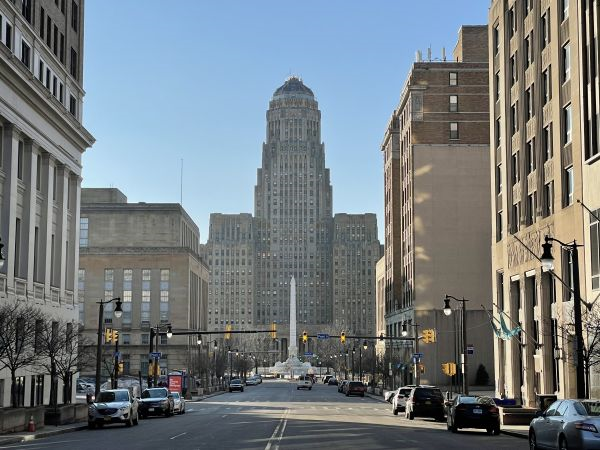 Buffalo’s distance from Albany and New York, combined with the dominance of metro New York City in the state’s politics, poses challenges for Buffalo and the surrounding region in advancing their interests. During a recent visit to Western New York, I interviewed a range of politicians and political experts to determine how well Buffalo and Western New York in general have been grappling with this challenge.

WNY overlaps with the western portion of Southern Tier — the counties of New York state that border northern Pennsylvania. (If you want to start an argument with a Western New Yorker, just ask whether WNY is considered “upstate” or not.)

In some ways, WNY has a “more midwestern” feel than the rest of the state, said George Borrello, a businessman and Republican who serves in the state Senate and was previously the Chautauqua County executive.

For generations, Buffalo’s role in state politics has been taken seriously, despite the distance, said Robert J. McCarthy, a longtime political reporter and columnist for the Buffalo News.

“If there’s a gubernatorial debate, there’s usually one here,” McCarthy said. “Anybody who is running for statewide office knows they have to come here.”

McCarthy acknowledged that WNY “is not New York City, it just isn’t.” Still, he said, “it’s important in its own way.”

That said, maintaining political clout in WNY has been undercut by population loss. The city of Buffalo has seen its population decrease by more than half since 1950, and the population of Erie County is down 15% since 1970. This has had consequences for the region’s congressional delegation.

“Back when Jack Kemp was an influential House Member and represented the Erie County suburbs, the Buffalo area, extending north to Niagara and south to Jamestown, had more than 4 seats,” said Rich Cohen, chief author of the Almanac of American Politics. “Starting next year, there will be arguably fewer than two seats. When the new redistricting takes effect, the seat in the Erie suburbs will extend north of Syracuse. And the district along the Southern Tier will extend from Jamestown considerably east and north of Binghamton.”

No longer are there direct flights between Buffalo and Albany, so elected officials must make the long drive regularly. Borrello, whose district exceeds 4,000 square miles in the state’s southwest corner, goes back and forth to Albany every week during the legislative session, driving himself.

Edward A. Sundquist, the Democratic mayor of Jamestown, has to travel 357 miles to get to Albany. When he attends conferences of New York mayors, “I always win the award for people traveling the farthest,” Sundquist said in an interview at his Jamestown office.

This distance has bred tension: Political veterans from the region speak of an “Albany mentality” that looked down upon people living in WNY.

Houghton, a moderate Republican who died in 2020, “was the Harvard-educated CEO of a Fortune 500 company, Corning.” Yet officials from New York City and Albany “would talk down to him,” Van Wicklin said in an interview in Olean.

Jacob Neiheisel, a University at Buffalo political scientist, agreed. “Certainly in the more rural areas, there’s a sense that Albany doesn’t quite understand what we need or what we do,” said Neiheisel in an interview in the Buffalo suburb of Williamsville.

Historically, these obstacles could be addressed by forging long-term personal relationships, experts said.

Success came from “winning big and moving up the ranks within leadership,” said Tom Buttafarro, a senior aide to several Republican legislators from WNY who now is director of government and community relations at St. Bonaventure.

For Sundquist, who was elected Jamestown mayor in 2019, it has meant reaching out to fellow Democrats, including Hochul. “The Senate and Assembly work with us, but sometimes it helps to call the lieutenant governor’s office or the governor’s office or my Democratic counterparts in Erie County,” Sundquist said.

In the years before Sundquist was elected mayor, Jamestown benefited from state funding to build the National Comedy Center, which opened in 2018. (Jamestown is the hometown of comedy legend Lucille Ball.) Jamestown also received funding from the state’s Downtown Revitalization Initiative, including support for the Robert H. Jackson Center, which furthers the ideals of the mid-20th century Supreme Court justice and chief U.S. prosecutor at the Nuremberg trial, said the center’s president, Kristan McMahon. 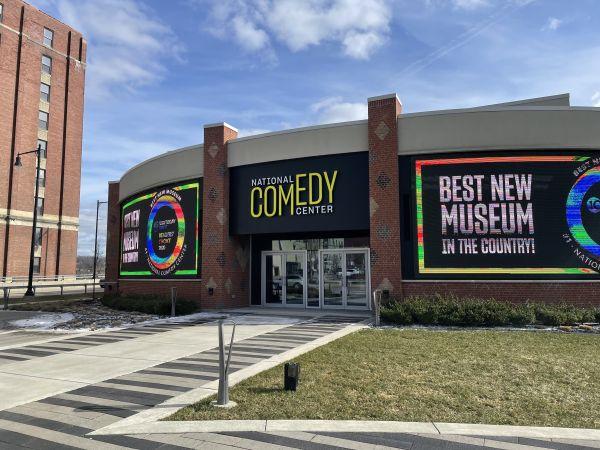 Currently, in addition to Hochul, other influential political figures from WNY include Assembly Majority Leader Crystal D. Peoples-Stokes and Timothy M. Kennedy, chair of the Senate Transportation committee. Both are Democrats from Buffalo. On the GOP side, the state party chair, Nick Langworthy, is from Erie County.

Hochul’s biggest proposal for the region may be taxpayer support for a planned $1.4 billion stadium for the Buffalo Bills. The proposal, which would cost a reported $800 million or more in public money, immediately became controversial for its price tag, especially among legislators in other parts of the state. This tracks with the long-running geographic divide in the state.

“I know that like me many of my colleagues are also taken aback by that last minute stadium proposal,” state Sen. Jessica Ramos, who represents a portion of Queens, told the New York Post. “If you were even to just to take a slice of that $800 million in order to help Buffalo with their child care situation, I bet you money that parents in Buffalo would be very appreciative of that.” As of this writing (Wednesday evening), the state budget negotiations were still playing out.

However the stadium debate plays out, a few recent developments have added to Western New York’s political challenges.

One was the takeover of the traditionally Republican state Senate by the Democrats in 2018. While there are Democratic strongholds in WNY, notably the city of Buffalo, and while the Buffalo suburbs have recently trended Democratic, WNY is much more Republican than the rest of the state.

“When the Republicans were still in the majority in the state Senate, that created some balance,” Borrello said. “Since losing the Senate in 2018, you’ve seen a dramatic shift to things being New York City-centric.”

This pattern was exacerbated by the coronavirus pandemic, several officials said.

“A lot of the conversation you heard here during COVID was the feeling that then-Gov. Andrew Cuomo’s rules and mandates were directed at very populated areas, which this area is not,” McMahon said in an interview in Jamestown.

While Cuomo’s office did seek to target behavioral restrictions according to local conditions, the determination “was still done at the county level,” said Neiheisel, the University at Buffalo political scientist. “So if you’re in a small town in a county, you’ll be tied to what’s happening in the big city.”

Other structural concerns have posed obstacles to flexing WNY’s muscle, experts said. Sometimes the rural parts of the Southern Tier have had to fight metro Buffalo for funding. One example is Route 219, the main route south from Buffalo to Olean; the interstate-quality road stops abruptly about 20 miles short of Olean, forcing traffic to navigate local roads the rest of the way.

In Olean, it’s widely believed that finishing the road simply isn’t a priority for more populated areas near Buffalo. (Further complicating matters is that the Seneca Nation has large landholdings in the area, and the nation’s relations with non-Native Americans have at times been tense.)

Another complication for WNY stems from the Buffalo Billion, a state project announced by Cuomo in 2012 to invest $1 billion in the Buffalo-area economy. While the program has achieved some successes including an expansion of solar panel manufacturing, the headlines that attracted the most attention had to do with convictions and guilty pleas by several Cuomo administration insiders related to corruption.

Assuming Democrats continue to hold power in Albany, that could be a problem for the Republicans who are becoming increasingly dominant in this part of the state. The region once elected moderate Republicans like Houghton and retiring Rep. Tom Reed, but the national bifurcation between increasingly conservative rural areas and more liberal cities and suburbs suggests that the prevailing politics in the region may be becoming more at odds with the state’s dominant Democratic Party.

“Western New York as a whole is probably more in the traditional Republican mold, but once you get into the rural areas, it’s more Trump Republicans,” Borrello said. Meanwhile, he added, “many of the Democrats in Western New York are working-class, not far-left Democrats like they are in New York City.”

The latter dynamic was on clear display in Buffalo’s mayoral race in 2021, when incumbent Byron Brown lost his primary to Democratic socialist India Walton. Brown then challenged Walton in the general election as a write-in candidate, eventually beating her by nearly 20 points, thanks to the backing of not only moderate Democrats but also Republicans.

“I can tell you from speaking to fellow business owners, many of them had been apolitical, but they stepped forward to help Brown,” Borrello said.

Hochul’s elevation to governor following Cuomo’s resignation in 2021 led some in WNY to hope that the region could boost its clout in state government, and that could happen if the stadium plan goes through. But while Borrello said he considers Hochul “a breath of fresh air,” he worries that the new governor has generally been focusing on building ties to the eastern part of the state, where she had been less well-known, in advance of her gubernatorial run this fall, rather than focusing on her home region.

Both parties in WNY “are still waiting for that big impact” from having Hochul in the governor’s office, Borrello said. “It’s only been a few months and there’s been lots to focus on. But we’re still hopeful.”