— President Trump remains a huge favorite to win renomination as the Republican presidential nominee, although he will have at least some opposition.

— The New Hampshire primary has historically tested the strength of presidential incumbents.

— In the primary’s modern history, incumbents who won easy victories went on to renomination and reelection, while those who struggled lost in the fall or didn’t run again.

— That said, we’re only talking about a dozen total contests, so don’t make any strong predictions based on the president’s New Hampshire showing. But depending on the circumstances, Trump’s eventual performance may provide some clues for the general election.

Presidential incumbents in the New Hampshire primary: A modern history

Last week, we assessed how a large field, proportional delegate allocation rules, and a frontloaded primary calendar might impact the Democratic presidential primary field. Such a granular analysis of the Republican presidential primary process does not seem warranted at this point, given that not only does President Donald Trump retain strong approval ratings among Republicans, but he also does not at this point face a significant rival for renomination.

As of now, Trump’s most prominent intraparty opponent is William Weld, a former Republican governor of Massachusetts who most recently was the Libertarian Party vice presidential nominee in 2016. Weld, who officially announced his challenge to Trump earlier this week, is not an unserious candidate or person. But it would be a stretch to call Weld a major challenger to Trump. We’ll have to wait and see if a bigger-name Republican, like Gov. Larry Hogan (R-MD) or former Gov. John Kasich (R-OH), ultimately decides to enter the race. Their decision-making is likely predicated on whether Trump’s approval with Republicans significantly dips over the course of 2019. So far, there hasn’t been any evidence of that, as Trump consistently scores approval ratings from his own party in excess of 80%.

In other words, there’s not much suggesting that Trump is in any real trouble within his own party, and he is, at least for now, a towering favorite to be his party’s standard-bearer in 2020.

That said, Trump will not be formally unopposed, and one assumes that Weld, a northeasterner, will try to make some sort of dent in Trump in New Hampshire, which in 2020 will celebrate its 100th year of leading the presidential primary season. It would be shocking if Trump lost New Hampshire, but he also won’t get 100% of the vote, as Weld and other candidates — surely ones even lesser known than Weld, and potentially ones better known — will pull votes from the incumbent. So it’s worth pondering: What share of the vote for Trump would represent a promising, or ominous, sign for him based on history?

New Hampshire has a long primary history, and it zealously guards its first-in-the-nation status. The Granite State held its first presidential primary in 1916, and it began to lead the nation in 1920. At that time, voters chose convention delegates whose candidate preferences were not indicated on the ballot, making it an imperfect measure of popular support. Still, the primary did exert some influence even then. For instance, New Hampshire Democratic voters in 1932 elected a slate of delegates pledged to Franklin D. Roosevelt over one that backed Al Smith, the 1928 Democratic nominee and FDR’s predecessor as governor of New York. But the primary’s modern importance really traces back to 1952; in advance of that crucial year, the state amended its primary to let voters directly vote for individual presidential candidates. Starting that year, there have been a dozen instances where an incumbent president was tested by the Granite State’s primary voters. The results for those races are listed in Table 1. 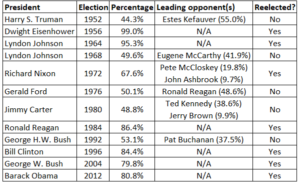 Sources: CQ Press for results prior to 1972; New Hampshire Public Radio for results from 1972-present.

Generally speaking, presidents who won renomination and reelection cruised through the New Hampshire primary. Meanwhile, presidents who struggled were not long for the White House.

Let’s go through some of the historical highlights.

In the initial year of the modern New Hampshire primary, 1952, the more historically famous result is the victory of Dwight D. Eisenhower over Sen. Robert A. Taft (R-OH), a frequent presidential aspirant, in the GOP primary. Ike was not even really a candidate at the time of the primary and never campaigned in New Hampshire, but his supporters placed his name on the ballot, and his strong performance helped set up his successful run to the Republican nomination and the presidency.

However, New Hampshire’s Democratic primary was also important in 1952. Despite his weak approval ratings in the midst of the Korean War, President Harry S. Truman spent the early part of the year mulling whether to seek a second full elected term in the White House. He let party leaders enter his name in the New Hampshire primary, but he lost to Sen. Estes Kefauver (D-TN). After suffering this “humiliating defeat,” as Truman biographer Alonzo Hamby described it, Truman decided against a run. The New Hampshire result was hardly the only reason behind his decision, but it was one of several factors that prompted him to step aside.

In 1968, New Hampshire ended up nudging another Democratic president out the door, this time Lyndon B. Johnson. Anti-war Sen. Eugene McCarthy (D-MN) held LBJ to a 50%-42% victory in the primary, although Johnson’s showing is more impressive when one considers that the incumbent president was technically a write-in candidate in that state. Still, as LBJ biographer Charles Peters notes, “the press transformed a Johnson victory into a Johnson loss.” Robert F. Kennedy, who was assassinated later that year, entered the race after New Hampshire, and Johnson announced that he would not seek a second full elected term. While “many of Johnson’s associates believed that the president clung to the hope of being drafted by the delegates,” Peters wrote, the nomination ended up going to Vice President Hubert Humphrey.

Four years later, President Richard M. Nixon (R) won a comfortable victory in New Hampshire, although he did only receive about two-thirds of the vote. He lost some votes to House members challenging him for different reasons. To Nixon’s left was Rep. Pete McCloskey (R-CA), a Vietnam War critic and progressive Republican; to his right was Rep. John Ashbrook (R-OH), an ideological conservative whose slogan was “No Left Turns.” The trio of Nixon, McCloskey, and Ashbrook represented three different strands of Republicanism: Ashbrook was the Barry Goldwater-style ideological conservative, McCloskey was the liberal, and Nixon was somewhere in between. As time went by, Ashbrook — who died unexpectedly while running for U.S. Senate in 1982 — represented more of the GOP future than McCloskey, who by 2004 would endorse Democrat John Kerry for president. Still, in the context of using New Hampshire to measure an incumbent president’s resilience, Nixon’s 68% share understated his strength, as he ultimately had little trouble winning renomination and reelection to a second term.

The Granite State would vote for the next two incumbent presidents on its ballot, the unelected Gerald Ford in 1976 and Jimmy Carter in 1980, but only by relatively small margins in the midst of competitive primaries for each against, respectively, Ronald Reagan and Ted Kennedy. Both incumbents would win their renomination fights but go on to lose to challengers from the other party in the fall.

The most recent incumbent who suffered a New Hampshire rebuke was George H.W. Bush in 1992. Bush faced a challenge from the right in the form of Pat Buchanan, who through his mixture of international skepticism and cultural conservatism is one of Trump’s intellectual antecedents in the GOP. Bush only won a bit over 50% in New Hampshire, and while Buchanan’s challenge would peter out, “his success was a wake-up call to Bush that he would have to fight hard to ensure that the Reaganite base came out to vote for him in November,” wrote Bush biographer Timothy Naftali. Bush ended up losing to Bill Clinton later in 1992.

The last three presidential incumbents who ran in New Hampshire — Clinton in 1996, George W. Bush in 2004, and Barack Obama in 2012 — all won against nominal opposition with around 80% of the vote.

Overall in the dozen New Hampshire primaries featuring presidential incumbents since 1952, seven incumbents have won easily and five have struggled to varying degrees. The seven who coasted all won reelection, although the two most recent examples, Bush in 2004 and Obama in 2012, only won by relatively small margins in the fall. Meanwhile, the five incumbent presidents who struggled in New Hampshire all saw their presidencies end the following January: Truman and Johnson eventually decided against running again, and Ford, Carter, and H.W. Bush all were renominated by their parties but ended up losing to general election challengers.

So what does this all mean for Trump? Well, it’s not as simple as saying his reelection chances depend on whether he gets a certain percentage of the vote in New Hampshire or not; after all, we’re only talking about a dozen past elections here, which is hardly a sample size that allows us to make far-reaching predictions. But it will be interesting to see how serious of a challenge Trump ultimately has in New Hampshire, and what share of the vote he gets.

There have been a couple of somewhat recent polls of the New Hampshire Republican primary, one from the University of New Hampshire’s Granite State poll and the other from Emerson College. The late February surveys showed Trump, respectively, at 68% and 82% in the primary, although Emerson doesn’t allow for undecideds.

Using history as a rough guide, and assuming that Trump doesn’t get a more prominent opponent than Weld, Nixon’s 67.6% share in 1972 probably represents a reasonable over/under for Trump in 2020. A performance at or above that mark probably would indicate that Trump’s currently strong standing in the GOP remains secure, while a performance significantly below might be a sign of weakness for the incumbent, if not in his bid for renomination then perhaps for the fall.