Dick Durbin (D-IL) is that rarest of Democrats these days — a senator who apparently contemplates but passes on retirement. While the Senate majority whip, who will turn 70 a couple weeks after Election Day 2014, is gearing up to run for a fourth term, four other Democrats have announced their retirements — Sens. Tom Harkin (IA), Frank Lautenberg (NJ), Carl Levin (MI) and Jay Rockefeller (WV) — and another, ex-Sen. John Kerry (MA), left the Senate after winning confirmation as secretary of state. A likely retiree, Sen. Tim Johnson (D-SD), has not yet made an announcement.

Such is life for Senate Democrats the past few cycles. In an institution where it’s common to overstay one’s welcome, members of the majority party have been retiring in droves this cycle and last despite, potentially, being able to run for another term. In 2012, Democratic Sens. Daniel Akaka (HI), Jeff Bingaman (NM), Kent Conrad (ND), Herb Kohl (WI), Joe Lieberman (the Connecticut independent who caucused with Democrats), Ben Nelson (NE) and Jim Webb (VA) all hung ‘em up.

Would Democrats prefer their incumbents to run? Sure. But the dangers posed to the incumbent party in open seat contests can be overstated, while the benefits — namely, subbing in new blood for old — can be understated.

It’s no secret that incumbency is rewarded in American politics: Even-numbered-year pleas to “throw the bums out” are both common and ignored. Since 1954, an average of more than eight of every 10 senators who run for reelection in a given year win another term (more than nine out of 10 who want another term in the House get it). Simply being an incumbent provides a solid advantage in Senate races.

But at the same time, in seats that do switch parties, the other party more commonly defeats an incumbent than captures an open seat. Over the same time period — the past six decades — 208 Senate seats have switched hands from one party to the other in regularly scheduled, November elections (Vital Statistics on American Politics does not include special elections in their calculations). Of those 208 party switches, 124 involved the other party defeating an incumbent, while only 84 involved taking an open seat from the retiring senator’s party. On average over the past six decades, about four Senate incumbents lose in November, while about three open seats flip to the other party.

Granted, this could just be because in any given Senate election, there are more incumbents running than there are open seats; over the past six decades, there has been an average of six retirements each cycle (that does not include resignations or deaths in office).

So it’s not like it’s necessarily easier to beat an incumbent than to win an open seat, although more often than not in recent years, the retiring senator’s party holds an open Senate seat.

Since 2000, 47 Senate retirements (24 Democrats and 23 Republicans) have created Senate openings that were contested in regular elections (that does not include senators who resigned, lost a primary or died in office). Of those 47, 30 — or about two-thirds — were held by the retiring senator’s party.

Here’s another way to look at it: Of the 47 open seats, in only nine instances did the new senator come from a different party than the one that won that state in the presidential race (if there was a presidential race that year) or, if it was a midterm, the party that won the state in the preceding presidential election. Basically, this recent history tells us that Democrats shouldn’t fret too much about open seats in Iowa, Michigan and New Jersey because they consistently support Democratic presidential candidates (more on this below), but they should worry about open seats in West Virginia and (potentially) South Dakota, which are Republican at the presidential level. The full breakdown of the 47 open seat, non-special election battles created by retirements are listed in Chart 1. Note 2004 in particular — Republicans won five Democrat-held open seats; it’s no coincidence that President George W. Bush carried all five of those states in his reelection bid that year. 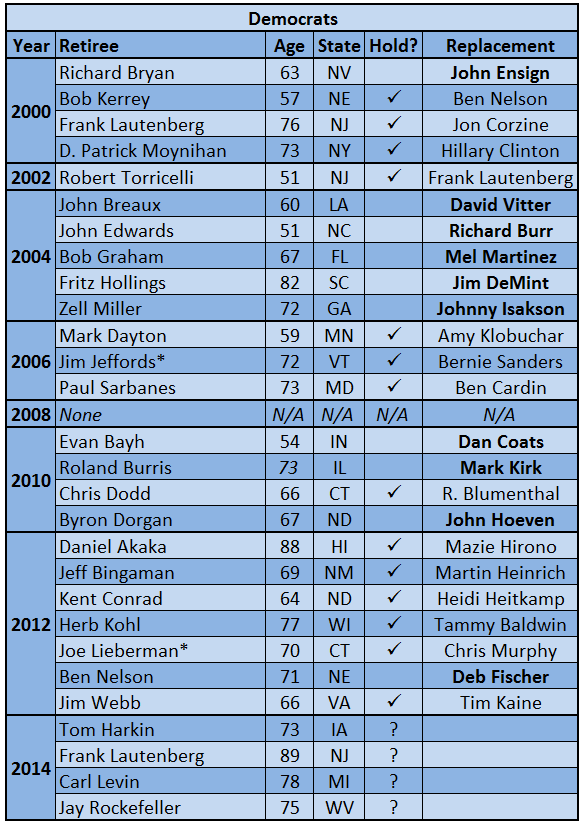 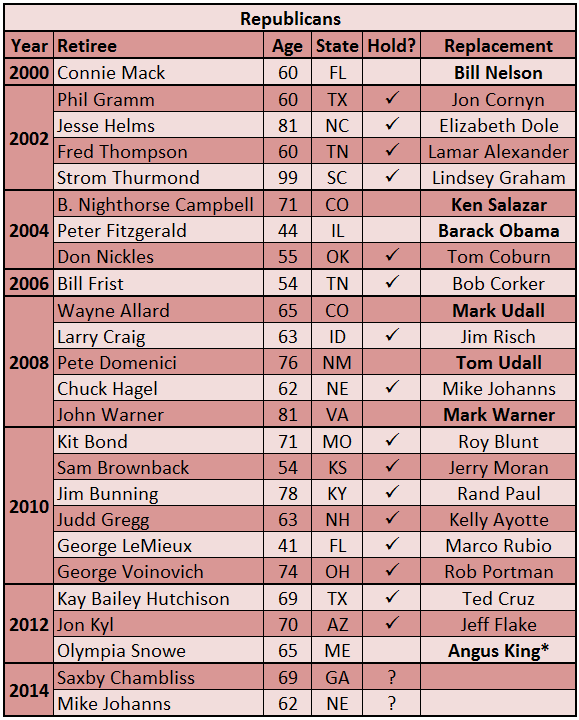 Notes: *Independents who caucus with Democrats. Only elections for full, six-year terms are included; appointed senators who do not run for reelection are counted as retirements. Races where incumbents lost a primary are not considered open seats.

In looking at Chart 1, the 2012 results in open seats ended up being fairly predictable: Democrats lost only Nebraska, a heavily Republican presidential state, and Republicans lost only Maine, a heavily Democratic presidential state (their other open seats were in Republican-leaning Arizona and Texas). But the Democratic hold of North Dakota was a surprise; despite giving Mitt Romney 58% of the vote, Democrat Heidi Heitkamp won the Senate seat. Given the power of incumbency and the weakness of Republican nominee Rick Berg, we imagine retired Sen. Kent Conrad (D) would have won too, but the upside for Democrats is that Heitkamp (57) is eight years younger than Conrad (65). Presumably, Heitkamp will be running again in 2018, whereas Conrad probably wouldn’t have been.

While replacing those long-time incumbents in 2012, the Democrats made their Senate caucus significantly younger: The average age of the seven retirees was 72, while the average age of the nine new Democratic senators elected in 2012 was 55 — more than a decade-and-a-half younger.

As noted above, Democrats will have a very hard time holding any open Senate seats in Red states. But if they can pull it off, they will undoubtedly improve their long-term odds of holding them in the future by subbing out old incumbents for new ones. Senate retirements are a headache for the party that holds the seat — but they are also an opportunity.

Since our last update — in mid-February — some major developments have forced rating changes in two Midwest states. Back then, we already knew that Harkin was retiring in Iowa, but since then, Rep. Bruce Braley (D-IA) has apparently edged out any credible primary competition, whereas uncertainty remains on the Republican side. The most credible GOP candidate, Rep. Tom Latham (R), decided to run for reelection to his swingy congressional seat, leaving the more conservative Rep. Steve King (R) as the likely Republican nominee, although he has not yet officially announced his intentions. It’s possible that another candidate will emerge on the Republican side, but without Latham in the race, the race LEANS DEMOCRATIC for now.

Meanwhile, the situation in Michigan after Levin’s retirement last week is pretty similar to Iowa. In both places, a veteran, liberal Democrat is retiring from his seat in a state that generally favors Democrats at the presidential level. And, just like Braley in Iowa, there appears to be a front-runner for the Democratic nomination — Rep. Gary Peters (D) — while there’s uncertainty on the Republican side. Attorney General Bill Schuette (R) might have made a strong candidate, but he is passing on a run. We’ll have to see if one of the members of the state’s House delegation gets in; the member likeliest to run seems to be libertarian Rep. Justin Amash (R), who is not liked by the state party. Rep. Mike Rogers (R), the chairman of the House Intelligence Committee, is also a possibility.

In a perfect year for Republicans, Michigan could go GOP in a Senate race — ex-Sen. Spencer Abraham (R) won his lone victory in 1994 — but a Republican presidential or Senate candidate hasn’t won the Wolverine State since. This race LEANS DEMOCRATIC.